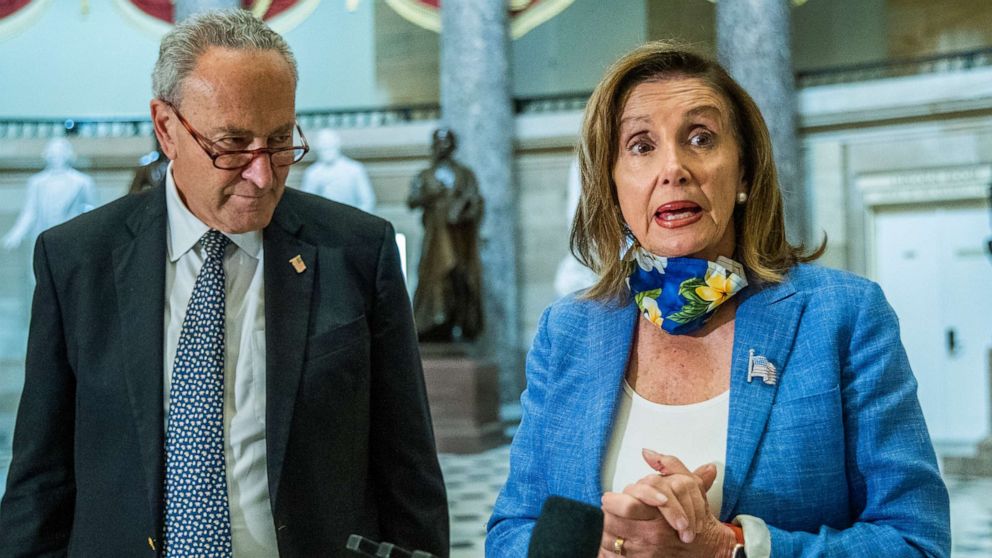 As Congress continues to flounder on a path forward for the next phase of coronavirus relief, President Donald Trump said Monday that he was considering executive action if Congress fails to act.

It is not clear at this time what sort of unilateral steps the administration is considering taking without the input of Congress, though throughout negotiations on Capitol Hill, members of the administration have consistently stated that the president is keenly focused on unemployment benefits and protections for homeowners and renters.

“Unilateral action is certainly an option if the Democrats continue to find a plethora of ways to say no to reasonable options,” a senior administration official told ABC News.

Treasury Secretary Steve Mnuchin and the president’s Chief of Staff, Mark Meadows, did not respond to questions from reporters on Capitol Hill on Monday about any possible executive action by Trump.

U.S. Treasury Secretary Steven Mnuchin leaves Nancy Pelosi’s office after a meeting with Speaker Pelosi and Senate Minority Leader Chuck Schumer on the eve of the expiration of the CARES Act on July 30, 2020 in Washington.

U.S. Treasury Secretary Steven Mnuchin leaves Nancy Pelosi’s office after a meeting with Speaker Pelosi and Senate Minority Leader Chuck Schumer on the eve of the expiration of the CARES Act on July 30, 2020 in Washington.

Congress has been locked in a stalemate for weeks over how to move forward with a COVID-19 relief bill as several benefits and protections granted in the previous relief bill have expired.

Perhaps the most contentious negotiations have surrounded the $600-a-week expanded unemployment benefits passed in the last stage of coronavirus relief.

Democrats have argued that this benefit, which has since lapsed, was an essential lifeline for struggling Americans.

But Republicans have said that the benefit was paying some workers more than their previous earned income, and in turn was a disincentive to return to work. On Thursday, Republicans attempted to pass a reduced expansion of the unemployment program which would have paid unemployed Americans a $200 weekly bonus through the end of the year.

“We are creating a very perverse incentive for people to remain unemployed when our economy is calling for more workers,” said Sen. Ron Johnson, R-Wis., who proposed the extension.

But the move was blocked by Democratic Leader Chuck Schumer, who said the measure was a political stunt by Republicans.

“Even if we were to pass this measure the states say people would not get their unemployment for weeks and months all because of the disunity dysfunction of this Republican caucus,” Schumer said.

Democrats also blocked an attempt by Republicans to expand the $600 weekly unemployment benefit for a single week on Thursday.

While the Senate continues to squabble, negotiations between the administration and Democratic leadership are continued on Capitol Hill Monday.

Mnuchin and the Meadows met with Schumer and House Speaker Nancy Pelosi to discuss the bill again after over a week of tense negotiations.

Pelosi described Monday’s meeting as “productive” and “moving down the track” but said that there are still differences as the parties work to “understand what the needs are.”

Schumer said that they spent time during Monday’s negotiations going through the respective proposals by Democrats and Republicans.

“By going through the specific numbers and what each side thinks they can do with their dollar allocation, it really helps us understand that and move together in a better direction,” Schumer said.

The cost of the Republican proposal as it currently stands is around $1 trillion. The Democratic bill costs about $3 trillion to implement.

Mnuchin and Meadows have so far been unsuccessful in attempts to negotiate for a slimmed-down package.

Leaving their meeting on Monday, Mnuchin said, “We’re open to a bigger package if we can reach an agreement” and added that they are “a little bit” closer to a larger package.

But moments later, Meadows contradicted him, saying that the parties are so far apart that being open to more than $1 trillion is “not even a valid question.”

On Sunday, Mnuchin appeared on ABC’s “This Week” and said he and Meadows will be on Capitol Hill “every day until we reach an agreement.”

Following the Monday meeting, Mnuchin said he and Meadows will return to the Hill to continue negotiations on Tuesday.

Negotiations over the newest phase of coronavirus relief have been fraught with partisanship from the onset. Democrats in the House passed a $3 trillion relief bill in May, but it was not taken up by the Senate and the majority leader, Sen. Mitch McConnell, dismissed the Democratic effort as “partisan wish list.”

After a stall within their own conference, Republicans released their proposed bill on July 27. Schumer responded to the bill calling it “half-baked,” “half-hearted” and “too little too late.”

What to know about the coronavirus:How it started and how to protect yourself: Coronavirus explainedWhat to do if you have symptoms: Coronavirus symptomsTracking the spread in the U.S. and worldwide: Coronavirus map

Tune into ABC at 1 p.m. ET and ABC News Live at 4 p.m. ET every weekday for special coverage of the novel coronavirus with the full ABC News team, including the latest news, context and analysis.

Don't Miss it Canada reports 147 new coronavirus cases as the country celebrates the Civic Holiday – National
Up Next Dating, partnership and loneliness in times of the coronavirus crisis | COVID-19 Special