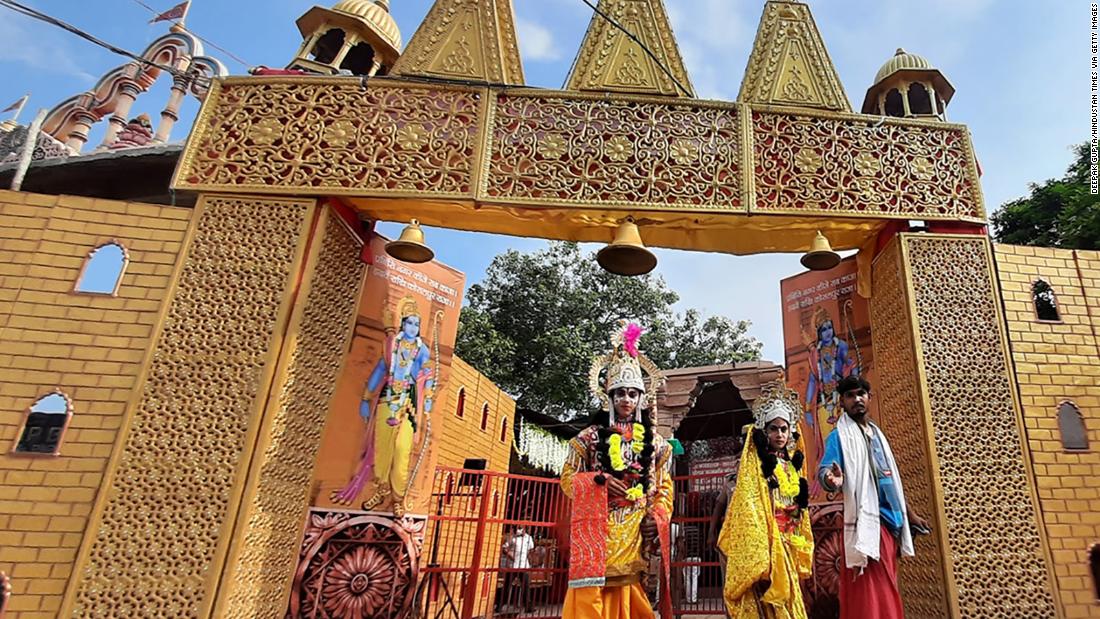 On Wednesday Modi laid a 40 kilogram (88 pound) silver brick in a ceremony attended by 175 dignitaries including 135 religious devotees in Ayodhya, a town in Uttar Pradesh state.

For decades, Hindu groups have campaigned for a temple to Lord Ram be built at the site where a 16th-century mosque stood before it was demolished by right-wing groups in 1992.

The destruction of the Babri Masjid by Hindu extremists sparked some of the worst violence seen in India since independence, with more than 2,000 people killed in nationwide rioting.

In a speech Wednesday, Modi said that the temple would be a symbol of unity.

“Centuries of waiting is over today. Some people will not be able to believe that they are seeing this during their lifetime,” he said, removing his coronavirus face mask to speak.

“Ram Temple will be a modern signifier of our ancient culture, it will be an example of our patriotic fervor, it will be a symbol of the strength of will of our citizens,” he said. “This temple will unify the country.”

Wednesday’s ground laying ceremony went ahead as India’s coronavirus cases spiral, with around 50,000 new infections recorded every day for the past five days. Before the ceremony began, live streamed video showed that social distancing measures were not being practiced, although those measures were in place during the ceremony.India has recorded the third-highest number of coronavirus cases worldwide, according to data from Johns Hopkins University, and several high profile politicians in Modi’s Bharatiya Janata Party (BJP) have tested positive for the virus, including Home Minister Amit Shah, who was set to appear on stage Wednesday with the Prime Minister. A priest who conducts daily rituals at the Ayodhya site and four security guards also reportedly tested positive in the run up to Wednesday’s ceremony, according to CNN affiliate CNN News18.

Uttar Pradesh Chief Minister Yogi Adityanath was on stage with Modi despite the death on Sunday of Kamal Rani Varun, a minister in his cabinet who died from Covid-19. In a speech, he said the “historic moment” was carried out in accordance with Covid-19 guidelines.

Adityanath said in a statement on Monday that “the main focus is keeping in mind Covid-19 and strictly implementing guidelines” and that only those invited should attend. “All steps are being taken to ensure their safety, I appeal to all devotees to remain where they are, in their homes, in their temples,” he said.

Ahead of the event, the District Magistrate of Ayodhya, Anuj Kumar Jha, sought to calm fears of the virus spreading, saying, “We will conduct this program in a Covid-free manner.”

“If any person is positive, we will isolate and remove them, and disinfection and sanitization will be carried out constantly during the program,” Jha said in a statement on July 30, adding that everyone working at the event is being monitored.

At the ceremony, Modi performed a prayer as nine foundation stones were laid, marking out the coordinates of the temple’s innermost sanctuary. Holy water from 2,000 locations across the country was sent by devotees and was used in the prayer ritual, according to the group in charge of constructing the temple, the Ram Janmabhoomi Trust.

In the run up to the ceremony, Ayodhya underwent a makeover, with freshly painted houses and saffron flags put up around the town.

Prior to the ceremony, the Ram Janmabhoomi Trust said the event “will be the most historic moment in the history of independent India.”

Others said it is the culmination of years of Modi and his BJP government’s policies that have pushed a Hindu nationalist agenda onto secular India, and polarized Hindus and Muslims.

The Babri Masjid was built on a disputed site in Ayodhya in the 16th century and the town has been a religious flashpoint for more than 400 years.

For Hindu groups, the laying of the temple’s foundation stone is significant because the spot is believed to be where Lord Ram, one of the most revered deities in Hinduism, was born.

However, Muslims have also been praying at the site for centuries. Both communities have lodged legal complaints and suits for decades until the Supreme Court’s ruling in favor of the Hindu temple.

The ruling was seen as a blow to India’s estimated 200 million strong Muslim minority, many of whom accuse the government of treating them as second-class citizens following the BJP’s apparent endorsement of Hindu nationalist polices.

At the time, Asaduddin Owaisi, the president of Muslim political party AIMIM, said the judgment to allow the construction of temple was a “victory of faith over facts” which the BJP would use to achieve its “poisonous agenda.”

Laying the stone is a victory for Modi’s BJP as it fulfills a key election promise to build the temple at Ayodhya.

It was the issue of Ayodhya that first helped the BJP to gain significant electoral ground. The dispute over the religious site was seized on by the BJP to help secure over half the seats in Uttar Pradresh’s 1991 state elections, one year before the deadly riots.

While India is a secular nation in its constitution, the BJP has its roots in India’s Hindu right-wing movement and many followers of which see India as a Hindu nation.

The Uttar Pradesh Chief Minister Adityanath, a Hindu priest known for his nationalist views and provocative rhetoric against Muslims, called Wednesday’s Ayodhya event “a historic and emotional moment, as well as an opportunity to set precedent for a new India.”

Wednesday also marks one year since the Prime Minister made the surprise decision to scrap a constitutional provision that granted the state of Jammu and Kashmir relative autonomy — another major election promise.

The move gave New Delhi more control over the Muslim-majority state’s affairs and threw the already restive region into turmoil as tens of thousands of new troops were deployed and residents were plunged into a communications blackout, with internet services suspended, travel curfews and roadblocks put in place. One year on, internet services are partially restored and international rights groups have repeatedly called on the government to end the restrictions.