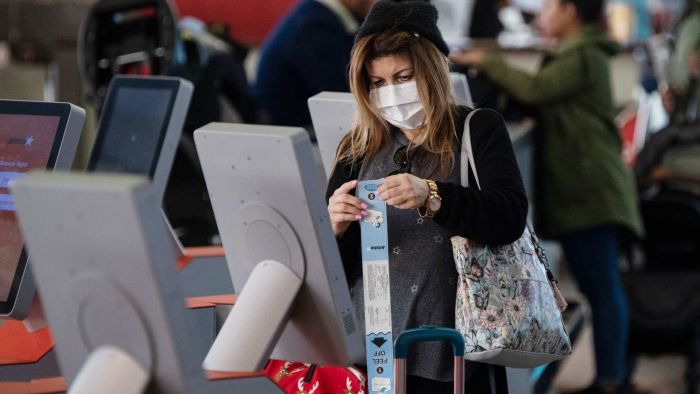 As Victoria’s coronavirus cases remain high and Melbourne enters stage 4 restrictions, some political leaders in NSW have called for those entering the state from the southern border to be treated as if they were international travellers.

The State Opposition leader, Jodi McKay, yesterday called for Victorians entering NSW to be placed into mandatory hotel quarantine for two weeks at their own expense.

She said the Berejiklian Government shouldn’t draw a distinction between Melburnians and international travellers, saying “Victoria is now no different from … any other part of the world”, and adding Victorians were “another Ruby Princess” waiting to happen.

“Let’s not sleepwalk into disaster … that’s my fear because the Premier won’t act,” she said.

Passengers are subjected to health and permit screenings at Sydney airport.(AAP: James Gourley)

However, NSW health authorities have so far refused to implement compulsory quarantine measures for most of those entering the state, by road or air, from the southern border.

Here are some of the reasons they’ve given so far.

NSW Health Minister Brad Hazzard defended its protocol around flights into regional and metro airports from Victoria and said the current arrangements were “set up for a reason”.

Mr Hazzard said anyone flying into a NSW airport without a valid permit or reason would be referred to NSW Police and then taken to the “Special Health Accommodation” to complete 14 days of quarantine.

“There are only limited reasons anyone from Victoria should be entering NSW and people have been turned back despite being allowed on the plane in Melbourne,” he said.

Those with a valid permit would then be subjected to an “onerous” screening process at the airport, which could last anywhere between 20 minutes to an hour.

Space to play or pause, M to mute, left and right arrows to seek, up and down arrows for volume.WatchDuration: 1 minute 34 seconds1m 34s Dr Teresa Anderson says the risk management approach is a good thing for NSW residents.(ABC News)

NSW Health nurse Sarah Jane Nilsson, health commander managing the screening process at domestic airports, said up to about 200 people were arriving each day on flights from Melbourne.

Ms Nilsson said upon arrival, all passengers from Victoria are given masks and hand sanitiser before having their temperature checked, are given a health screening about their health and have their permit rigorously checked.

“Anyone who we can’t confirm their identification would be escalated and we would not be letting them through until we were satisfied that we had the correct details,” she said.

Passengers with a high temperature or who didn’t pass health screening are placed into a “pre-defined area for symptomatic passengers” and a decision would be made “on an individual basis” about whether they would need to be taken to a health hotel.

NSW Police are also stationed at airports and passengers are required to be escorted by officers if they need to use the bathroom.

“We remind them about hand hygiene, we check that they have a mask for that travel in the taxi or the Uber and we also check that they know how to fit the mask,” Ms Nilsson said.

Passengers going into home isolation are also told ahead of time they’re not able to use public transport and would be called to make sure they’ve arrived home.

Lori Birch, who flew into Sydney in transit to Byron Bay for her father’s funeral, said the experience at Sydney Airport was thorough.

“The health workers, the police, they’re checking everyone,” she said.

Many travellers from Melbourne told the ABC at Sydney Airport they were staying in the city for one night before flying onwards to their home country.

The State Government said special NSW Health accommodation was also made available for confirmed infections who weren’t able to self-isolate at home.

NSW Health has not yet provided precise compliance figures for self-isolation orders as requested by the ABC, but it is understood those figures are significantly higher than Victoria.

As well as turning people without valid permits around both at the southern border and at airports, NSW Police said it has so far conducted 23,000 compliance checks.

“Over the weekend, NSW Police visited almost 600 homes to check that those who were meant to be self-isolating were doing so,” NSW Health said in a statement.

“In addition to that, over the same period, NSW Police received 374 calls to Crime Stoppers reporting suspected breaches of the health orders, the majority of which were for people suspected of not following self-isolation rules.”