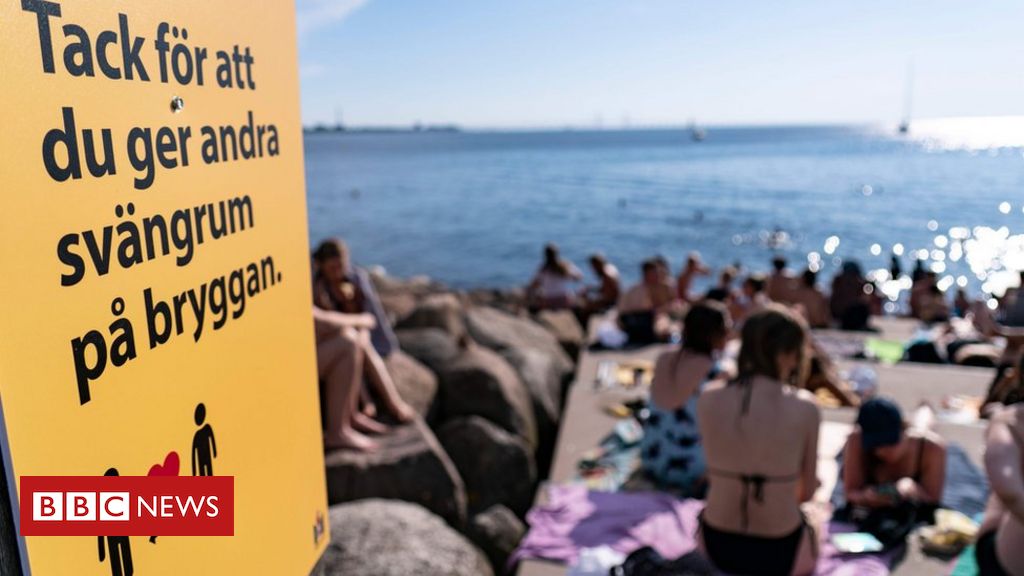 Crowds in Malmo are being urged to maintain social distancing

Sweden, which avoided a lockdown during the height of the Covid-19 pandemic, saw its economy shrink 8.6% in the April-to-June period from the previous three months.

The flash estimate from the Swedish statistics office indicated that the country had fared better than other EU nations which took stricter measures.

However, it was still the largest quarterly fall for at least 40 years.

The European Union saw a contraction of 11.9% for the same period.

Individual nations did even worse, with Spain seeing an 18.5% contraction, while the French and Italian economies shrank by 13.8% and 12.4% respectively.

Sweden’s economy is doing better than other European nations

“The downturn in GDP is the largest for a single quarter for the period of 1980 and forward,” Statistics Sweden said.

“It is, as expected, a dramatic downturn. But compared to other countries, it is considerably better, for instance if you compare to southern Europe,” said Nordea bank chief analyst Torbjorn Isaksson.

Sweden has largely relied on voluntary social distancing guidelines since the start of the pandemic, including working from home where possible and avoiding public transport.

Although businesses have largely continued to operate in Sweden, the country’s economy is highly dependent on exports, which were hit by lack of demand from abroad.

The authorities here have always said the country’s Covid-19 strategy wasn’t designed to protect the economy. They have stressed that the aim was to introduce sustainable, long-term, measures.

But the government did hope that keeping more of society open would help limit job losses and mitigate the effect on businesses.

The latest figures are a sign of just how vulnerable Sweden is to global economic shifts. Like other Scandinavian nations, it has a small, open, economy that is dependent on international trade.

The results also suggest that, while more of society remained open than in other parts of Europe, plenty of Swedes still chose to stay away from shops, restaurants and gyms.

Recent opinion polls have suggested declining confidence in the minority government’s handling of the pandemic. If the economy continues to worsen, there may be sharper national debates about the decision not to lockdown and the subsequent early high death toll.

But given the rapid drop in daily recorded deaths since July, supporters of the controversial strategy are hopeful that the measures here will help provide long-term stability.

Despite the contraction, Sweden is not yet in recession, since the first quarter saw growth of 0.1%.

An economy is generally deemed to be in recession if it contracts for two consecutive quarters.

Various forecasts predict the Swedish economy will still shrink by about 5% this year.

That is less than other countries hit hard by Covid-19, such as Italy, Spain and the UK, but still similar to the rest of Scandinavia.

Sweden’s unemployment rate of 9% remains the highest in the Nordics, up from 7.1% in March.