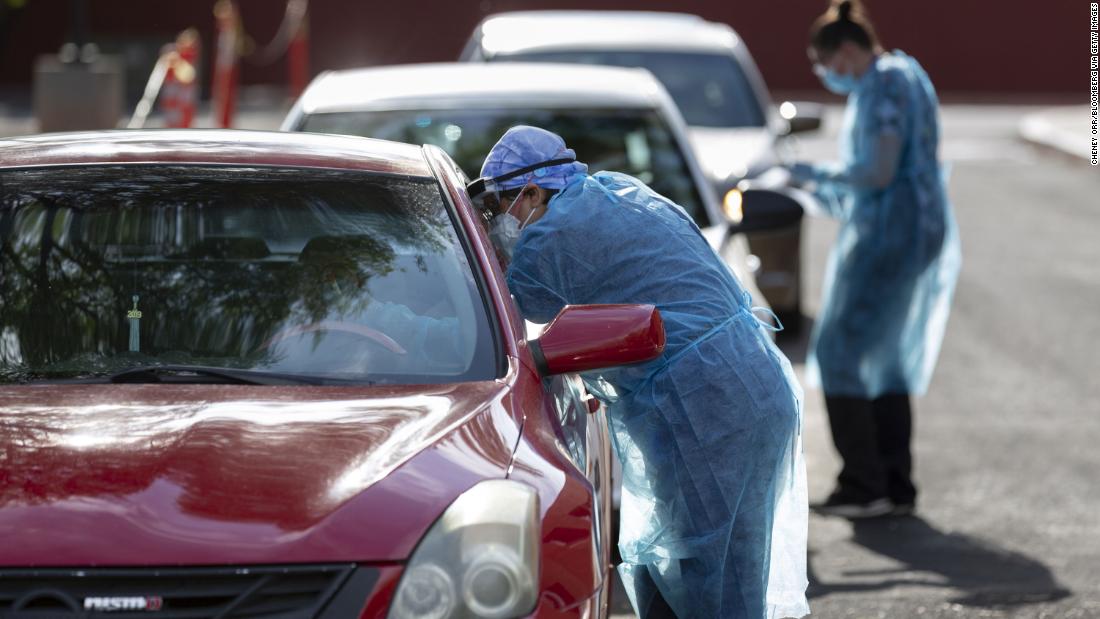 Today, that decision appears to have paid off.

This turn around has caught the attention of health experts, who have praised Arizona as an example of a state that successfully reimplemented mitigation efforts as cases rose.

“We saw in Arizona, which was a good example, they went up (in cases) and they started to really clamp down and do things right. And the cases came right down,” Dr. Anthony Fauci, the director of the National Institute of Allergy and Infectious Diseases, told CNN’s John Berman on Thursday morning.

The state and its governor, Doug Ducey, were praised on Wednesday by President Donald Trump and Dr. Deborah Birx in the Oval Office, where Ducey credited the downward trend to Arizonans wearing masks, physically distancing, washing hands and staying home if sick.

“They’ve really done a great job putting these pieces together and really creating that path forward,” Birx, the White House coronavirus response coordinator, said. She pointed to the improvement in Arizona as a model that could work for other states.

Of course, while things are improving, the state — like the rest of the country — is not in the clear.

Arizona reported nearly 1,400 cases on Thursday, bringing the statewide total to more than 183,000. And the number of deaths continues to climb, with more than 4,000 total deaths as of Thursday.

“This is not a victory lap,” Ducey said last week after discussing the state’s downward trend. “This is not a celebration. If anything, it’s evidence that the decisions and the sacrifice that Arizonans are making are working.”

How Arizona did it

Arizona’s downward trend in cases came after the state reimposed coronavirus restrictions amid a summer surge.

“We did take some further steps,” Ducey said on Wednesday. “We were in the unhappy but responsible position of dispersing large crowds, so bars and nightclubs and gyms all closed temporarily,” he said.

“But upon putting those steps out there, we’ve seen improvement every week, week-over-week for four weeks,” he said.

Arizona first started lifting stay-at-home restrictions in early May, with Ducey saying that cases were declining and that “Arizona is heading in the right direction.”

Then things went downhill from there. Cases rose throughout the month of June, totaling 79,228 on June 30 — up from 20,129 on June 1. The state was forced to try and rectify the situation before it spun out of control.

“The Covid-19 crisis didn’t hit Arizona until later,” Ducey explained. “We had a very difficult June, we’ve had a much better July.”

The governor paused the state’s reopening on June 29. He issued an executive order closing down bars, gyms, movie theaters and water parks for at least 30 days. The order also prohibited large events of more than 50 people, just days before the Fourth of July.Additionally, the governor encouraged Arizonans to “mask up,” one week after he said he wouldn’t require thousands of people attending a Trump rally in Phoenix to wear them. Still, he stopped short of issuing a statewide mandate.

At the time, Ducey warned his state it would take time for the restrictions to be reflected in the state’s Covid-19 numbers.

“Our expectation is that next week, our numbers will be worse,” he said. “It will take several weeks for the mitigations we are putting in place to take effect.” A week later, the state’s department of health reported that Arizona had surpassed 100,000 cases.

In early July, the state was paid a visit by members of the White House coronavirus task force, including Birx and Vice President Mike Pence. A few days later, on July 9, Ducey took another step back, limiting indoor dining to 50% capacity before things started looking up.

The average of new daily cases over a seven-day period began steadily declining each week, something the governor touted in his visit to the Oval Office on Wednesday.

Despite the improvement, Ducey recognizes that the Grand Canyon State was not out of the woods.

“Like I said, no celebration, no victory lap,” he said. “We’re going to stay the course, stay vigilant and keep our guard up. But we have a path forward in Arizona.”

Don't Miss it U.S. health officials warn of ‘trouble ahead’ in coronavirus battle – Video
Up Next Berlin protests for and against coronavirus restrictions as cases soar in Germany | DW News