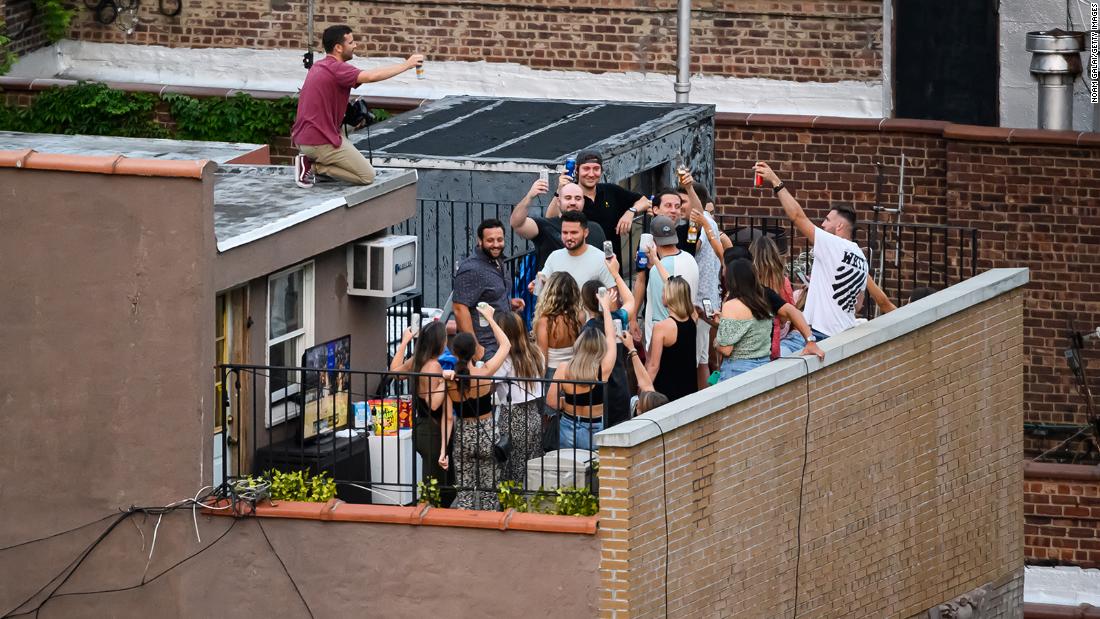 “It’s a profoundly sad number” of projected death, Dr. William Schaffner of Vanderbilt University told CNN on Friday morning. “And we can think that 70,000 of those people could be saved if we would all just wear a mask every day every time we leave our front doors.

“This virus Is not just going to disappear or vanish. The virus is with us, and we’re going to have to combat it, and the simple thing that we can all do is wear a mask. Please, everyone, wear your mask every day.”

Added CNN chief medical correspondent Dr. Sanjay Gupta on Friday: “That number of lives saved could be even higher if we did this,” noting that masks could cut transmission by more than the model’s basis of 40%.

As the number of US cases races toward 5 million, the Covid-19 pandemic is moving into younger populations, health experts said Thursday, with cases skyrocketing among children, teens and young adults.

Early in the outbreak, health experts stressed that older adults were most at risk, but new data from the World Health Organization shows that most cases — by far — are among people 25 to 64 years old. The proportion of cases in teens and young adults has gone up six-fold, and in very young children and babies the proportion has increased seven-fold, WHO said.

The increase might be explained by broader testing, greater detection of milder cases and shifting demographics of hot spots, but “a rise in risky behavior after easing of public health and social measures” is also to blame, WHO said.

In Georgia a 7-year-old child with no underlying conditions became the youngest person in the state to die of the virus.

In New Mexico, where a fifth of cases are among people 20 to 29, the state’s Human Services Secretary Dr. David Scrase urged people not to plan big gatherings for Labor Day.

“Just do that cookout with the people you live with,” Scrase said Thursday. “Don’t get the family together. There will be more time to do that.”

In Georgia, everyone should continue wearing masks, washing hands and practicing social distancing to bring down infection rates, Lt. Gov. Geoff Duncan told CNN Friday. He was responding to questions about a photo showing a crowded hallway in a high school where students are not required to wear masks — and most did not.

The state allows local districts to set their own rules about preventive measures, he said.

Across the country, more than 160,000 people have died of coronavirus so far, and that number could nearly double by December, the director of a leading model said Thursday.

“It’s rare that you see something so simple, so inexpensive, so easy for everybody to participate in can have such an extraordinary impact in the US and also all over the world,” Murray said.

The US Centers for Disease Control and Prevention updated its website, urging people not use masks with valves or vents. While the one-way valve keeps people cooler, it also means respiratory droplets that carry the virus can escape and infect others.

Balancing rush for a vaccine and ‘ethical principles’

Vaccines are being developed quickly, but health experts caution they will only be released to the public once they are safe.

“When the vaccine becomes available after a 30,000-person-or-more placebo-controlled randomized trial, and it’s shown to be safe and effective, I would get it any time within the time frame of the people who prioritize it according to ethical principles,” Dr. Anthony Fauci, director of the National Institute of Allergy and Infectious Diseases, told the Politico Pulse Check podcast.

He said he is “satisfied” with the first week enrollment in Moderna’s Phase 3 clinical trial for a coronavirus vaccine, which saw 1,290 people randomly assigned to get either the vaccine or a dummy shot. Moderna plans to enroll 30,000 people in its trial.

Fauci expects “to get an answer” about whether the vaccine works in November or December, he told CNN.

President Donald Trump hopes to know much sooner. He said Thursday he is “optimistic” that a vaccine could be ready by Election Day on November 3.

But giving specific dates for when a vaccine could be available is “very dangerous,” former Surgeon General Dr. Vivek Murthy told CNN Thursday.

“We can’t sacrifice our standards because if we do, it not only hurts people, but it’s going to damage people’s faith in vaccine efforts,” Murthy said.

Experts call for a national plan

Federal officials have often been at odds with local leaders and health experts, and five former directors of the CDC said it is time for national leadership against the pandemic.

The CDC being sidelined early on and contradictory messages from the Trump administration has led to partisanship, confusion and increased spread of the virus, Frieden said.

“These are lives we can all save if we all wear masks, and we need national direction to do that,” Vanderbilt’s Schaffner said Friday.

In the absence of national leadership, state officials have been taking measures against the virus into their own hands.

Louisiana Gov. John Bel Edwards extended bar closures Thursday and announced the state will stay in Phase Two of its reopening plan, while New York City Mayor Bill de Blasio extended the city’s state of emergency, which was first signed in March, for another 30 days.

Don't Miss it Coronavirus outbreaks grow in Victorian group homes for people living with disabilities
Up Next Coronavirus conspiracy theories: Why do people fall for them? | COVID-19 Special