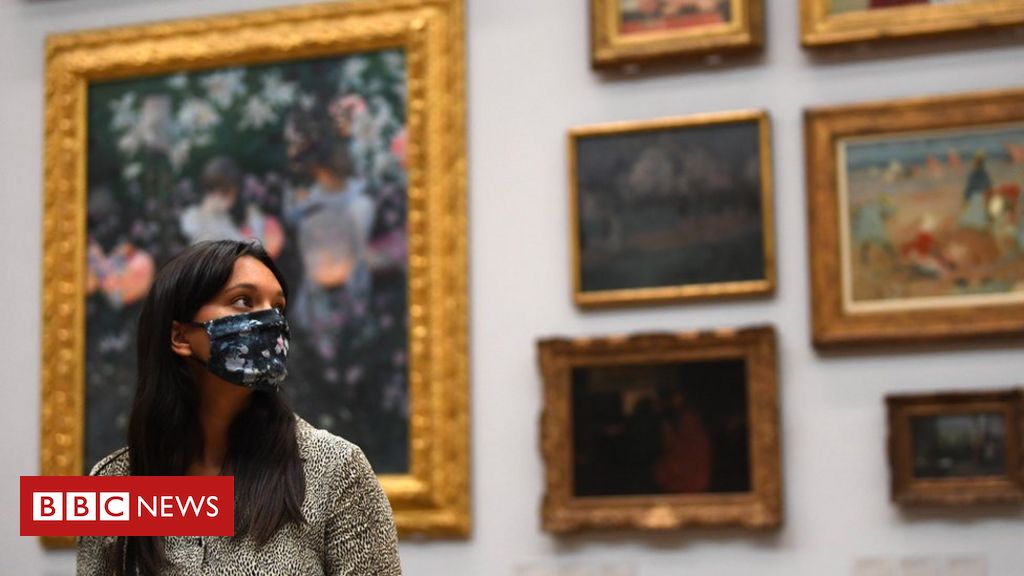 Face coverings have become mandatory in more indoor settings in England and Scotland following a recent spike in coronavirus cases.

Places where coverings must now be worn in both countries include museums, places of worship and aquariums.

Other new settings in England include cinemas and funeral homes, and in Scotland banks and beauty salons.

Coverings will also become compulsory in all public enclosed spaces in Northern Ireland from Monday.

It comes as new quarantine rules for travellers to the UK took effect at 04:00 BST.

Anyone now arriving in England, Scotland or Northern Ireland from Belgium, Andorra and the Bahamas will have to quarantine for two weeks. The same rules have already been put in place in Wales.

Quarantines were earlier re-imposed for passengers from Spain and Luxembourg.

And lockdown measures were reintroduced in Preston from midnight after a rise in Covid-19 cases. Residents in the Lancashire city are facing stricter restrictions, which include banning separate households from meeting each other at home.

The move brings Preston in line with measures in east Lancashire, Greater Manchester and parts of west Yorkshire. The number of cases in Preston has jumped sharply in the past week, and almost half are among younger people.

Prime Minister Boris Johnson announced the changes to the rules on face coverings in England last week when he also postponed the further easing of lockdown due to the spike in virus cases.

Those who break the law on wearing masks in England face fines of up to £100, with the PM saying there would be a “greater police presence” to ensure the rules were being followed.

Scotland’s First Minister, Nicola Sturgeon, announced the new face mask rules, along with other measures, on Friday, explaining that the “risks are heightened” as the country eases lockdown restrictions.

In Wales and Northern Ireland it is only currently compulsory to wear a face covering on public transport.

Media captionCoronavirus: How to wear a face covering

“Face coverings are becoming more ubiquitous, people wear them on public transport, in other leisure environments,” he said.

But Mr Bradon said customers would be able to remove their masks to eat and drink in its cinemas.

He added: “We recognise that some people will be exempt so it is appropriate that we encourage people to wear them but we won’t be policing it.”

London’s Science Museum said while customers would be required to wear face masks in line with government guidance when it reopens on 19 August, it hoped visitors would be “respectful” of those who were exempt from doing so.

Those exempt from wearing face coverings include children under 11, those with a physical or mental illness or impairment or disability and employees in indoor settings.

People are also able to remove their mask if asked to do so in a bank for identification or in order to receive treatment or services, such as a haircut.

Under the government rules face coverings are not required for those getting married or at restaurants, bars and pubs with table service.

In Scotland, the expanded list of settings where masks are required was announced alongside the tightening of other anti-coronavirus measures, particularly for the hospitality sector.

From Friday 14 August the recording of contact details for customers of pubs and other venues will become mandatory rather than advisory.

Businesses should also be asking people to pre-book tables and there should be no queues.

On Friday, the UK reported a further 98 people had died with the virus, taking the total to 46,511, with a further 871 people testing positive for Covid-19.

Also on Friday, the latest reproduction number – the R number – for the UK was published and was estimated to be between 0.8 and 1.0.

However, SAGE, the government’s scientific advisors, said it did “not have confidence” that the R number in England was below one.

The number relates to how many people each infected person is passing the virus on to. Anything above 1.0 means cases are starting to grow again.

But it came as data from the Office for National Statistics suggested the number of people testing positive for coronavirus may be levelling off in England.

In another development, the Department for Transport has announced that emergency funding for bus and tram operators in England is being extended. The money will support services in September when schools are set to fully reopen and brings the total amount spent during the pandemic on the sector to at least £700m.

Where do I have to wear a face covering in England?
public transport
transport hubs, like airports
shops and supermarkets
shopping centres
auction houses
premises providing legal or financial services, like banks or post offices
personal care and beauty premises, like hair salons and tattoo parlours
attractions, like museums and theatres
libraries and public reading rooms
places of worship
funeral service providers
community centres and social clubs
public areas in hotels and hostels
storage and distribution facilities
NHS settings such as hospitals

People should also wear face coverings at any indoor places not listed but where social distancing may be difficult or you will come into contact with people you do not normally meet.

FEELING LOST?: How to start thinking about the future