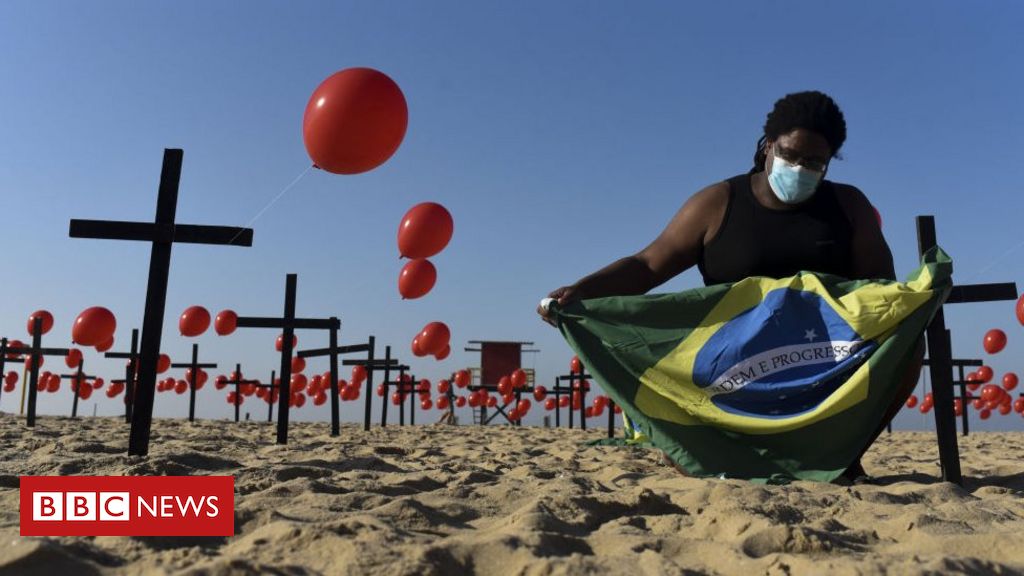 Brazil has recorded more 100,000 deaths linked to Covid-19, the world’s second-highest figure, as the outbreak in the country shows no sign of easing.

The virus killed 50,000 people in three months, but that number doubled in just 50 days. There have been more than three million confirmed cases so far.

The pandemic is yet to peak but shops and restaurants have already reopened.

President Jair Bolsonaro has downplayed the impact of the virus and opposed measures that could hit the economy.

The far-right leader, who caught the disease himself and recovered, fought restrictions imposed by state governors to curb Covid-19, and has frequently joined crowds of supporters, at times without a face mask.

Experts have complained of a lack of a co-ordinated plan by the Bolsonaro government as local authorities now focus on restarting the economy, which is likely to boost the spread of the virus.

The federal government’s response is being led by an army general who has no experience in public health. Two earlier health ministers, both physicians, left the job after disagreeing with the president over social distancing measures and the use of hydroxychloroquine as a treatment, though studies say it is not effective.

President Bolsonaro – who has called Covid-19 a “little flu” and has been criticised at home and abroad for his response to the outbreak – said he recovered from his own infection thanks to the anti-malarial drug.

Brazil has had 100,477 virus-related deaths and 3,012,412 cases, according to the health ministry, though the numbers are believed to be much higher because of insufficient testing. Only the United States has higher figures.

“We should be living in despair, because this is a tragedy like a world war. But Brazil is under collective anaesthesia,” Dr José Davi Urbaez, a senior member of the Infectious Diseases Society, told Reuters news agency.

“The government’s message today is: ‘Catch your coronavirus and if it’s serious, there is intensive care.’ That sums up our policy today.”

There are fears the disease is spreading faster in deprived neighbourhoods and remote areas, such as indigenous communities, where access to adequate health care is difficult.

In a tribute to victims on Saturday, the non-governmental group Rio de Paz placed crosses on the sand on Rio de Janeiro’s famed Copacabana beach and released 1,000 red balloons into the sky.

Senate Speaker Davi Alcolumbre announced four days of mourning in Congress but President Bolsonaro has not yet commented. Earlier this week he said he was sorry for all the deaths but suggested “we should carry on with [our] lives”.

Brazil accounts for nearly half of all coronavirus-related deaths recorded in Latin America and the Caribbean, where more than five million cases have been confirmed, according to Johns Hopkins University, which is tracking the disease globally.

Some of the other hard-hit countries include Mexico – which has the world’s third-highest number of deaths with 52,000 and nearly 476,000 cases – Peru, Colombia and Chile.

Experts say a combination of overcrowded cities, poverty and ill-equipped health systems is contributing to the outbreak in the region.