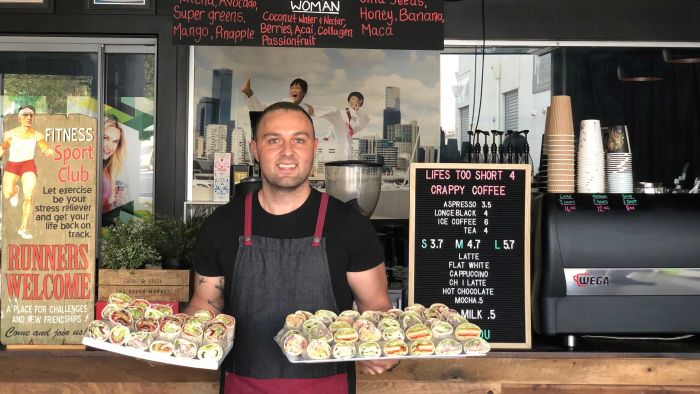 Key points:KPMG estimates that Victoria’s stage 4 restrictions will cost the construction industry $600 millionBuilding contractors say the new rules make it difficult for them to do their workSome businesses which made it through the stage 3 restrictions are now closing their doors

Starting out with a gym, over the years he added a cafe, a beauty spa and a martial arts academy.

With Melbourne back in lockdown and stage 4 restrictions imposed, everything apart from the cafe was forced to shut down.

The cafe had kept operating with takeaway customers only, but last week he decided it wasn’t worthwhile.

“Just five coffees and we officially closed down.”

Mr Pace is planning to start again in Queensland, as soon as he able to do so.

“Now that all four businesses have come to an end, it’s really hit me,” he said.

It is just another hit to Victoria’s economy, which has been pushed into a severe recession as the COVID-19 pandemic forces the state into another lockdown.

“To get through the first shutdown was difficult enough,” Mr Pace said.

“With the second one, I think it’s going to knock out a lot of people, just due to the fact that we’ve been slowly bleeding for four or five months now.”

KPMG chief economist Brendan Rynne thinks the second, tougher shutdown in Victoria could be the end for many businesses.

“Those businesses that have been trading through stage 3, in particular, those that are really struggling to operate, may decide that the step up into stage 4 is just too big a step for them,” he told 7.30.

“Rather than continuing with the pain, they may, in fact, be looking to cease trading as a result.”

Dr Rynne said the new restrictions on the construction industry would be costly to the wider economy.

Under the new restrictions, the number of workers on major construction sites is limited to just a quarter of the previous workforce.

And specialist contractors will only be able to visit three sites a week.

All up, KPMG estimates the restrictions will cost the Victorian economy $600 million.

“Construction is a critical component of the Australian economy,” Dr Rynne said.

“Not only from an economic perspective, in terms of the number of people employed, but also what it produces.

“It produces houses for us to live in, it produces new built environment for us to enjoy.

“So we actually see it as a tangible outcome associated with economic activity.”

And he is warning that the economy will not bounce back quickly.

“Recovery is going to take longer than what our initial impacts were, simply because we know that the longer an economy remains dislocated, the longer it takes to get to come back to where it would normally [be],” he said.

“Where we are now is we’re into this period of a longer dislocation.”

‘I’d rather just work’ Insulation installer Paul Davis worries about telling his staff there is no work.(Supplied: Paul Davis)

Insulator Paul Davis is still trying to figure out how his workers will be able to install insulation at multiple sites under the new restrictions.

He managed to get through the first lockdown, but this time around he is not so sure.

“This last week’s probably only been the week that’s really stressed me out and just had me worried,” Mr Davis said.

“Just not having a clear answer of what’s going on.”

He is worried about his own financial future, but also feeling the pressure to keep his workers employed.

“The guys that are working for me, some have mortgages, some are renting, some are about to have kids,” he said.

“It’s all those things and I never want to tell anyone I’ve got no work for them.

“I don’t want my guys going on JobKeeper.

“I’d rather just work, earn money, pay money and not put another strain on the economy and the Government.

“So, for me, I think construction needs to keep going.”

Don't Miss it Coronavirus US: study shows 97,000 children tested positive in last two weeks of July – live | US news
Up Next Inside the Chinese lab central to the search for the coronavirus’ origin