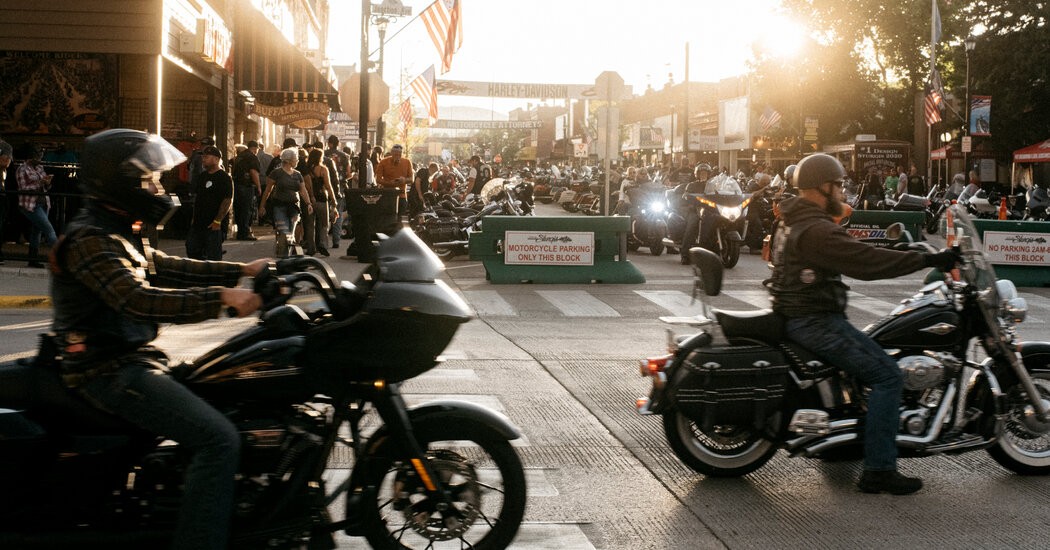 STURGIS, S.D. — Despite the coronavirus pandemic, tens of thousands of motorcycle enthusiasts converged over the weekend outside the small South Dakota community of Sturgis for the 80th annual Sturgis Motorcycle Rally.

The sounds of screeching tires and engines revving echoed across the Sturgis Buffalo Chip, a 600-acre campground that will be home for the next week for the majority of attendees. This year, many said they were not concerned about the virus, as they walked around without masks and took helicopter rides and attended outdoor concerts and motorcycle shows.

Some of the bikers were here for the first time. Others have been attending for decades, and said they were unwilling to miss what they consider an annual tradition.

Officials said about 250,000 enthusiasts were expected this year — about half the number who attended last year, but a figure that would still make the rally one of the country’s largest public gatherings since the first coronavirus cases emerged in the spring. Here are some of the attendees, their thoughts and their rides.

“I come to meet up with old friends, people I haven’t seen in forever and a lot of folks I grew up with.”

“My biggest concern is drivers — they just don’t pay attention to bikes. But I don’t know one person in a six-state radius who has had Covid. I think it is all just political.”

“I go to the rally for one day and ride for three. Between the beer and the women, this place will make you go broke.”

“We have no concerns — if we are going to get sick, then we’ll get sick.”

“I’d always wanted to come to Sturgis. Then it was 2020, and it’s the 80th anniversary, so the numbers worked out for me.”

“You’ve got to be smart. I’ve got masks. When I walk around or ride around, I wear a mask.”

“We are burying our buddy and putting his plaque on Mt. Rushmore. I don’t have a worry in the world.”

“On my trip out here, I had a problem with my bike, so it was a fight to get here. Right now, I’m trying to sit back and relax.”

As for the coronavirus, Mr. Seale said he was not concerned.

“I’m not convinced it’s real. I think it’s nothing more than the flu. If I die from the virus, it was just meant to be.”

“I took my grandma up to be buried with my grandpa in the military cemetery. It was just me and my wife who came out here and did it. We tried to do it a couple of times before and got snowed out.”

“I’ve been coming for four years now. My dad is really into motorcycles and is a really big biker. So when the owner of the Iron Horse Campground got in contact with a friend of mine and asked if I would come out, I did, and have been ever since. I don’t ride out here, but I want to soon. I just need more experience before riding out to Sturgis. I mostly ride with my dad, it’s our thing to do together.”

“I come out every year. This is my first year staying on the Island. I was invited in by my cousin. The people here, we have become extended family.”