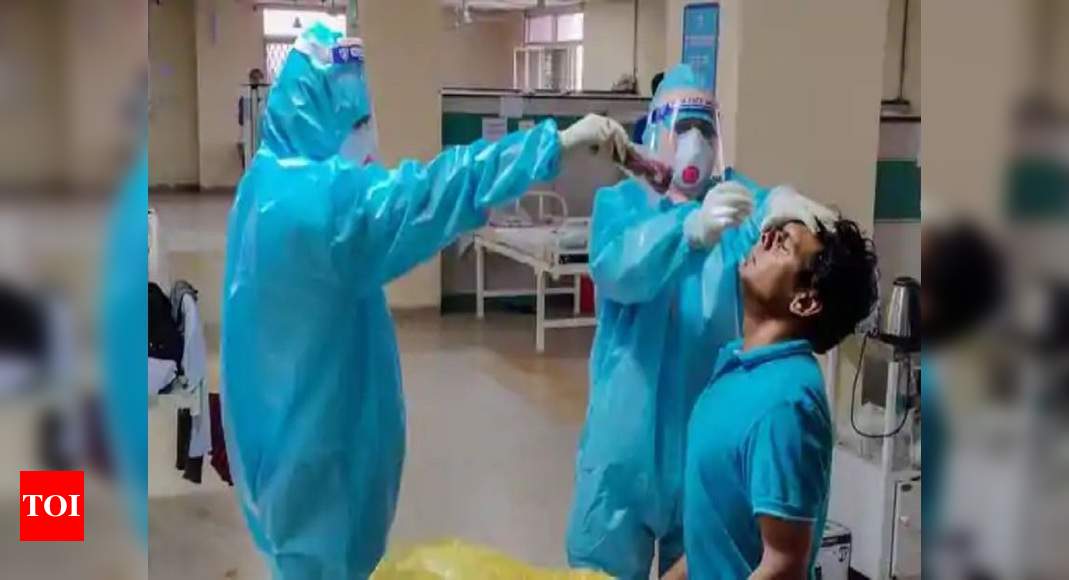 NEW DELHI: It could be early days yet, but there’s a hint of good news amid surging Covid-19 infections in India — the growth in active cases has distinctly slowed in August. In the first 10 days of this month, active coronavirus cases grew by half the number as in the previous 10 days despite a big surge in infections.
The daily case count in the country was back above 60,000 after dipping on Monday. Fresh cases on Tuesday rose to 61,531, taking the total caseload past 23 lakh, as per data from state governments.
Deaths reported on Tuesday were 852, a slight dip from the numbers in the past two days, while total recoveries rose to over 16.3 lakh. Active cases grew by nearly 5,000 to 6,46,927.
While active cases continue to rise in the country, their growth has slowed. From August 1 to 10, active cases grew by 76,572. By contrast, active cases had risen by 1,52,195 in the previous 10 days (July 22-31) despite a lower number of new infections. There were over 5.7 lakh fresh infections in August 1-10 as compared with just over 5 lakh in the previous period. In the 10 days before that (July 12-21), India’s active case had risen by nearly 1.2 lakh.
The slowing growth of active cases is mainly due to the fast rise in recoveries. An epidemic is said to be on the decline when the active cases start to fall in absolute terms. While India is still far away from that stage, a slowing of the growth in active cases is the first step in that direction. It, however, remains to be seen if the declining trend continues.

As fresh cases returned to 60,000-plus levels on Tuesday, at least five states recorded their highest single-day spike in infections. Uttar Pradesh led the way with 5,130 new cases, becoming the fifth state in the country to report cases above 5,000 in a day. The other states with the highest surge in infections were Bihar (4,071 new cases), Assam (2,900, including cases from late Monday night), Rajasthan (1,217) and Haryana (798).
A day after a significant dip in cases, Maharashtra on Tuesday added 11,000 new Covid-19 cases, taking the total caseload to 5,35,601. The state, however, reported a dip in deaths: it added 256, lowest in 14 days. With this, total fatalities in the state are 18,306.
The state has reported over 1.13 lakh cases in 11 days in August, of which 10,940 cases are from Mumbai. The city for the second day in a row reported less than 1,000 cases (917), while recording 48 deaths.
Cases in Bihar surged to a high of 4,071 Covid-19 on Tuesday, taking the total tally to 86,812. This was the first time the state has reported more than 4,000 cases in a day. The state health department also reported 15 Covid-related deaths, which took the toll to 465. Earlier, the maximum 3,992 Covid positive cases were reported in a day on Saturday.
With 6,473 fresh discharges reported on Tuesday, Karnataka crossed the one-lakh mark in recoveries. Active cases now constitute only 42% of the state’s Covid-19 burden. The state reported 6,257 positive cases in the last 24 hours taking the active cases to 79,606. It also reported 86 new deaths. Bengaluru city reported 1,610 fresh cases and 1,508 recoveries and 17 deaths in the past 24 hours.
Andhra Pradesh reported 87 deaths and 9,024 Covid-19 cases on Tuesday, taking the cumulative caseload to 2,44,549. The toll mounted to 2,203, but about 9,100 patients were declared cured on Tuesday, outnumbering the fresh cases for the first time in weeks.