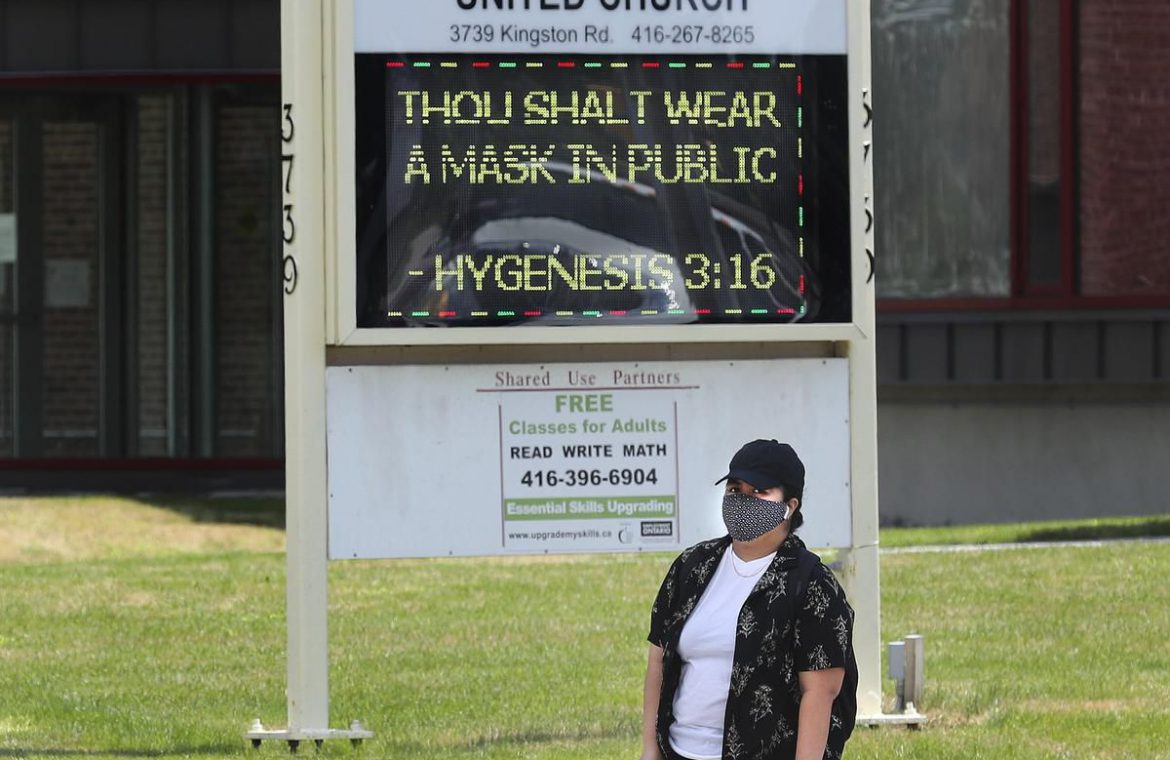 9:05 a.m. Amica at Erin Mills, a private retirement home in Mississauga, has declared an outbreak after a staff member tested positive for COVID-19.

The team member last worked on Aug. 7, and is now recovering at home with pay, Amica Senior Lifestyles said in a statement. Whenever one or more cases occur, Peel Public Health places the health-care institution in outbreak status “as a precautionary measure,” it added.

“We have completed extensive contact mapping and determined that this team member wore the appropriate personal protective equipment (PPE) at all times while in the building and followed all safety protocols, minimizing any risk to our residence,” the statement reads.

8:41 a.m. (updated) Finance Minister Rod Phillips is set to reveal the fiscal toll of the COVID-19 pandemic on the province of Ontario’s books.

Phillips will unveil the first quarterly financial results for the year on Wednesday at 11 a.m.

That will include the early weeks of the outbreak that has killed more than 2,800 Ontarians and cost 1.15 million jobs as most businesses were forced to close due a state of emergency that extended from March 17 until July 24.

On March 25, the treasurer announced a $17-billion coronavirus plan, injecting $3.3 billion more into health care plus $3.7 billion for other supports.

He also pledged an additional $10 billion in tax deferrals, which doubled the projected deficit to $20.5 billion on a record $174.3 billion spending plan. The budget shortfall was $9.2 billion last year.

Read the full story from the Star’s Robert Benzie

7:38 a.m. The Windsor-Essex region has joined the rest of Ontario in Stage 3 of the province’s reopening plan.

The decision means most businesses and public spaces to will be allowed to reopen, but public health guidance on physical distancing and social “bubbles” of 10 people remain in place.

Outbreaks among migrant workers on farms in the region had previously held Windsor-Essex back from Stage 3, which other parts of the province entered throughout last month.

Windsor’s mayor said Tuesday that the city will move forward “cautiously” and ask for additional resources if case counts spike.

Drew Dilkens praised the province for dispatching additional resources to the region to help co-ordinate the local response to the farm outbreaks.

5:45 a.m. Authorities in Brussels are introducing mandatory mask rules across the Belgian capital following a spike in cases.

Brussels Minister-President Rudi Vervoort’s office said Wednesday that the number of new infections in the city had reached Belgium’s red line of 50 per 100,000 inhabitants on average over the last seven days.

A statement says the wearing of masks is from now on obligatory for all people aged 12 and over in all public places and in private places accessible to the public.

Brussels is home to the main European Union institutions and the NATO military alliance and has a population of around 1.2 million people. Mandatory masks are also in place in the port city of Antwerp.

Belgium has one of the highest COVID-19 mortality rates per capita in the world. Around 10,000 people have died in a country with a population of some 11.5 million.

Wednesday 5:38 a.m. The British economy has recorded the deepest coronavirus-related slump among the world’s leading industrial economies after official figures on Wednesday showed it shrinking by a fifth in the second quarter alone.

The 20.4% quarter-on-quarter drop in the April to June period is worse than anything since records began in 1955, the Office for National Statistics said.

Following a 2.2% contraction in the first three months of the year, the U.K. economy is now in recession, commonly defined as two quarters of contraction.

Britain’s recession is deeper than those recorded by comparable economies in Europe, notably Germany, France and Italy, or that of the United States. The other Group of Seven economies, Japan and Canada, have yet to post second-quarter numbers but no economist thinks they will be as bad as the U.K.’s.

Wednesday 4:20 a.m. U.S. Health Secretary Alex Azar says the push to develop a COVID-19 vaccine is “not a race to be first.”

Azar’s comments during a visit to Taiwan on Wednesday follow Russian President Vladimir Putin’s announcement that his country was the first to approve a coronavirus vaccine, prompting doubts about the science and safety behind that purported achievement.

Azar says the U.S. is combining the powers of its government, economy and biopharmaceutical industry to “deliver as quickly as we can for the benefit of the United States’ citizens, but also for the people of the world, safe and effective vaccines.”

He says the U.S. has secured an advanced manufacturing contract for a vaccine being developed by the company Moderna and has supply agreements with five other firms who have vaccines in the works.

He says four of the six companies under contract have reported testing results showing they produce more antibodies for the virus than people who have survived COVID-19, without severe side effects.

Azar says two companies’ vaccine candidates have entered the third phase of trials while the Russian vaccine is just now embarking on that stage with no information having been disclosed.

He says the U.S. process should allow the production of a “gold-standard, safe and effective vaccine” available in the tens of millions of doses by the end of the year.

Tuesday 10:40 p.m. The Australian state of Victoria on Wednesday reported a record 21 virus deaths and 410 new cases from an outbreak in the city of Melbourne that has prompted a strict lockdown.

State Premier Daniel Andrews said 16 of the deaths were linked to aged-care facilities. The number of new cases in Victoria is down from the peak, giving authorities some hope the outbreak is waning.

Tuesday 9:19 p.m. Students in British Columbia won’t head back to classrooms on the originally planned date of Sept. 8 as the provincial government looks to a more gradual return.

Children will be welcomed back to class later in the second week of September after staff reviewed the latest BC Centre for Disease Control guidelines and school operation policies for COVID-19, Education Minister Rob Fleming said Tuesday.

“Having the restart week staged in some kind of manner that would have staff teams together for a couple days before we gradually welcome kids back to make sure that every school — all 1,500 of them in the province — are truly ready to welcome students is a good idea, and that’s the approach that we’ll be taking,” he said.

No official date has been set for children to return to schools.

Tuesday 5:09 p.m. Quebec Premier François Legault says he doesn’t think a potential second wave of COVID-19 will strike as hard as the first one did in Canada’s worst-hit province.

Legault said many of the infections occurred in the early weeks when infected employees brought the virus into long-term-care homes and seniors’ residences while not wearing proper protective equipment.

“I think that if we have a second wave, we will be a lot better prepared,” Legault told reporters in Mascouche, Que., on Tuesday.

And those workers will be wearing masks when meeting with patients, which he said wasn’t always the case early on in the pandemic and contributed to the 5,000 deaths in nursing homes. “I think we’ll be more ready for that,” he said.

4:25 p.m. The Pan American Health Organization has expressed reservations over reports that institutions in the region were negotiating to manufacture and distribute a new COVID-19 vaccine announced by Russia that has yet to go through standard, extensive safety and efficacy trials.

The organization’s deputy director, Jarbas Barbosa, said in an online news conference Tuesday from Washington that any vaccine should be carefully evaluated to ensure the product is safe and effective.

In Brazil, Parana state’s government said it is negotiating with the Russian embassy to participate in the development of a COVID-19 vaccine, and will be holding a technical meeting Wednesday with Russia’s ambassador.

Nicaragua earlier announced plans to produce a Russian vaccine and on Monday, Vice-President Rosario Murillo, wife of President Daniel Ortega, again said the country was in contact with Russian institutions to produce and even export a COVID-19 vaccine.

Barbosa said the vaccine has not yet gone through all the steps needed so that it could be recommended by the World Health Organization or the Pan American Health Organization. He said global health officials were talking with Russian officials to review their data and clinical trials.

“Only after that review, having access in a transparent way to those data and all the information, are we going to take a position,” he said.