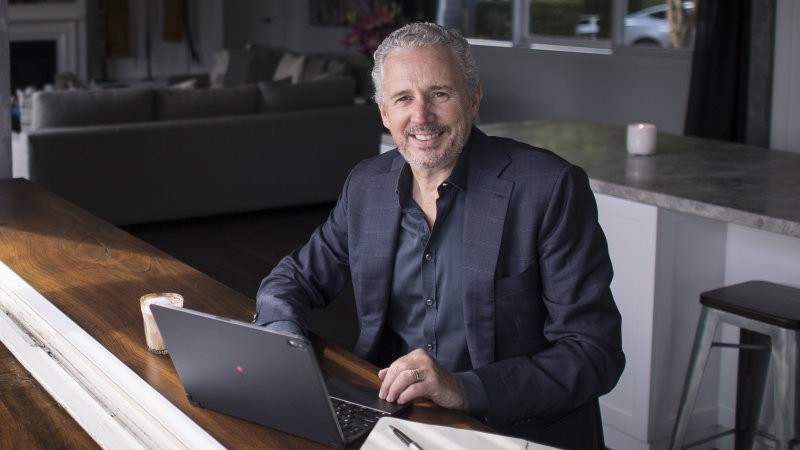 His optimism is despite Telstra announcing a $200 million COVID hit, doubling again this year. Penn is instead selling the transformative potential of a 5G connected and data rich world and Telstra’s ability to leverage exponential growth.

But he argues the NBN pricing model is unsustainable for Australia to take full advantage of that future given marginal returns for retailers and no incentives for investment. He is careful to avoid criticism of NBN, however, focusing on the failure of the federal government to reduce financial demands on a government-owned company.

“The government needs to look at the success of the Australian digitised economy rather than just through the lens of the NBN,” he said.

That argument is obviously self-serving, particularly when Telstra is separating out its own infrastructure arm to give it “optionality” for acquiring NBN should the network eventually be privatised. But that does not make it untrue.

NBN’s mandated need to meet financial targets undermine the ability to meet the nation’s massively increasing need for greater connectivity and data. Announcing NBN’s own results last week, chief executive Stephen Rue made it clear, for example, he plans to soon withdraw the COVID capacity discounts for telcos that allowed them to freely meet extra demand from people working from home.

It’s an example of the virus making even more urgent the hard, fundamental reforms to reboot the Australian economy as well as Canberra’s focus on day-to-day survival of as many businesses as possible.

At the other end of the results spectrum is a company like AMP, which would have endured a year from hell even without COVID-19 – in part due to trends beyond its control, in part due to very home-made errors.

Chief executive Francesco de Ferrari sounded frustrated his attempts to promote his turnaround financial strategy and improved culture of a much battered company have been overshadowed by publicity about sexual harassment involving key executives.

The share market Thursday agreed with him, pushing up the share price more than 11 per cent despite a COVID-19 climate further lowering AMP’s investment returns and transaction volumes while increasing costs, resulting in an underlying profit fall of over 40 per cent to $149 million.

Yet that was only after AMP’s share price had already been savaged recently, in part by awkward revelations about De Ferrari’s personnel choices – particularly damaging in a #MeToo climate. Investors didn’t see how this fitted with the promise to reform a culture eviscerated by the Hayne royal commission.

De Ferrari had appointed his former chief of staff at Credit Suisse, Alex Wade, to the crucial role of chief executive, AMP Australia. But Wade resigned abruptly last week over conduct issues, including allegations of lewd text messages. No further comment from the CEO.

The company has also been embarrassed by internal reaction to Boe Pahari’s appointment as chief executive of company jewel, AMP Capital, after The Australian Financial Review revealed Pahari had been penalised $500,000 following the settlement of a sexual harassment claim.

It’s a spectacular example of how no Australian business should diverge too far from global perceptions of altered corporate behavioural standards. Call it 2020 hindsight.

In the west another corporate icon, Woodside Petroleum, is fighting other global trends that have destroyed CEO Peter Coleman’s hopes of imminent investment decisions on massive LNG projects at Browse and Scarborough.

Dramatic falls in demand and in oil and natural gas prices have made such investment calls untenable for now – just when there is increasing global debate about future demand due to environmental concerns and the push for carbon taxes.

Most major gas companies maintain the industry has strong prospects, especially in Asia, but Woodside booked an eye watering net loss of $US4.067 billion ($A5.68 billion) for the six months to June, largely due to impairments devaluing assets. These had been flagged, so Woodside’s share price fell less than 2 per cent on Thursday.

According to Coleman, external conditions are the worst he has seen. Still, he insists the company is well positioned to take advantage of opportunities and sees “some light at the end of the tunnel”.

Let’s hope it’s not the headlights from the next oncoming COVID-19 train bearing down on everyone.