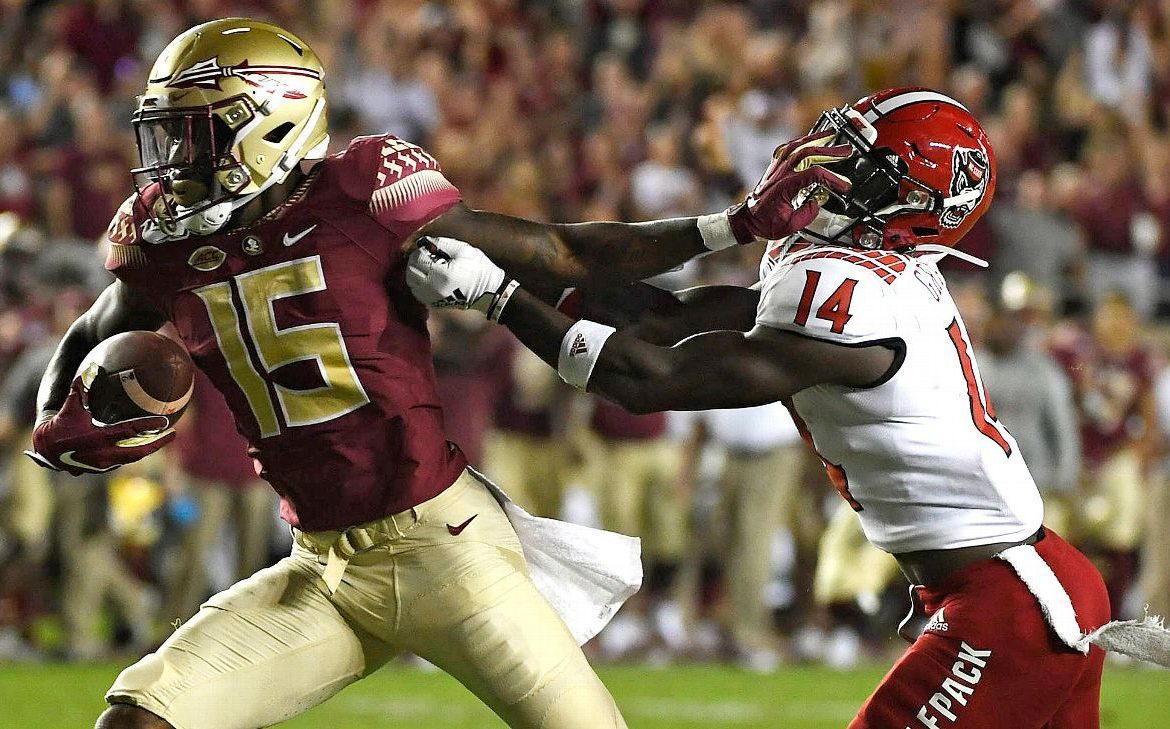 The delicate balance of player safety and pushing forward with football might have hit a tipping point at Florida State, where three wide receivers, including star Tamorrion Terry, have publicly spoken out about a lack of transparency in coronavirus testing at the school.

On Wednesday night, D.J. Matthews tweeted that he had tested positive for COVID-19, but the tweet was quickly deleted. He followed Thursday morning with a second tweet suggesting lies within the program.

Terry retweeted Matthews and offered his own vague concerns, writing, “I can’t believe this.”

Warren Thompson offered some clarity in an open letter to Florida State, saying he had been lied to about testing and health protocols on multiple occasions.

“Our leadership is based off an ‘I’ mentality with them only worried about their own future rather than their own athletes,” Thompson wrote. “I have been ridiculed about speaking up regarding this issue, and it needs to be addressed for myself to safely continue the season.”

The players’ tweets came while the rest of the team was practicing Thursday morning.

After practice, coach Mike Norvell criticized the public commentary, repeatedly calling it “disappointing” and saying that, while he had not read the language specifically, he had been told some content was untrue. Norvell said he did not learn of the tweets until he left practice.

“We’re working through the policies and procedures that are in place for us,” Norvell said, “but I’ve been very transparent with every player I’ve talked to.”

Florida State has refused to release testing numbers since players returned to campus in June. While many larger schools, including Clemson, Michigan and Oklahoma, have offered aggregate testing numbers, FSU has not announced any data.

According to one source close to the situation, the concerns reached a boiling point on Tuesday, when Florida State athletic director David Coburn said during a roundtable discussion with Florida Gov. Ron DeSantis that the school was doing weekly testing. In fact, the school has not tested that often throughout the summer, and the testing results largely have been kept private — even from players. Neither Norvell nor Coburn immediately corrected the information.

Additional concerns were raised when Matthews tested positive for COVID-19 on Wednesday. Players believed Matthews had felt sick prior to testing but was still able to participate in position meetings, which led to quarantines for others.

Thompson’s words were echoed by Terry’s mother, Cindy Rewis, who tweeted, “We need answers and we want the truth.”

Rewis specifically called for Norvell to address concerns raised by parents and players. She said that weekly testing has not taken place and that players who have tested positive have been told to remain silent.

Norvell said he spoke with Thompson, Terry and Matthews on Wednesday night, including about coronavirus testing and contact tracing protocols. Norvell said he did not ask Matthews to delete his initial tweet and said players are free to post anything they want on social media.

A few players spoke out on behalf of Florida State’s efforts. Starting safety Jaiden Lars-Woodbey tweeted that “the FSU Athletic training staff has been doing everything in their power to keep us SAFE!”

Said defensive end Joshua Kaindoh: “I feel safe, and if I didn’t, just like everybody, I have the choice to be here or not be here.”

This is the second public backlash against Norvell before he has even coached a game for the school. In June, star defensive tackle Marvin Wilson threatened a player boycott and stated publicly that Norvell had misrepresented meetings between coaches and players after George Floyd was killed while in police custody.

Norvell met with the team the next day to clear the air and said the situation was largely a misunderstanding, thanking Wilson for bringing the matter to light.

“There’s a transition any time there’s a new staff at a program,” Norvell said Thursday. “The issue back in May with Marvin, I was able to come out and understand where my mistake was made. … I owned that. We came together as a team.

“Players have a right to post whatever they want to post. Everybody has a platform they can use. I support our players and their voice. … The integrity of how we operate, I stand by it every day.”

Wilson tweeted Thursday that he felt “safe with what @FSUFootball is doing for us through this pandemic.”

Norvell said he was not aware whether Terry, Thompson or Matthews would opt out after Thursday’s social media posts, saying repeatedly that all players are free to do so if they have health concerns.

“This is completely voluntary,” Norvell said. “We have a bunch of guys on this team that have worked extremely hard for the opportunity [to play].”

Don't Miss it COVID-19 has moved the future to now
Up Next "They had things wrong from the beginning": America's mounting coronavirus toll