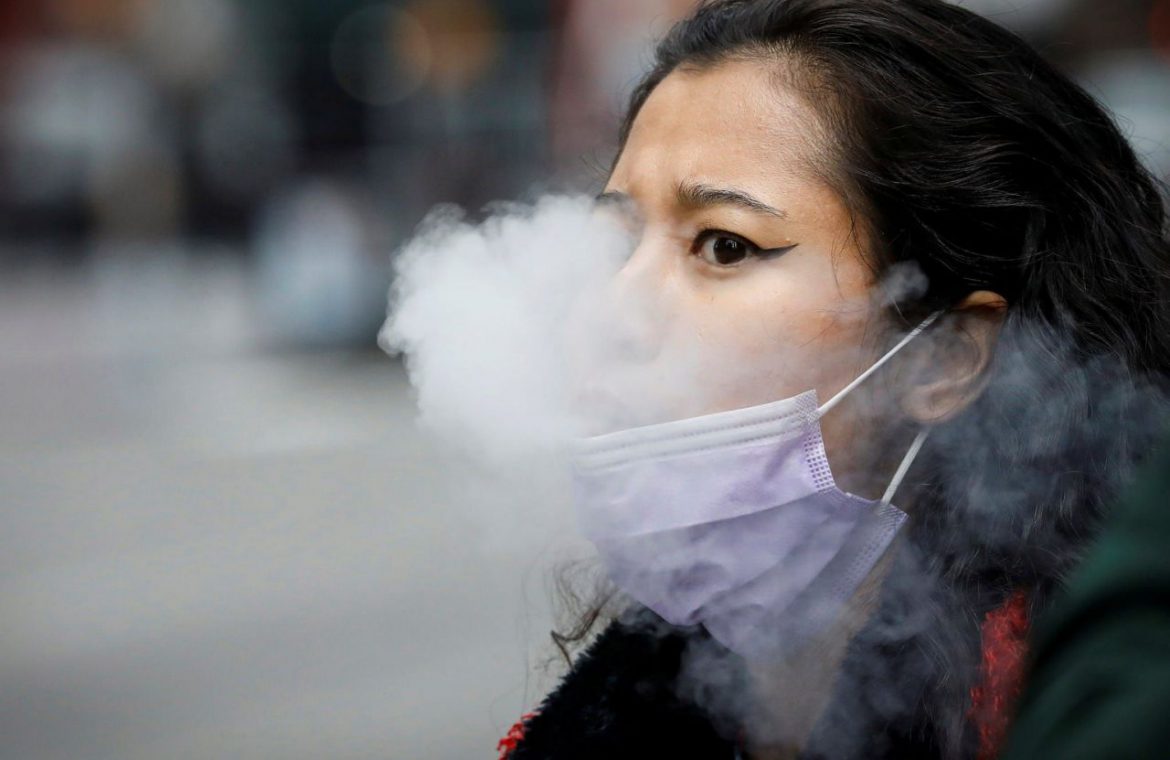 Young people may be less likely to get severe COVID-19 cases, but health experts have long warned that vaping can make them more vulnerable.

Now scientists have data to back that up.

New evidence from researchers at the Stanford University School of Medicine found that teenagers and young adults who vaped were five to seven times more likely to test positive for COVID-19 than their non-vaping peers.

A healthcare worker vaping while taking a break outside Maimonides Medical Center in Brooklyn, New York, on April 7.

The study, published Tuesday in the Journal of Adolescent Health, relied on survey results from 4,351 people ages 13 to 24 across the US. It’s the first to examine the link between vaping and coronavirus vulnerability.

“Teens and young adults need to know that if you use e-cigarettes, you are likely at immediate risk of COVID-19 because you are damaging your lungs,” Bonnie Halpern-Felsher, a professor of pediatrics at Stanford who was a coauthor of the study, said in a press release.

E-cigarettes and marijuana vapes have skyrocketed in popularity in recent years, especially among college students and high schoolers. In 2018, 16% of college students said they vaped nicotine, compared with just 6% the year before, according to Pew Research Center. For 12th graders, the share rose to 25% from 11%, and among 10th graders it jumped to 20% from 8%.

As the US has reopened after its spring lockdowns, many officials have blamed young adults who congregate at bars, parties, and spring-break beaches for the alarming surge in coronavirus cases.

“Young people may believe their age protects them from contracting the virus or that they will not experience symptoms of COVID-19, but the data show this isn’t true among those who vape,” Shivani Mathur Gaiha, the study’s lead author, said in the press release. “This study tells us pretty clearly that youth who are using vapes or are dual-using [e-cigarettes and cigarettes] are at elevated risk, and it’s not just a small increase in risk — it’s a big one.”

People who both vaped and smoked cigarettes were 7 times more likely to have COVID-19A woman in New York City on March 31.

Though older people are more likely to develop severe coronavirus symptoms like pneumonia and shortness of breath, young people began to fill hospitals as the US reopened.

Young patients’ cases didn’t necessarily resolve quickly either: A report from the Centers for Disease Control and Prevention published in late July found that nearly 20% of young, previously healthy coronavirus patients hadn’t recovered after two to three weeks of illness.

The Stanford researchers behind the new study set out to investigate vaping’s potential as a risk factor among these young, otherwise healthy people.

“We were surprised,” Halpern-Felsher told NBC News. “We expected to maybe see some relationship … but certainly not at the odds ratios and the significance that we’re seeing it here.”

There are several possible explanations for the results. Halpern-Felsher said the way people used their vapes — sharing with others, touching their mouths or the device’s mouthpiece, and removing masks to smoke — could contribute to the virus’ spread. It’s also possible the aerosols people inhale from e-cigarettes could carry the virus.

But many researchers suspect that there is a direct link between vaping, lung damage, and vulnerability to the coronavirus.

Regular vaping can leave the lungs damaged and vulnerableVaping devices on display at a store in New York on January 2.

Research from the University of California at San Francisco indicates that one in three young adults ages 18 to 25 are vulnerable to severe COVID-19 infection. To be considered vulnerable, a person had to have at least one risk factor identified by the CDC — either a chronic illness (like heart disease, diabetes, or asthma) or one key lifestyle factor: smoking.

Smoking was by far the most prevalent risk factor for young people, the UCSF study found. That includes use of tobacco, e-cigarettes, and cigars. The researchers grouped those habits together because, much like smoking tobacco cigarettes, research has shown that vaping can damage the lungs.

Because the coronavirus attacks the lungs, any vulnerability in that system can leave a person susceptible to worse outcomes. It can also mean that a smaller amount of the virus is required to infect the system. That seems to make vaping a risk factor much like smoking.

Experts figured that would be the case even before they had the data to show it.

“From my standpoint, meshing [together] all of the variables that put in things that are not air into your lungs, I would view them all kind of in the same category,” Dr. Panagis Galiatsatos, a pulmonologist and national representative for the American Lung Association, previously told Insider.

He added: “If you get the infection and you have good, healthy lungs that aren’t being combated every day by toxins, whether it’s from inhaled marijuana or inhaled combustible cigarettes or inhaled electronic cigarettes, you’re allowing your lungs to be at the best capacity they can to try and fight off this infection.”

Don't Miss it For those experiencing homelessness, lives already hanging by a thread ‘snapped’ by COVID-19, say advocates
Up Next How to make coronavirus skeptics believe what they can't see | COVID-19 Special

In Pennsylvania, if you’re having friends over to socialize, you’re supposed to wear a mask — and so are your…