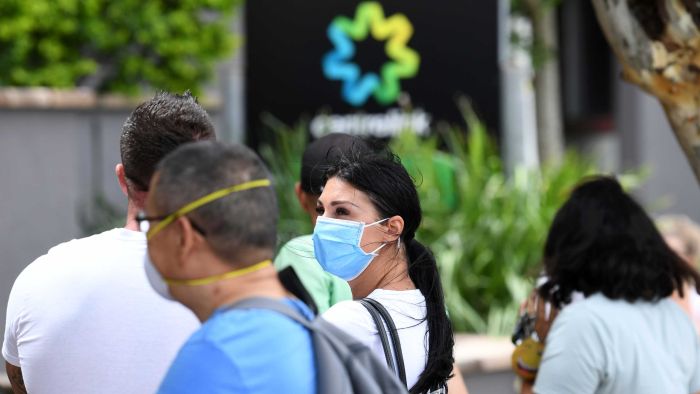 Australia’s unemployment rate has edged up to 7.5 per cent, with almost 115,000 jobs created in July.

Key points:Unemployment was expected to jump from 7.4 to 7.8 per cent, but only rose to 7.5 per centHours worked rose by 1.3 per cent as 43,500 full-time jobs were added and 71,200 part-time jobsUnderemployment dropped by half a percentage point, even as participation in the labour market rose

The Bureau of Statistics data now estimates that more than a million Australians were unemployed in early July, up by nearly 16,000 from the previous month.

That pushed the official unemployment rate up from 7.4 to 7.5 per cent, which is the highest level this century.

However, there was overwhelmingly good news in the ABS figures, with the rise in unemployment being driven by more people looking for work.

The participation rate jumped by 0.6 percentage points to 64.7 per cent and is now approaching something like normal levels, which have ranged between 65-66 per cent over recent years.

The participation rate would have been boosted by the reintroduction of some limited mutual-obligation requirements in early June, pushing more people on JobSeeker into looking for work to retain their benefits.

It is likely to receive another boost this month as more requirements were re-introduced on August 4 to everywhere except Victoria.

The creation of an estimated 114,700 additional jobs was also almost three times better than the 40,000 expected by most economists.

Most of those analysts had been expecting unemployment to jump to 7.8 per cent as more people re-entered the workforce following the end of lockdowns across most of Australia.

Australia’s unemployment rate is at its highest level this century.(ABC News: Stephen Letts/ABS/Refinitiv)

There was also good news on hours worked, which rose 1.3 per cent during the month, as 43,500 of the new jobs were full-time positions.

Why unemployment is worse than it seems

For years, rising underemployment has meant the unemployment rate is only part of the jobs picture. Amid the COVID-19 shutdown and stimulus that has become more true than ever.

This also helped to reduce underemployment, which dropped 0.5 percentage points, but still remains at a high level of 11.2 per cent.

Combining that figure with the unemployment rate reveals that 18.7 per cent of Australians aged over 15 who want to work either cannot find a job or cannot get as many hours as they want.

These ABS figures capture people’s working situation for the fortnight of June 28 to July 11, and so does not capture most of Melbourne’s stage 3 lockdown, and does not reflect the massive loss of work under the current stage 4 restrictions introduced on August 2.