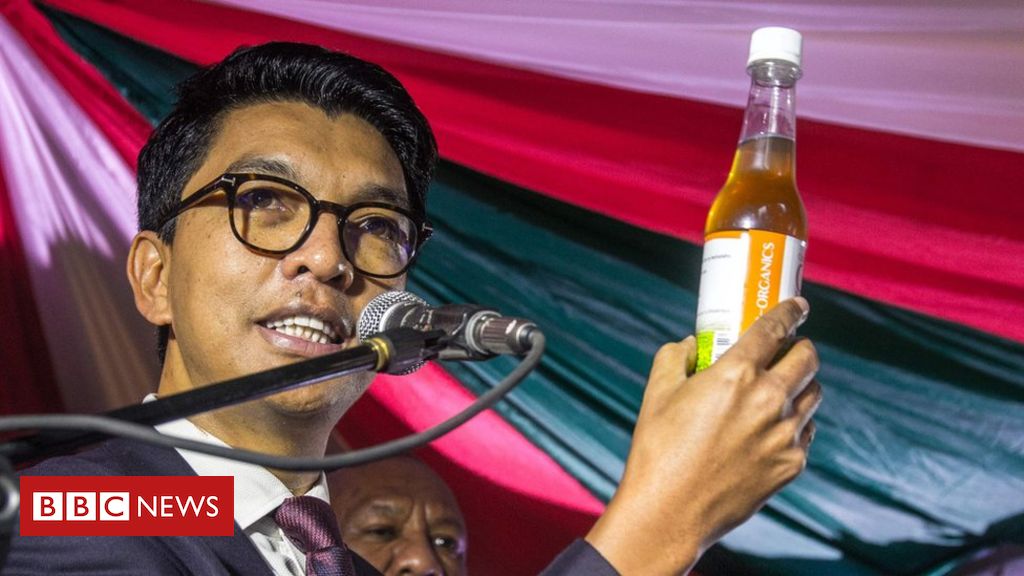 The president is upbeat about his strategy to beat coronavirus

Hospitals in Madagascar have been struggling to cope with a surge of Covid-19 cases, while the president has been promoting an unproven product he says can cure the disease despite the World Health Organization (WHO) warning against using untested remedies.

Cases have quadrupled in the past month in the Indian Ocean island, with more than 13,000 infections and 162 deaths from coronavirus, which has spread to all but one of its 22 regions.

Despite the spike, President Andry Rajoelina stands by the herbal concoction called Covid-Organics, which was launched to great fanfare in April.

It is produced by the Malagasy Institute of Applied Research from the artemisia plant – the source of an ingredient used in a malaria treatment – and other Malagasy plants.

The drink has been marketed as a prevention and remedy – and for the last four months been offered to children at school.

Earlier in the month the president was out again distributing the tonic, along with essentials such as rice, oil, sugar, to poor communities in the capital, Antananarivo.

He faced criticism for drawing crowds during a lockdown, but his attitude remained upbeat: “The epidemic won’t last, it’s only passing through and we will defeat it.”

He also suggested that the number of infected people was not high in suburbs of the capital where the free distribution of the drink had started a few months ago.

The WHO says it welcomes innovations based on traditional remedies but it wants scientific evidence before backing their use.

So far no results of clinical trials have been made public – though that has not stopped stop the tonic from becoming a source of African pride for some. Free shipments have been sent to dozens of African countries.

Media captionFake news and mistrust in the government mean a lot of Nigeria’s population thinks the pandemic is a hoax.

How close are we to finding a treatment?
Debunking fake coronavirus stories in Africa

The government has sought to counter growing scepticism about it at home and abroad.

“Just because we have condoms, does that mean we shouldn’t be careful about Aids or that Aids is over? It’s the same thing,” says the president’s communications director Rinah Rakotomanga.

“The majority of people who used the product and don’t have a chronic illness recovered completely, we are proud to have this remedy against the disease. It’s in our culture as Malagasy people to use decoctions like this… as long as it’s working, we don’t need clinical trials.”

However, most people with coronavirus will start to recover quickly after a few days’ rest. It is chiefly – though not exclusively – those with underlying health conditions that are most at risk of developing severe symptoms.

Soldiers distributed masks and some Covid-Organic products in April

But the health ministry has been much more cautious in its approach – advising hospitals that Covid-Organics only be administered to patients with mild symptoms who do not have other illnesses such as diabetes.

Consent from those being treated is also needed, its advice protocol says.

Despite the president’s optimism, coronavirus deaths are reported daily.

Last month, Health Minister Ahmad Ahmad appealed for international help to get equipment as he expressed his concern about the rapidly filling hospitals – for which he was rebuked by the presidency.

The defence ministry then issued a call to find volunteer doctors and nurses to support the staff at a treatment centre set up at the Mahamasina Stadium in Antananarivo.

It was opened at the beginning of August and dozens of patients have already been received.

One of the hospitals struggling to cope with the influx of patients is Antananarivo’s University Health Centre of Andohatapenaka – it only takes serious coronavirus cases, especially those patients who are also suffering from other conditions.

According to hospital director Raveloson Nasolotsiry, there are between 50 and 56 beds constantly occupied.

As soon as patients start getting better, they are transferred to other treatment centres to make space for new arrivals.

He expects severe cases to keeping arriving as it is winter in the central highlands.

“Patients with a serious form of the disease are already vulnerable and sensitive to seasonal variations,” he said.

They might also mistake their symptoms for flu and not see a doctor right away to check if they are infected with Covid-19, he warns.

Heath workers on the frontline also feel vulnerable, including those at the country’s main hospital.

I treated him [a Covid-19 patient] without proper protective gear. I only had a cloth mask that I brought from home”

“We have been completely exposed,” Sitraka Randrianasolo, a 27-year-old intern at the Joseph Ravoahangy Andrianavalona Hospital in the capital, where several medics have tested positive for Covid-19 in recent weeks.

“There was a patient who came to the emergency service and died 24 hours later. Turns out he had Covid-19.

“I treated him without proper protective gear. I only had a cloth mask that I brought from home. I took the test later, and thankfully I wasn’t infected.”

Farmers in Madagascar grow artemisia, used in some malaria treatments

He says the issue has since improved after a private company donated protective masks and gloves to the facility.

The government has been trying to send equipment to hospitals in different regions.

But for Jerisoa Ralibera, president of the paramedics’ union SISFM, the government’s efforts are too little, too late.

“The state is doing better now regarding protective equipment but it’s not enough to stem the epidemic, health workers keep using the same protective gear meant for single use only, especially gowns and suits, and there aren’t enough drugs,” he said.

According to SISFM, dozens of health staff have been infected with Covid-19.

These fears have not been eased by the government’s lifting of a five-week lockdown in the region of Analamanga, where the capital is located.

President Rajoelina said in a televised speech that it was economically unbearable for the Malagasy people to continue with the restrictions.

He said a “stabilisation phase” had been reached and in the last two days new cases have been lower in the capital.

But the Analamanga region remains the epicentre of the epidemic – and the disease is continuing to spread in other regions of the island.