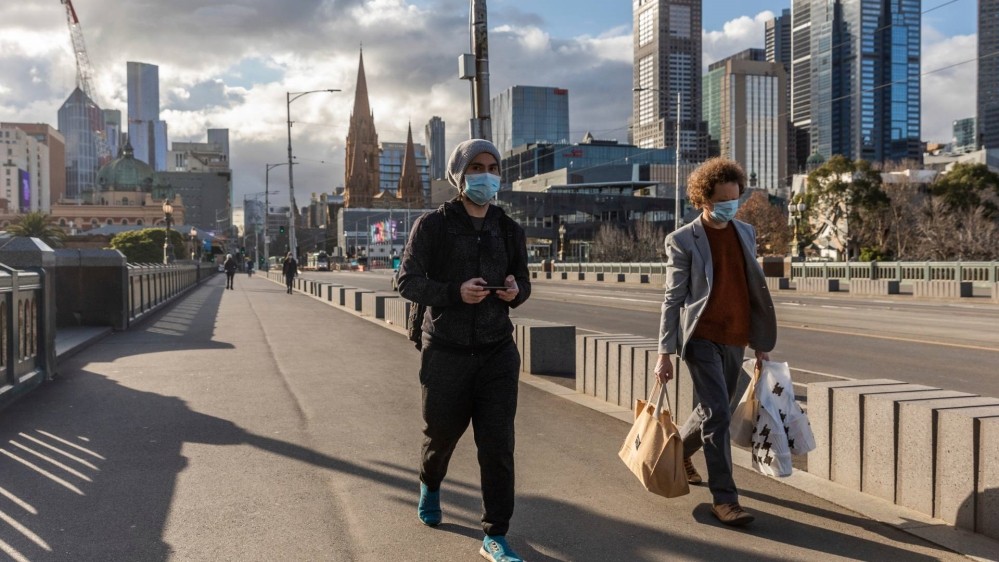 Australia has reported the deadliest day of the pandemic with 25 fatalities from the coronavirus in the last 24 hours and 282 new cases in the state of Victoria, according to the government on Monday.


New Zealand’s Prime Minister Jacinda Ardern on Monday postponed the general election by four weeks to October 17 but ruled out delaying it any further, as the country tackles a new outbreak of the coronavirus.


The United States has surpassed 170,000 coronavirus deaths, according to the latest Johns Hopkins University tally, as health officials express concerns about COVID-19 complicating the fall flu season. More than 5.4 million people in the US have been infected, while 1.8 million have recovered.

Lebanon has registered a record daily number of coronavirus infections, with 439 people contracting the virus and six fatalities, bringing the total to 8,881 cases and 103 deaths.


Worldwide coronavirus cases surpassed 21.59 million, according to Johns Hopkins University, while more than 13.59 million people have recovered. At least 773,000 people have died.

Bolivia has surpassed 100,000 coronavirus cases, the country’s Ministry of Health reported, predicting that the virus would reach its peak there in September, according to Reuters news agency.

Bolivia’s confirmed coronavirus infections reached 100,344, the ministry said, and there have been 4,058 deaths since the virus first emerged in the country in early March.

“Cases are climbing steadily, at least in the western side of the country. By the end of the month, we will reach … 130,000 to 150,000,” Rene Sahonero, the ministry’s director general of hospitals, told state television.

Sahonero said cases had accelerated among Bolivia’s population of 11.6 million after recent protests linked to the postponement of general elections.

The Electoral Court decided in July to postpone the vote until October 18 due to the spread of the coronavirus.

Michelle Bolsonaro, the first lady of Brazil, has said that her latest COVID-19 test result is negative, more than two weeks after she announced that she tested positive of the disease.

“Negative exam. Thanks for the prayers and for all the expressions of affection,” 38-year-old Michelle, the wife of President Jair Bolsonaro, said on Instagram. She published an image of what she said was her laboratory exam. “Undetected,” it read.

Bolsonaro’s youngest son from his second wife, 22-year-old Jair Renan, has also tested positive for the virus. On Saturday, he released a video in which he takes pills that he says are hydroxychloroquine. The drug has no proven efficacy against the new coronavirus but has been widely publicised by the Brazilian president as a treatment for COVID-19.

President Bolsonaro had said he tested positive for the coronavirus on July 7, suffered mild symptoms and was free of the virus in late July. He has downplayed the devastating impact of COVID-19, often appearing in public without a mask and meeting supporters in close proximity despite social distancing recommendations.

Brazil has recorded more than 3.3 million coronavirus cases and more than 107,000 deaths, second only to the United States.

South Korea reported 197 new cases of the coronavirus on Monday as it battles sporadic outbreaks in densely populated Seoul and its neighbouring area, according to Yonhap news agency.

The additional COVID-19 cases raised the country’s total caseload to 15,515, according to the Korea Centers for Disease Control and Prevention (KCDC). Of the new cases, 188 were local transmissions.

The country reported no additional fatalities, keeping the death toll at 305. The fatality rate was 1.99 percent.

Seven more people have been released after recovering from the disease, bringing the total to 13,917.

Mexico’s health ministry has reported 4,448 new confirmed cases of coronavirus infections and 214 additional fatalities, bringing the total in the country to 522,162 cases and 56,757 deaths as of the end of Sunday, according to Reuters news agency.

Members of the Star Wars fan club deliver food and sodas to relatives of patients hospitalised in Merida, state of Yucatan, amid the coronavirus pandemic [Hugo Borges/AFP]

All of the new infections were imported cases, the agency said in a statement. There were no new deaths.

As of August 16, mainland China had a total of 84,849 confirmed coronavirus cases, it said. China’s death toll from the coronavirus remained unchanged at 4,634.

“She was like my mother,” wrote Morales on social media. He was forced to resign last year after an election marred by irregularities.

Morales, who is in Argentina, faces sedition and other charges if he returns to Bolivia. He blamed “racism and political persecution” for preventing him from visiting his sister in a hospital in Oruro, southeast of La Paz.

In the last two weeks, supporters of Morales’ party set up nationwide blockades to protest the recent postponement of elections as Bolivia struggles with the coronavirus pandemic.

Australia has reported the deadliest day of the pandemic with 25 fatalities from the coronavirus in the last 24 hours and 282 new cases in the state of Victoria, according to the government.

The previous record for Australia was 21 deaths in one day.

Mexican President Andres Manuel Lopez Obrador has announced that a COVID-19 vaccine could be available in the country and throughout Latin America by the first quarter of 2021.

In a video posted on social media on Sunday, Obrador said Mexico has reached a deal with Argentina’s AstraZeneca pharmaceutical company to produce a vaccine for distribution throughout Latin America.

Mexico has recorded more than 517,000 coronavirus cases and more than 56,500 deaths – the third-highest in the world next to the US and Brazil.

Lebanon has registered a record daily number of coronavirus infections, with 439 people contracting the virus and six fatalities.

The new infections bring to 8,881 the total number of people reported infected in the small country of just more than five million. Some 103 have died because of COVID-19.

The latest development comes as the country continues to grapple with the aftermath of the Beirut explosion that killed more than 200 people and injured about 6,000 others.

Lebanon’s health sector has been challenged by the pandemic that hit amid a deepening economic crisis. The blast that hit in Beirut’s centre knocked out at least three hospitals in the capital and greatly increased pressure on those still operating.

For all the key developments from yesterday, August 16, go here.

India’s Covid tally stands at 91,77,840. (File) New Delhi: There are two ways to fudge the actual number of Covid…