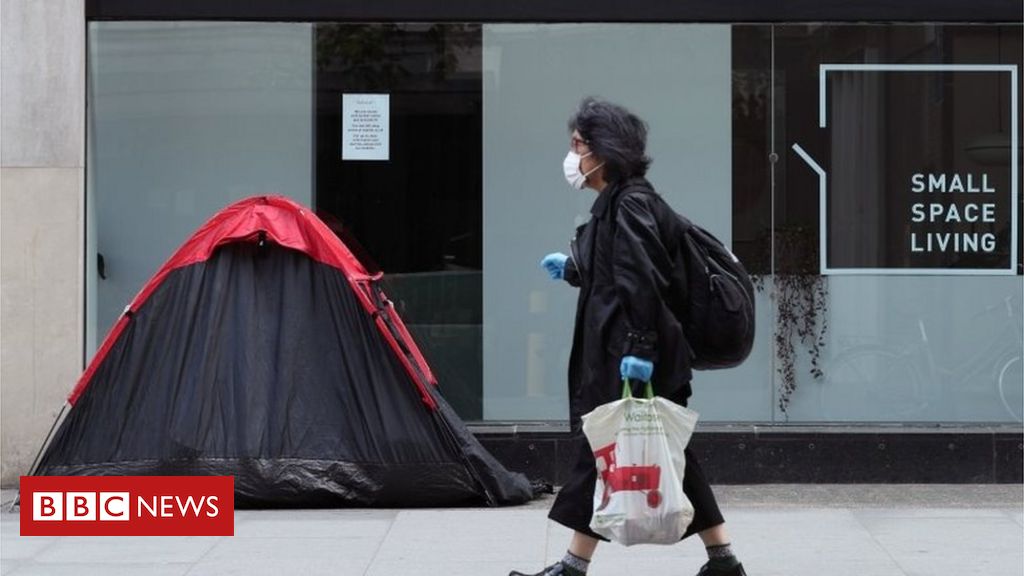 England could see “a new wave of homelessness” when a ban on evictions ends later this month, MPs have warned.

The ban was introduced in March as part of emergency legislation to protect those hit financially by the pandemic.

Amid fears that evictions may lead to more homeless, 21 MPs have urged the government to guarantee council funds to house rough sleepers for a year.

The government said it would “continue to provide appropriate support” to those affected.

New evictions in England and Wales had initially been suspended until 25 June, but the pause was extended to 23 August.

The Labour-led Welsh government has doubled the notice period required for evictions issued on or after 24 July to six months, excluding cases relating to anti-social behaviour.

The Scottish government has proposed extending its ban on evicting renters until March 2021.

With the 23 August deadline now approaching , MPs have urged the government to do more to protect the homeless and those at risk of becoming homeless in England “given the ongoing threat of coronavirus and the risk of a potential second wave”.

In a letter to rough sleeping minister Luke Hall, the MPs called on him to guarantee all local authorities in England can fund accommodation for the homeless “for at least a year” .

“Some local authorities are in the process of confirming and funding accommodation for rough sleepers for another year, however it is so important that all councils are able to provide this.

“We cannot put a cut-off on showing all those in need compassion at this time,” the letter said.

The MPs also urged the minister to scrap the Vagrancy Act – which still stands in England and Wales, having been repealed in Scotland. The Act allows police to arrest and fine people caught begging in public.

It was signed by nine Labour MPs, one DUP MP and 10 Lib Dem MPs, including the two party leadership candidates Sir Ed Davey and Layla Moran.

There are an estimated 8.7m renters in England.

In March, as the lockdown began, councils were told to move homeless people off the streets and out of communal shelters.

The government says about 14,500 people were found emergency accommodation across England.

In England, ministers have said allowing eviction hearings to resume is an important step towards protecting landlords’ rights.

The government has said new repossession rules in England will provide appropriate protection for renters after eviction court hearings resume.

Labour has branded the new rules “toothless” and called for emergency legislation to strengthen protection for renters.

Paddy says his life “spiralled out of control” and he ended up sleeping rough following eviction by his landlord.

He had lost his job in a timber yard at the start of the pandemic, and was unable to find work to replace it.

Unaware of the ban on new evictions, he says he told his landlord he had nowhere to go but his landlord told him that was “not my problem”.

“I remember walking down the stairs and through the gate, thinking ‘where am I going to go?'” he says.

He is now back in a home and retraining to be a lorry driver, but says sleeping on the streets was the “worst experience of my life”.

“The way it came, a hundred miles an hour is how I would explain it,” he told BBC Radio 4’s Ross Hawkins.

“I went from the top to the bottom in a matter of days”.

Former shadow chancellor John McDonnell has gone further, and called for the evictions ban in England and Wales to be extended for at least another year.

He told the Mirror it would be “premature” to end the ban this month “with so many jobs being lost and incomes drying up”.

“The ban on evictions must be extended for as long as the risk of Covid persists,” he added.

The National Residential Landlords Association has, however, called on ministers to resist calls for another extension of the evictions ban in England and Wales.

The UK-wide body says its research indicates the vast majority of tenants are either paying rent or have made an arrangements with their landlord to avoid arrears.

A Ministry of Housing, Communities, and Local Government spokesperson said it had taken “unprecedented action to support the most vulnerable people in our society during the pandemic”.

“Nearly 15,000 rough sleepers have been housed in emergency accommodation since the beginning of the pandemic,” they added.

“We’ve also ensured no tenants have been evicted at the height of Covid.

They added that new repossession rules in England for after eviction hearings restart will require landlords to provide more information about their tenants’ situation when seeking an eviction.

Judges will be able to “adjourn a case if this information isn’t provided,” they added.

Evictions: What are my rights?

Landlords in England and Wales can evict their tenants without giving a reason by issuing a Section 21 notice.

Normally, this can only be done when the initial fixed term has ended.

This notice might be ruled invalid if the landlord has failed to stick to certain rules, for instance by failing to properly protect a tenant’s deposit.

The normal notice period for this type of eviction is two months, but this has been extended to three months because of the Covid-19 crisis.

To evict a tenant who has fallen behind on rent, landlords must issue a Section 8 notice. If the tenant does not leave by the specified date, landlords can then apply to a court to enforce it.

The government has put new rules in place for when new repossession proceedings are allowed to start again after 23 August.

Under the new rules, landlords will have to say how the pandemic has affected their tenants financially when applying for a hearing.

They will also be required to produce a tenant’s full rent arrears history in advance of proceedings, rather than at the hearing itself.

In Wales, an £8m loan scheme is being set up for private tenants not on benefits who have build up rent arrears during the pandemic.

ALHAN’S WORLD: Health tips to keep you in good shape in these socially distanced times

WAKE UP TO MONEY: Bracing for the Covid recession

Are you worried about being evicted when the ban is lifted? Or are you a landlord? Share your views and experiences by emailing haveyoursay@bbc.co.uk

In some cases your comments will be published, displaying your name, age and location as you provide it, unless you state otherwise. Your contact details will never be published. Please ensure you have read our terms & conditions and privacy policy.

Or use the form below:

If you are reading this page and can’t see the form you will need to visit the mobile version of the BBC website to submit your question or send them via email to YourQuestions@bbc.co.uk. Please include your name, age and location with any question you send in.

If you are happy to be contacted by a BBC journalist please leave a telephone number that we can contact you on. In some cases a selection of your comments will be published, displaying your name as you provide it and location, unless you state otherwise. Your contact details will never be published. When sending us pictures, video or eyewitness accounts at no time should you endanger yourself or others, take any unnecessary risks or infringe any laws. Please ensure you have read the terms and conditions.