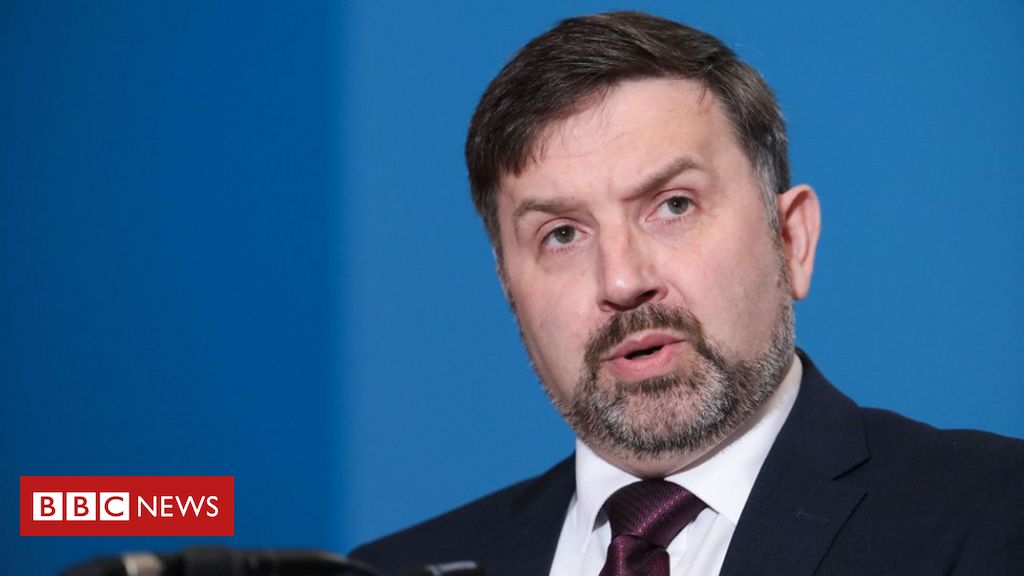 Health Minister Robin Swann said “we have to step in now”

Northern Ireland’s health minister has said he will be recommending Covid-19 restrictions to the executive to curb the increasing spread of the disease.

Robin Swann said “we have to step in now” to deal with a rise in new cases.

He said he would be making a number of recommendations when Stormont ministers meet on Thursday on how to help arrest the spread of the virus.

Mr Swann suggested measures may include reducing the number of people who can meet together in a household.

The decisions will be made after ministers have taken advice from the Northern Ireland Chief Medical Officer Dr Michael McBride and Chief Scientific Adviser Prof Ian Young.

Both men told BBC Radio Ulster they believed changes to current Covid-19 rules were likely and they would be recommending lockdown-easing restrictions at Thursday’s executive meeting.

Northern Ireland has a higher rate per 100,000 of the population than the rest of the UK at present, said Prof Young.

Northern Ireland’s rate currently showed 24 cases per 100,000 over the past 14 days, evidence that pointed to the virus spreading again, he added.

There had been a tenfold increase in new infections since the beginning of July, he said, with almost 300 new cases being confirmed in Northern Ireland in the past week.

“At the beginning of July, it was three to four cases per day – that’s risen to the point where it’s been between 40 and 45 cases per day,” said the chief scientific adviser.

He warned that if the current trend was allowed to continue it would “inevitably” lead to more hospitalisations and deaths.

Dr McBride warned the pandemic was “a long, long way from over”, adding that the public needed to show the “the same, if not greater commitment as before” to curb the current rise in cases.

Northern Ireland was likely to see some changes in terms of the restrictions “that we have taken for granted” in recent months, he told BBC Radio Ulster’s The Nolan Show.

On Tuesday, Stormont’s Department of Health confirmed there had been one further coronavirus-related death, bringing its death toll to 559.

This rise in cases is concerning and clearly that’s why we saw Robin Swann, Dr Michael McBride and Prof Ian Young – yesterday do a media briefing.

The language used was plain: The health minister warned that Northern Ireland was in danger of sliding down a treacherous slope.

If this rise in cases continues – almost 300 in a week, 41 cases in the past 24 hours, according to Prof Young – it’s inevitable that hospital admissions and deaths will rise.

However, we need to keep it in context. It is worth noting that hospital admissions remain in single figures, and the majority of those testing positive are young and coping with symptons at home.

The briefing was used to jolt the public into remembering that we are still in this pandemic.

There could be an opportunity for the the so-called health trio to perhaps advise the executive that they might have to reintroduce some restrictions.

We’re not due to hear any more about easing until the end of August, so what we could see emerging is what has happened in the Republic of Ireland, where they’ve reduced the number of people allowed at gatherings in gardens, and in outdoor activities.

Health authorities in Dublin have reined in a lot of those restrictions, saying they have to because of the spike.

Mr Swann said there was no one trend to explain the recent rise in case numbers – otherwise it would be easier to act.

“We cannot put our finger on any specific, either location, or activity or industry as to a cause of the number of increases and positive tests we have seen.”

He also refused to rule out a return to full lockdown in the coming months.

The department said on Tuesday 41 new cases were diagnosed, bringing its total since the pandemic began to 6,471.

In the Republic of Ireland, the chair of the National Public Health Emergency Team’s (NPHET) Irish Epidemiological Modelling Advisory Group has warned that unless the country moves collectively and firmly to prevent further transmission of Covid-19, “we will see case numbers rise to a level that is unsustainable”.

In other developments on Wednesday:

Don't Miss it 5 things to know for August 19: Coronavirus, DNC, USPS, Russia, Mali
Up Next Australia is edging closer to obtaining a coronavirus vaccine – but will people actually get it?