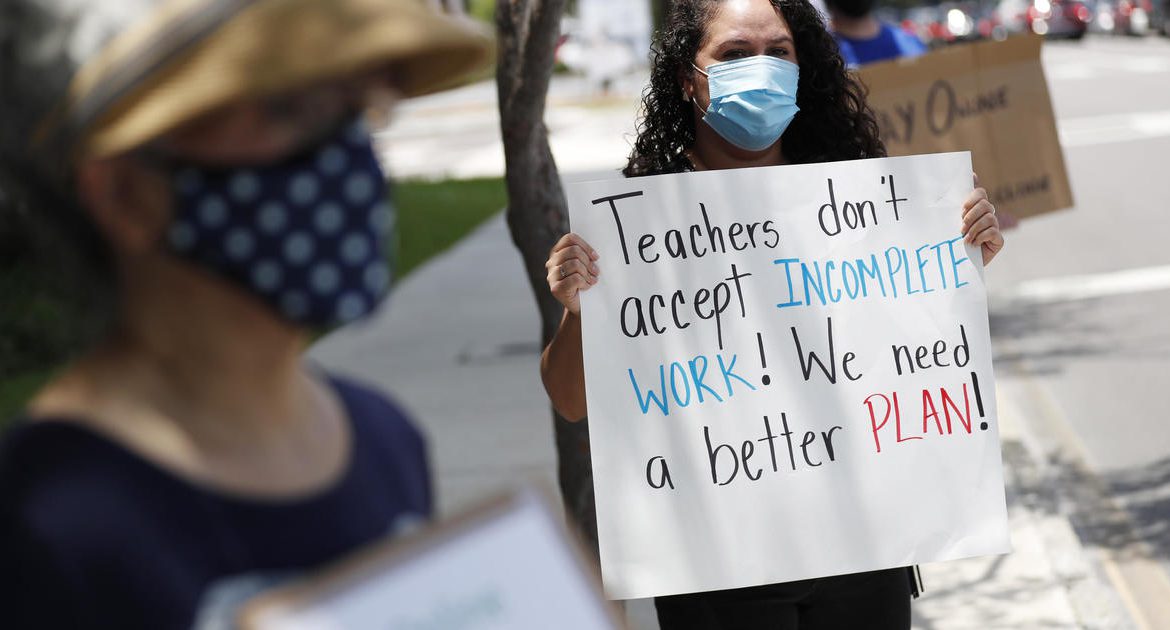 Teachers across the U.S. are protesting, calling in sick, quitting or taking early retirement rather than return to classrooms during a pandemic killing more than a thousand Americans a day.

Some of the country’s biggest school systems, including in Chicago and Los Angeles, are opting to remain closed to in-person instruction this fall. But others are plowing ahead with getting students back to class. Georgia, Indiana, Mississippi and Tennessee are among the states where schools have started opening, mostly in the suburbs and rural areas.

But the openings have not all gone smoothly, and teachers and their unions are decrying plans they feel don’t take their safety into account.

The 1.7-million American Federation of Teachers is calling for “safety strikes” if teachers are not protected, while the Florida State Education Association is asking a court to overturn a state order mandating that schools physically open five days a week or risk having their funding cut.

How to reopen schools amid pandemic

In Utah, plans to return to in-person classes have prompted at least 79 educators to resign or retire early across Salt Lake County, which has seen the most coronavirus cases in the state.

Jan Roberts, a third-grade teacher, is among those packing it up. Beyond concern for herself and her students, Roberts, 54, worries about bringing the virus home to her elderly father and young daughter.  “We’re just being told to jump in like nothing is wrong,” Roberts told the Salt Lake Tribune. “It’s not OK.”

The choice not to return to the classroom is heart-wrenching for Roberts and others, including Heidi Hisrich, a 42-year-old teacher at Richmond High School in Richmond, Indiana, who quit her “dream job” instead of resuming in-person classes in the fall.

“I am leaving the classroom I’ve been in for 13 years at the school that I expected I would stay at until I retired,” she recently told CBS MoneyWatch. “I thought I would be there another 15 to 20 years.”

When Hisrich quit on July 18, her school planned to run a full schedule at capacity, meaning Hisrich would see as many as 150 students. It wasn’t clear if masks would be required or even if protective gear would be provided. Some of those concerns appeared to be addressed in a plan revised four days later.

Kelly Treleaven, who teaches middle school English in the Houston, Texas, area, questions how many teachers will stick around if forced to return to the classroom amid a still-raging pandemic.

State leaders already “ignore teachers’ pleas for buildings without black mold creeping out of ceiling tiles, for sensible gun legislation, and for salaries we can live on without having to pick up two to three additional part-time jobs,” she wrote in an essay published Monday in the New York Times.

The virus concerns exacerbate a teachers shortage already in play since well before the coronavirus began its rampage across the U.S., with states lowering qualifications to teach to replace those who’ve left for higher pay and benefits, Treleaven noted.

“We’re about to see it get a lot worse,” she added.

Schools struggle with reopening amid COVID

Treleaven’s contention is borne out in a 2016 report from the Learning Policy Institute, which found that when school districts resumed hiring after years of layoffs during the Great Recession, many “had serious difficulty finding qualified teachers for their positions.”

Within three weeks of the first school districts reopening in Tennessee, more than a few have had to backtrack. At least 25 school districts in the state have closed schools or changed schedules due to exposures to the virus, according to the Tennessean. Roughly 110 school districts had begun the school year as of Aug. 13 — the majority in-person — and at least 97 COVID-19 cases tied to schools have so far been reported, the newspaper stated.

Teachers in Gwinnett County Public Schools, Georgia’s largest school district, returned to work to prep for in-person learning in the fall only to have 260 district employees barred the next week due to positive test results or exposure to those who had. The schools opened for online learning last week, while offering a staggered transition to in-person instruction for families that want it.

Classes were cancelled Monday through Wednesday in the J.O. Combs Unified School District in East Valley, Arizona, after a number of teachers made it clear they wouldn’t be showing up.

“While we continue to work diligently on this matter, we also continue to receive a high volume of staff absences,” district officials wrote in a statement released on Tuesday. The district will hold a school board meeting Wednesday evening to discuss “next steps.”

J.O. Combs was among a handful of Arizona districts that intended to reopen for in-person classes on Monday, according to the Arizona Republic. While COVID-19 cases seem to be trending lower, the state does not yet meet the recommended benchmarks set by its leaders, the newspaper reported.

Teachers at dozens of school districts stuck to their vehicles while protesting plans by some U.S. governors to resume in-class instruction during the coronavirus. The horn-honking by educators in cities including Chicago, Milwaukee and Philadelphia came amid demands that instruction be offered online until tests show that classrooms are safe and districts hire more nurses.

In Minnesota’s Hennepin County, dozens of teachers parked their cars outside Osseo Area Schools headquarters last Thursday, according to a local news report. One sign covering a windshield offered a edict popular with the crowd: “Stay Online Until COVID Declines.”

Don't Miss it The spread of coronavirus is not the fault of individuals but a result of neoliberalism | Australian politics
Up Next UK coronavirus live: Scotland records highest number of daily cases in almost three months | World news