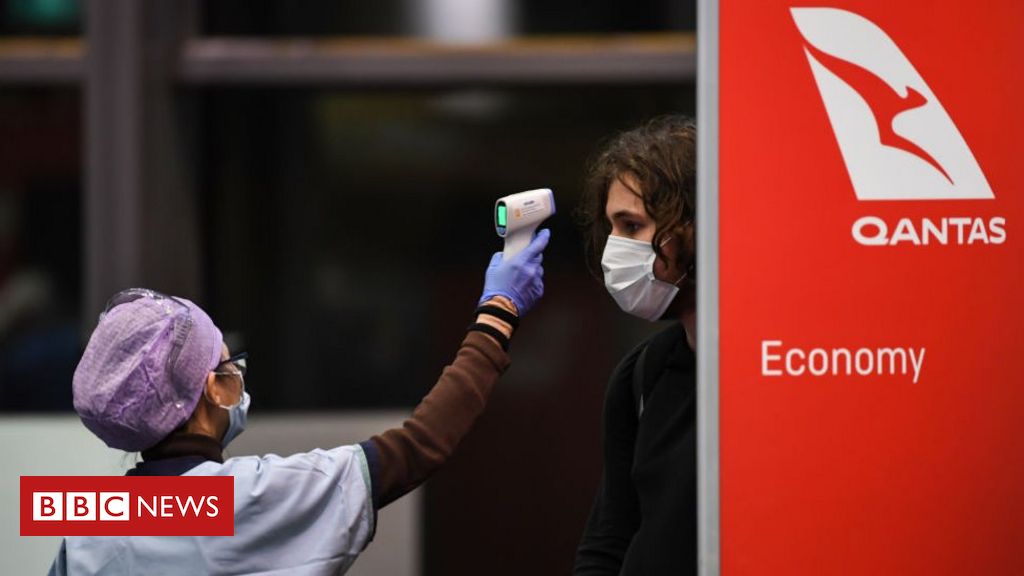 Qantas has reported an annual loss of almost A$2bn (£1bn; $1.4bn) as it deals with the impact of the coronavirus pandemic.

The Australian flag carrier’s boss says trading conditions are the worst in the airline’s 100-year history.

The firm also says around 4,000 of its 6,000 planned job cuts are expected to be finalised by the end of next month.

The global airline industry has been hit hard as travel restrictions have been imposed around the world.

“The impact of Covid on all airlines is clear. It’s devastating and it will be a question of survival for many,” Qantas Group chief executive Alan Joyce said in a statement.

“Recovery will take time and it will be choppy,” he added.

Mr Joyce also warned that he expects a “significant underlying loss” in the next financial year.

Qantas said much of this year’s loss was due to writing down the value of assets and redundancy payments.

With Australia’s international borders all but shut and no sign of this changing, the Sydney-based carrier reiterated it was not anticipating resuming international flights until July 2021 at the earliest – with the possible exception of flights to New Zealand.

In June Qantas announced that it would make 6,000 of its workers redundant as part of its plans to survive the coronavirus pandemic.

The airline said around two thirds of those redundancies would be completed by the end of September. The cuts equate to about a fifth of the airline’s total workforce prior to the Covid-19 crisis.

On top of the job cuts a further 20,000 Qantas workers remain temporarily stood down.

Carriers around the world have announced billions of dollars of losses and tens of thousands of job cuts after the near-destruction of their normal businesses.

When no news is bad news

A promo email I received from Qantas this week was sobering. In normal times it’d be packed with enticing destinations, but this one offered me just one deal out of Sydney – a flight within New South Wales to Byron Bay.

An airline struggling during this pandemic is barely news – but Qantas has a particular set of problems.

Unlike pretty much anywhere else in the world, Australia’s government has banned its citizens and permanent residents from leaving the country. You can apply for an exemption, but few are given. So that has killed the international business.

Likewise no visitors are allowed in – and even Aussies are struggling to return amid tight caps on the number of people who can be in mandatory hotel quarantine. The few overseas flights that you spot in the empty skies only have a handful of passengers on board – and Qantas has stayed out of this market.

Domestic travel is where Qantas really thrived. Those Sydney-Melbourne flights were a cash cow. But pretty much every state and territory has shut its borders to everyone else, so the options for travelling are slim. In the capital Canberra, the airport has so few passengers coming in and out now that it closes on Saturdays, with concerns this is just the start.

Qantas is a brand many Australians love. And among those who can still afford to, there’s pent up demand to fly again as soon as possible.

But it feels it’ll be a very long time until those promo emails are chock-a-block once more.