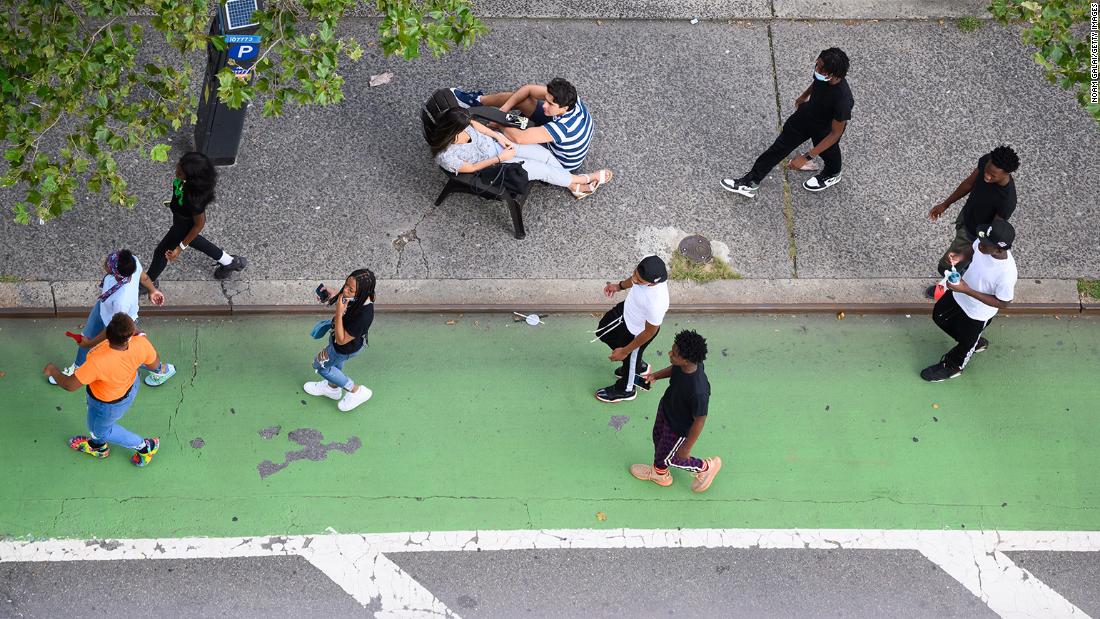 US trends are now “going in the right direction,” Adm. Brett Giroir, the Trump administration physician overseeing US coronavirus testing, said Wednesday during a telebriefing. He attributed the decline in part to safety protocols like masks and social distancing.

The daily average number official new coronavirus cases reported in the US has been declining for weeks. Cases over the past week averaged about 47,300 as of Wednesday, down from a peak average of 67,317 on July 22, according to Johns Hopkins University data.

State leaders who have reported a leveling of new cases also attribute it to adherence to safety guidelines. In Washington state, where health officials say the rate of new cases is slowing, “face coverings have made a difference,” Secretary of Health Dr. John Wiesman said.

Twelve states’ average daily cases have risen at least 10% against the previous week, including Hawaii, JHU data show. Hawaii’s state capital dramatically tightened restrictions on gatherings — both indoors and outdoors — in an effort to control a surge of cases.

Despite the hopeful signs, now isn’t a time to ease measures, Giroir cautioned.

“This could turn around very quickly if we’re not careful,” Giroir said. “We saw that early on after Memorial Day and the couple weeks afterward that sort of started the current outbreak.”

The country had seen cases surge from mid-June into late July, after states lifted restrictions to curb the spread of the virus. In response, more than half the country halted reopening plans and enacted new measures to slow a spread that experts said was out of control.

Though case rates have dropped in recent weeks, daily deaths — which experts say can spike weeks after a jump in new cases — have recently been at a relatively elevated level.

The country’s seven-day average for daily Covid-19 deaths has been above 1,000 for 24 straight days as of Wednesday, after seven weeks of below 1,000.

The seven-day average of test-positivity rates in the US dropped to 6.3% as of early Thursday, down from 8.5% in mid-July, according to the Covid Tracking Project.The director of the US Centers for Disease Control and Prevention has suggested communities’ positivity rates should be below 5% to comfortably reopen schools. At least 26 states averaged above 5% as of Wednesday.US leaders appealed to young people to skip social gatherings and practice safety guidelines. Younger groups, experts said, helped drive the rise in cases over the summer. As they head back to college campuses now, universities have already reported hundreds of positive tests.

Texas, Mississippi and Georgia report most new infections per capita across a week

Meanwhile, states across the South and West continue to report the most daily infections when adjusted for population.

Texas led the country per capita with the most cases per day over a seven-day average as of Wednesday, followed by Mississippi and Georgia.

Texas’ governor has issued a mandate requiring face masks, and Mississippi mandated mask-wearing in public statewide for two weeks this month. Georgia has not issued a statewide mask mandate.As Georgia schools reopened this month, many reported hundreds of students and staff were in quarantine after officials identified positive cases. A photo of a crowded Georgia high school hallway with nearly no masks in sight raised concern across the country. One school district announced it would begin the year with virtual learning after more than 90 staff members were forced to quarantine.

An August 16 White House Coronavirus Task Force report obtained by The Atlanta Journal-Constitution said Georgia was in the task force’s “red zone” for outbreak severity as measured by rate of case growth and test positivity.

The panel recommended that Georgia do more to fight the spread, including closing down bars and gyms, limiting indoor dining at restaurants and reduce social gatherings to 10 or fewer people.

Gov. Brian Kemp pushed back during a news conference Wednesday, a day after his state topped the rankings by population.

“If we’re the highest (per) capita in the state right now, that’s because Texas and Florida and Arizona and some of the states that were peaking a week or two ago are on the downclimb,” Kemp said.

Georgia’s health department continues to “urge Georgians to wear a mask, watch their distance, wash their hands, and follow public health guidelines,” Kemp’s office told CNN in a statement. The state’s seven-day case average is down and hospitalizations are down, governor’s spokesman Cody Hall said Wednesday.

“The data is encouraging but we cannot take our foot off the gas,” Hall said.

How universities are responding

The University of Mississippi said in a memo Wednesday that 15 student-athletes and one employee tested positive for the virus. Of the athletes, 11 are on the same team but the university did not say which sports the positive tests came from.

At the University of Connecticut, several students were removed from their on-campus housing after the university found they held an “unapproved gathering in a residence hall room.”

“Students were not wearing masks, closely assembled, and endangering not only their own health and wellbeing, but that of others at a time when UConn is working to protect our community and resume classes in the context of a deadly global pandemic,” the associate vice president and dean of students, Eleanor JB Daugherty, and the executive director of residential life, Pamela Schipani, wrote in a letter Tuesday to the community.

The University of Notre Dame announced all undergraduate classes will be remote for the next two weeks as the university tries to get a spike in cases under control. Michigan State University has also announced the year will start remotely for undergraduate students. In New York, Ithaca College announce remote instruction will be extended for students for the entire fall semester.

Don't Miss it Coronavirus: Putin says vaccine has been approved for use – BBC News
Up Next Coronavirus cases in England increase by 27% in a week | World news