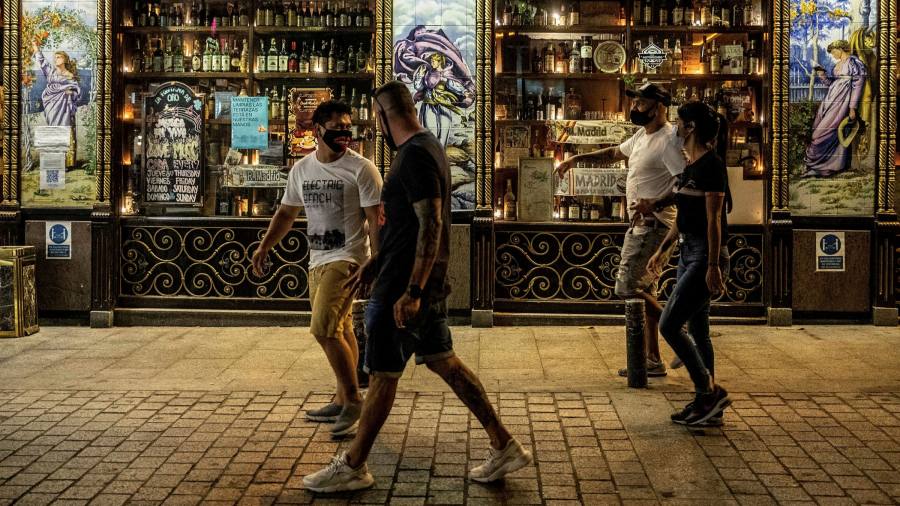 Coronavirus is spreading far faster in Spain than in the rest of Europe, confronting the country with a race against time to bring the outbreak under control before the return to school and work next month following the holiday season.

Figures published by the European Centre for Disease Prevention and Control, an EU agency, on Friday indicated that in the previous 14 days Spain had reported about 145 new Covid-19 cases per 100,000 of population.

Apart from Malta, no other European country had a ratio above 100, and the Spanish figures compare with ratios of 51 in France and 21 in the UK.

In three districts of Madrid, the Spanish region with most cases, the equivalent ratio is above 400 and in one it is almost 600. On Friday, the regional government of Madrid urged people in the worst-affected areas to stay at home.

“No one should be confused: things are not going well,” Fernando Simón, the doctor leading the country’s effort against the pandemic, said on Thursday evening, as he acknowledged that in some areas of the country the spread of the virus was out of control.

National and regional officials largely blame the speed of the virus’s resurgence on uncontrolled groups of youths drinking and socialising — as well as gatherings of family members — and are beginning to warn that despite months of planning, pupils may not be able to return to classes in full.

Dr Simón pleaded for social media influencers to use their clout with young people to persuade them of the dangers of the virus. “We can’t allow this to go on,” he said. “I understand that people want to party, but there are lots of ways to party.”

Critics say that Madrid and Spain as a whole need to step up their effort to track and trace the virus spread. In Madrid, where more than 2,800 new cases were reported on Friday, there are about 550 trackers.

“Unless citizens take responsibility, in terms of staying at home if they have been in contact [with someone infected], we could have the best tracking in the world and it won’t be enough,” Enrique Ruiz Escudero, the Madrid region’s top health official, told the Financial Times. “Most of the outbreaks we have detected have been family or social gatherings, when people relax and think they can’t be infected.”

With the disease resurgent in a city that has been largely deserted for the beach, the challenge is to avoid a disastrous further surge when people return to schools and work in around two weeks time, as well as during the autumn flu season.

As is the case in countries such as France and Germany, the number of daily cases recorded in Spain has already returned to levels not seen since spring. On Friday, the health ministry reported more than 8,000 new cases and said that 125 people had died in the previous week. This compares with a death toll of 22 in the week up to August 6.

Mr Ruiz Escudero emphasised that current hospitalisations and intensive care cases are a fraction of the levels reached during the pandemic’s peak in March and April, and that those affected are on the whole much younger than before. About half of all Spain’s new cases are asymptomatic.

He added that the high totals in Madrid were partly the result of large-scale random testing in the most affected areas, rejecting criticism that the region’s centre-right government was too quick to relax controls when Spain’s nationwide lockdown ended on June 21.

Madrid, together with the rest of the country, is now reimposing some controls, this week decreeing the closure of nightclubs and discos — although on Friday a judge was reported to have overturned the order.

Mr Ruiz Escudero said the region was looking at “all possible scenarios” for the return to school, including part-time attendance, and called for nationwide agreement on protocols for how schools should respond to Covid-19 cases.

“The phase-out of the lockdown accelerated too much in June,” said Miguel Otero, an analyst at the Elcano institute, a think-tank, who served on a government committee on the transition to a new normality. “People had the impression the virus was coming under control and there was huge pressure on the economy to reopen, particularly the tourism and entertainment sectors.”

Mr Otero also suggested that part of the reason why Covid-19 was now more prevalent in Spain than elsewhere was the country’s love of bar-hopping and of family gatherings.

Don't Miss it US Coronavirus: Covid-19 deaths should start dropping across US by next week, CDC chief says
Up Next Today’s coronavirus news: Ontario reporting 131 new cases; TTC passengers to get Presto credit for unused monthly fares