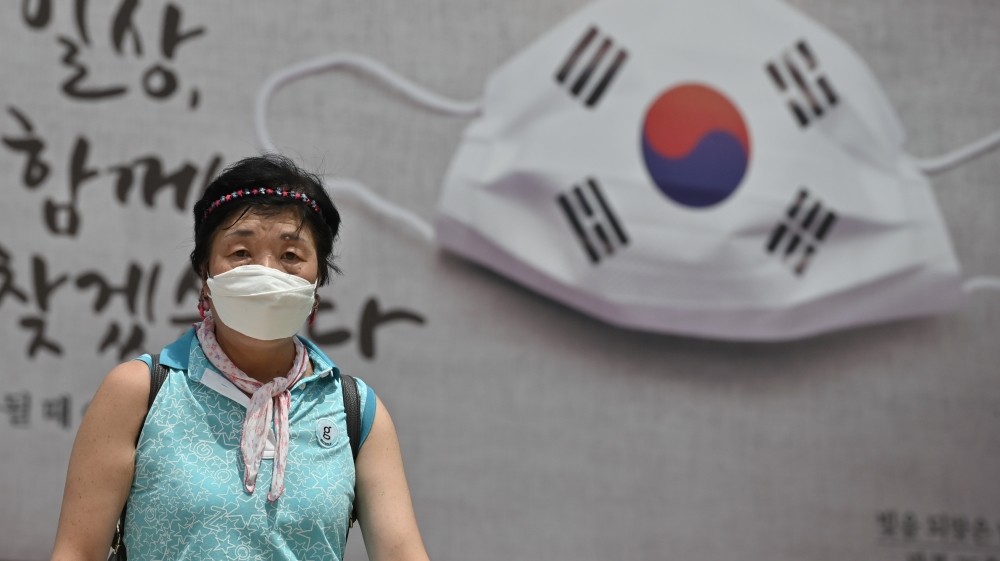 Joe Biden, the Democratic presidential nominee, said he would shut down the United States to contain its coronavirus outbreak if experts recommended such a measure.

Brazil’s COVID-19 outbreak is stabilising and any reversal of the virus’s rampant spread in the vast country would be “a success for the world”, the World Health Organization said.

More than 22.8 million people have been diagnosed with COVID-19 around the world, and more than 14.6 million have recovered. More than 797,000 people have died, according to data from Johns Hopkins University.

Drug developer Moderna Inc said it has so far enrolled 13,194 participants in the ongoing late-stage 30,000-volunteer US trial testing its COVID-19 vaccine candidate.

In a tweet, the company also said that 18 percent of the participants currently enrolled are Black, Latino, American Indian or Alaska Native, groups among the hardest hit by the coronavirus virus pandemic.

Moderna began the study of its vaccine candidate, mRNA-1273, in July and expects to complete enrollment in September.

South Korea banned large gatherings, shut down nightspots and churches and removed fans from professional sports nationwide in an attempt to slow a resurgence of coronavirus infections.

Most of the new cases were in the Seoul metropolitan area, which has been at the center of the viral surge of recent weeks. But infections were also reported in practically every major city and in towns across the country.

The government had already imposed the tighter restrictions in the capital region earlier this week, a move they resisted for months out of economic concerns.

Australia’s second most populous state, Victoria, reported 13 new coronavirus deaths in the past 24 hours, authorities said, while new infections in the hotspot state remained below 200 for the second consecutive day.

“It’s great to see two days in a row under 200, certainly we are trending down,” said Brett Sutton, the state’s chief health officer. “The best way to safeguard against a third wave is to bring that number down to the lowest feasible, possible level.”

The state reported 182 new cases on Saturday, up from the 179 new cases and nine deaths a day earlier, but down from over 700 a day two weeks ago.

Boeing Co said it is developing a hand-held wand that emits ultraviolet light to neutralise bacteria and viruses, part of a suite of methods to disinfect flight deck surfaces and controls, as well as surfaces throughout the cabin.

The wand would eliminate the need for using alcohol or other disinfectants that could damage sensitive electronic equipment, Rae Lutters, chief engineer for Boeing’s ecoDemonstrator programme, told a media briefing.

Joe Biden, the Democratic presidential nominee, said he would do whatever was needed to keep the US safe amid the coronavirus pandemic even if that meant shutting down the country.

“I will be prepared to do whatever it takes to save lives because we cannot get the country moving until we control the virus,” Biden said in an interview with ABC.

“In order to keep the country running and moving and the economy growing, and people employed, you have to fix the virus, you have to deal with the virus.” And if scientists recommended shutting down the country, “I would shut it down,” Biden added.

The interview airs on Sunday night, but clips were provided on Friday.


US outbreak: Border towns with poverty suffering the most (2:39)

The United States closed lanes at select ports of entry at the border with Mexico and will conduct more secondary checks to limit non-essential travel and the spread of coronavirus, according to a US Customs and Border Protection (CBP) official.

Non-essential travel has been restricted at the border since March, but the curbs have mostly been applied to Mexican citizens. The new measures appeared to be aimed at US citizens and legal residents living in Mexico.

“We need people to think twice about non-essential travel and to ask themselves if the travel is worth risking their lives and the lives of others,” El Paso CBP spokesman Roger Maier said in a written statement.

00:36 GMT – Nigeria to bar entry for citizens of countries that block Nigerians

Hadi Sirika, Nigeria’s aviation minister, told airline and travel industry representatives that the Nigerian government will bar entry to nationals of countries that impose travel bans on Nigerians during the coronavirus pandemic.

“If they ban both the passengers and the carriers together, then that’s what’s going to happen,” Sirika said on a Zoom call.

“Our numbers are not equal to the numbers we’ve seen in Europe,” Sirika said, adding that with travel bans, “we feel that it is discriminating against our people”.

The new figures mark a sharp decline in cases, compared with a peak of more than 13,000 infections a day seen in July. South Africa now accounts for more than half of Africa’s cases and its death toll – 12,483 fatalities – make up around 47 percent of the continent’s deaths.

“We believe that South Africa is in a way moving past the point of the peak of the pandemic; we believe we have gone beyond the inflection point,” Health Minister Zweli Mkhize said on Wednesday.

For all the key developments from yesterday, August 21, go here.