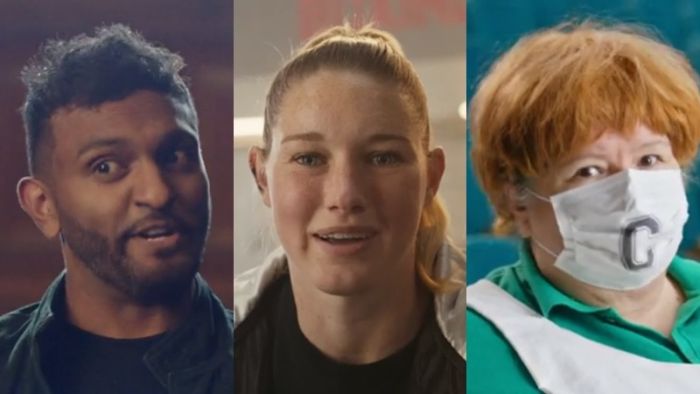 The Victorian Government has released a star-studded new campaign urging citizens to abide by lockdown rules as the state grapples with the ongoing coronavirus outbreak.

Among the stars featuring in the campaign is Magda Szubanski as Kath and Kim’s Sharon Strzelecki, a bumbling yet well-meaning netball player and friend to the eponymous mother-daughter duo.

“It’s not the lockdown that’s the enemy; it’s the virus,” Sharon says as she misses a shot on the court thanks to her “carpal tunnel”.

Other big-name comedy inclusions are “Dunny man” Shane Jacobson, who is perhaps best known for his role in the 2006 film Kenny, and acclaimed comedian, actor and radio presenter Nazeem Hussain.

Cravat-adorned celebrity food critic Matt Preston also appears in one clip, where he conjures a silk mask while sharing his love of “lingering over a coffee … at a cafe”.

Space to play or pause, M to mute, left and right arrows to seek, up and down arrows for volume.WatchDuration: 2 minutes 16 seconds2m 16s A range of high-profile Victorians joined the campaign.

Stage 4 restrictions, including a citywide curfew, were imposed on Melbourne just under three weeks ago and have been met with some resistance.

Victoria Police issued 161 fines for suspected breaches in the 24 hours to 11:00am.

Of these, 24 were issued to people who failed to wear a face covering, 58 to people breaching curfew, and 13 fines were issued at vehicle checkpoints.

One of the fines issued was to a man not wearing a mask near Flinders Street Station who told police he “did not believe in restrictions”.

Another man was fined for walking in Abbotsford between 8:00pm and 5:00am and told police he “forgot” why he was outside.

The stars were offered a $2,000 fee to appear in the new ad campaign and several donated the fee to charity, Premier Daniel Andrews said.

“It bears no relation to what their commercial rate might be,” Mr Andrews said.

“We are very grateful for them being part of it.”

Don't Miss it Coronavirus UK: Outbreak at a B&Q distribution centre
Up Next Coronavirus: What are the risks of catching it from food packaging?