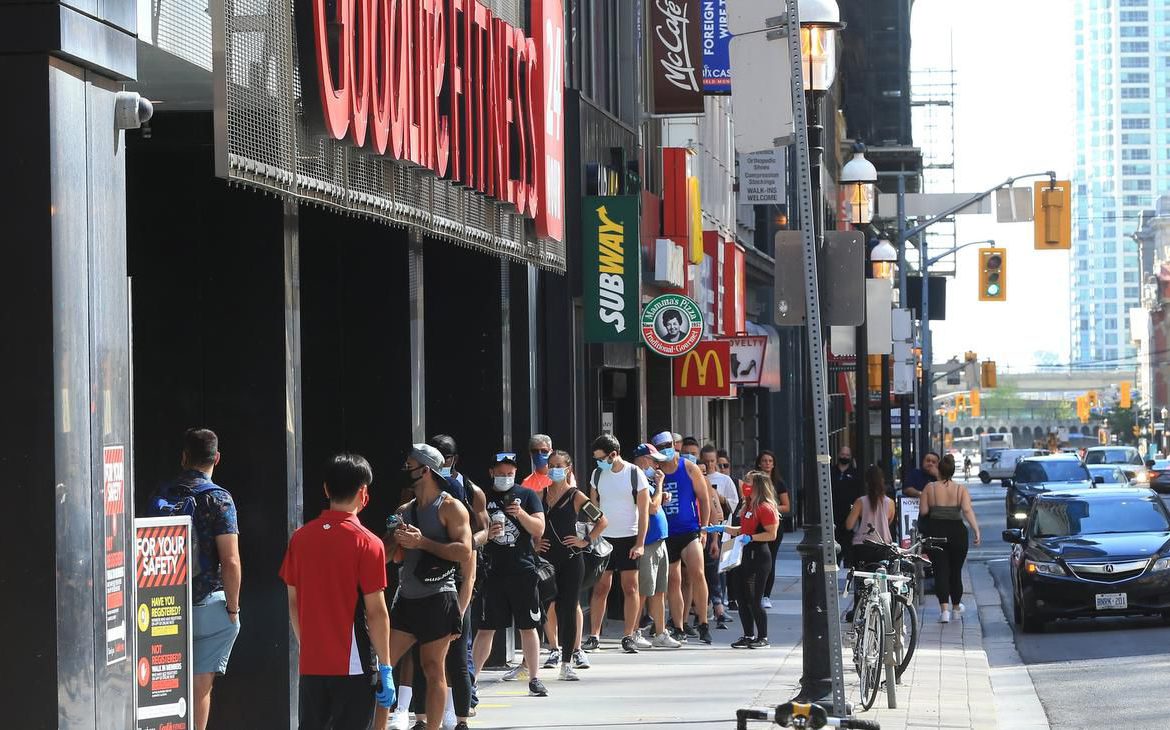 The “steady” growth in COVID-19 infections province-wide has one expert who keeps a close eye on the trends concerned.

While there haven’t been dramatic spikes in daily case counts, the increases have been consistent “for a prolonged amount of time,” said Ryan Imgrund, a biostatistician at Newmarket’s Southlake Regional Health Centre.

“That’s where I get worried.”

Imgrund has been tracking the effective reproduction number — known as Rt, or how many others a person with COVID will typically infect — for Ontario throughout the pandemic.

This number fluctuates over time, depending on behaviour such as social distancing and mask use. Without any of this, the reproduction rate of COVID-19 is somewhere between two and four.

It should be below one in order to keep infections low.

Since July 29, the Rt in the province has jumped from 0.8 to 1.35, said Imgrund, who calculates it based on the daily case tallies and the dates they are passed on from one person to the next.

“It’s increased almost every single day. There was a little dip around Aug. 8 to Aug. 10, but it has been pretty much above one since Aug. 5,” he said.

“That does concern me.”

Ontario reported 108 new cases Saturday, a 0.3 per cent increase, with one new death and almost 29,000 tests processed. Twenty-seven of the province’s health units reported five cases or fewer, with 16 reporting none, tweeted Health Minister Christine Elliott. That’s down from 131 reported cases on Friday, a spike the province blamed on a data reporting gap from some health units.

But when the Rt is above one for more than a week or so, it indicates “more of an actual trend” rather than “a fluke,” said Imgrund. It’s hard to know where this is coming from, but it could be tied to new infections around Phase 3 reopenings of places such as bars and gyms.

“If we continue to see it tick up, we need to start to make some other choices possibly at that time, which may include shutting down some of the more higher-risk things that we have allowed to open,” he said, “such as bars and maybe gyms, too, that don’t have the proper precautions around masking when doing heavy cardio.”

The province’s new cases now seem to be clustered in a few urban centres, including Ottawa and Waterloo, instead of more rural pockets where they were a few weeks ago, Imgrund said.

Toronto’s Rt is at 1.08, and has been above one since Tuesday, he said. There were 41 new cases reported by Toronto Public Health in the city Friday and 19 on Saturday.

“Toronto seems to be following along with what’s happening at the provincial level, whereas the hardest-hit region in the GTA seems to be Peel,” Imgrund added.

Peel has a Rt of 0.97, “but a lot of the cases have been a lot more recent in terms of symptom onset,” he said. In the last 24 hours there’s been 30 new cases there, according to the local public health unit.

“That is definitely the most troubling region I’ve seen in the GTA.”

Peel Public Health staff said in an email that they have “seen case numbers slightly increase recently, and any increase is concerning.” However, they continue to monitor various indicators in a weekly report and “it is positive to note that we have not seen a paralleled increase in severe cases.”

They attribute the uptick to social gatherings such as BBQs and backyard parties. They’ve also seen an increased number of new cases related to travel, “which is worth a reminder to those leaving their region, and leaving Ontario, to be extra vigilant.”

Asked about concern over the increase in the daily case count on Friday, Dr. Christine Navarro, associate medical officer of health for Toronto, said in an email that “some daily variability in reported cases is expected and can reflect lab testing patterns (both when people choose to get tested and how and when labs collect and run their tests) and likely represents infections that were acquired over many different days.”

The agency watches for patterns closely, but “considers a seven-day moving average as a better reflection of any concerning trend. We encourage the public to follow the additional indicators we are monitoring on our COVID-19 Monitoring Dashboard,” she added.

According to that dashboard the seven-day moving average for new cases is a positive “green” at 23, as is the overall current status for the city, which includes other indicators including hospitalizations and institutional outbreaks.

The seven-day average was up provincially, as of Friday, to 102 cases and 0.9 deaths per day by the Star’s count.

Most of the province’s new cases Saturday (44) were in younger people (ages 20 to 29). Earlier this past week, Mayor John Tory told reporters that the average age of those infected has shifted to 39 in the last two weeks, compared to 52 for the duration of the pandemic so far.

“The proportion of cases among those who are less than 19 years of age and those 20 to 29 years of age has increased significantly in the last few weeks,” he said, urging younger people to take the threat seriously and remember they are not “immortal” or “invincible.”

On Friday, Tory joined mayors from across the GTA and Hamilton in issuing a warning to Gen Zers and millennials to continue to follow public health advice, social distance and wear masks.

It’s very rare for a young person to die or have serious complications from the virus, but it can happen.

In Montreal, a 19-year-old who was identified Saturday in multiple media reports as Don Béni Kabangu Nsapu, a healthy high school athlete, became that province’s first under-20 victim.

With files from David Rider and Ed Tubb

Hours before the onset of the Yom Kippur fast day, religious leaders and the Health Ministry are calling on their…

Three more counties in Wales are to be put into local lockdown following a rise in coronavirus cases. Neath Port…

Travellers from Dubai and the UK were primary sources of Covid-19 importations into India, according to an analytical study done…

“On Rosh Hashanah it is inscribed, and on Yom Kippur it is sealed.”These are the words that millions of Jews…

Image copyright Getty Images President Donald Trump’s response to the coronavirus pandemic, in which more than 200,000 people in the…