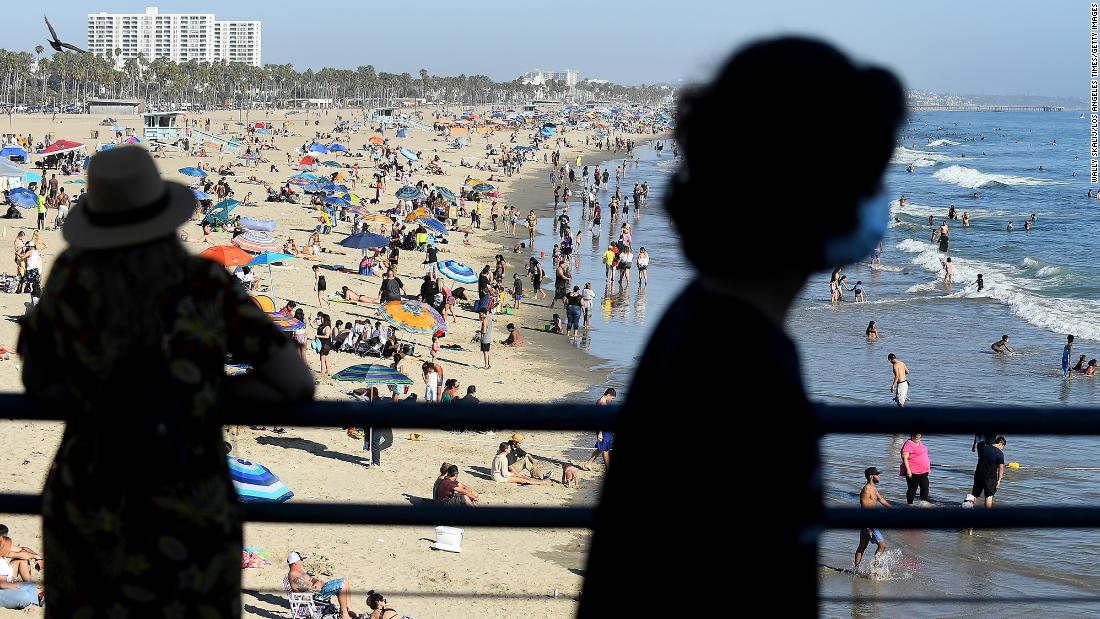 Universities in at least 15 states have reported outbreaks, some tied to large group gatherings.

Following what the dean of students and head of public safety called “incredibly reckless behavior,” 23 Syracuse University students were suspended Thursday after gathering on the campus quad at night. The next day, citing “a rapidly escalating increase” in the percentage of people testing positive for the virus, the University of North Carolina at Chapel Hill announced that testing would be implemented for three residence halls.

Meanwhile, at least 26 cases of coronavirus in three states are being linked to the Sturgis Motorcycle Rally, which drew thousands of people to South Dakota earlier this month.

And an individual who tested positive for the virus after a Maine wedding reception has died according to a statement Saturday from Robert Peterson, CEO of Millinocket Regional Hospital. At least 32 positive cases were linked to the August 7 wedding, CNN has previously reported.

“We are sorry to share that this patient passed away early (Friday) afternoon. Our thoughts and sympathies are with her family as they cope with this difficult loss,” Peterson said.

“It will take a concerted effort but the impact is extraordinary, it’s really quite extraordinary what it could achieve,” Murray, chief of the University of Washington’s Institute for Health Metrics and Evaluation, told CNN’s Anderson Cooper on Friday night. “It really depends on what our leaders do, (both) as individuals, and what governments do.”

IHME projected that if nothing about the nation’s approach to prevention changed, death rates would dip in September but rise later in the fall, and the total would reach about 310,000 by December 1.

But if significantly more people — about 95% of the US population — wore masks, the projection of total deaths from now to December would drop by almost 70,000, he said.

On the other hand, if governments ease current social distancing restrictions and mask mandates, the daily US death toll could reach 6,000 by December, up from his current prediction of 2,000 daily, Murray said.

Over 176,000 people have died of Covid-19 in the US since the pandemic began, and more than 5.6 million have been infected, according to data from Johns Hopkins University.

New York and New Jersey were early hotspots of the coronavirus pandemic but both reported encouraging signs this week.

“It’s incredible what we’ve achieved by pulling together as one New Jersey family, but we’re not over the finish line yet. Keep it up,” he posted.

And New York Gov. Andrew Cuomo’s office reported in a news release Saturday that the infection rate in the state stayed below 1% for 15 straight days, setting a new record low.

For the first time in two months, the number of coronavirus-related hospitalizations in Mississippi dropped below 1,000, according to Gov. Tate Reeves.

Concerns and questions around the new school year

The start of a new school year with in-person classes has brought trepidation to some Americans as more young people suffer infections.

In Florida, a 6-year-old girl became the youngest person in the state to die from coronavirus complications. Health officials say they still don’t know if the child contracted the virus from a known case or if it was travel related.

Many schools across the country have implemented increased measures to protect students and staff against the virus, even though researchers are still learning how the virus spreads among young children.

For older students, universities have responded to rising numbers with more preventative measures.

On Friday the University of Miami reported four students in its Hecht Residential College had tested positive for Covid-19, officials said on the university’s Covid-19 website. Those students, and several others “who have shown symptoms,” were immediately removed from their floors and are in isolation, officials said.

“I think it’s everywhere. I don’t think there’s any hiding from it. I think just protecting yourself is the best thing you can do,” Kari Thronson, the parent of a college freshman, said.

Many colleges have already reversed plans for in-person classes and returned to remote learning after coronaviruses cases were detected on campus, leading to quarantines.

Towson University in Baltimore County, Maryland, is temporarily moving to online classes after 55 people tested positive for Covid-19 on campus over two days last week, the university said Saturday.The University of Notre Dame in Indiana announced Tuesday that undergraduates would be learning remotely for the next two weeks after a spike in Covid-19 cases since students returned to campus on August 3. Since August 3, 372 students had tested positive, according to Notre Dame’s online health dashboard.

Don't Miss it New tests which detect coronavirus in 90 minutes to be rolled out in England – BBC News
Up Next Russia plans Covid-19 vaccine output at 6 million doses a month: Report