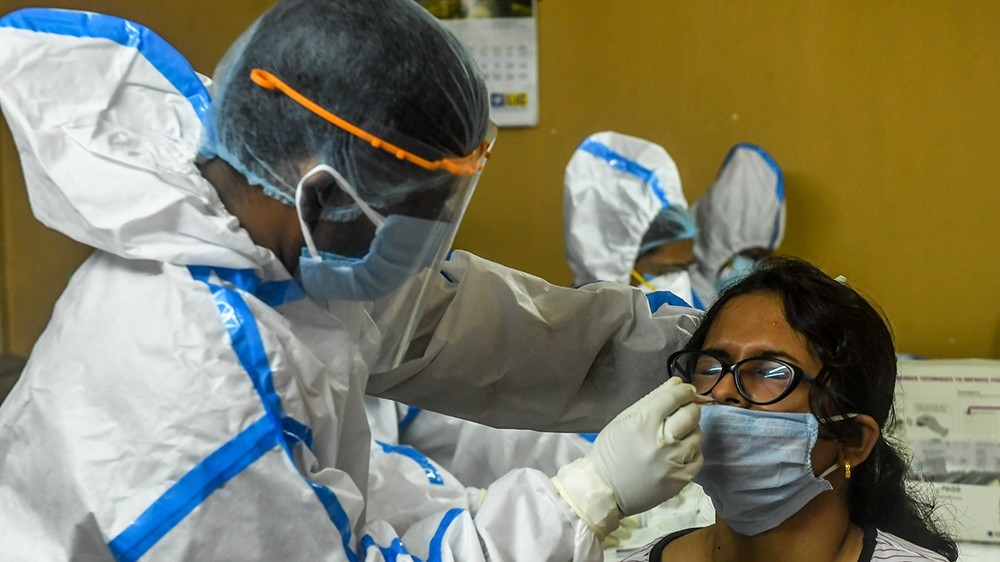 Health experts are concerned about the Indian government’s decision to implement rapid tests – which screen for antigens, or viral proteins – as authorities ramp up coronavirus tests amid surging infections.

India crossed the three-million-case milestone on Sunday, 17 days after it crossed the two-million mark. It is the worst-affected country in Asia, and third behind the United States and Brazil globally.

In June, the world’s second-most populous nation began using cheaper, faster, but less accurate tests to scale up testing – a strategy that the US is now considering.

These rapid tests boosted India’s testing levels nearly five-fold within two months. But government numbers suggest some parts of the country might have become over-reliant on the faster tests, which can miss infections.

Experts warn that safely using them requires frequent retesting, which is not always happening as cases surge faster than labs can scale up since India’s harsh lockdown was relaxed.

So far, authorities have rationed the use of the more precise molecular tests that detect the genetic code of the virus. And on June 14, India decided to bolster these with the faster tests.

Albeit less accurate, these tests are cheap and yield results in minutes. Most do not require a lab for processing or any specialised equipment or trained personnel.

The plan was to rapidly increase testing to identify infected people and prevent them from spreading the virus. Samples tested using both tests increased from 5.6 million in mid-June to 26 million two months later, and nearly one-third of all tests conducted daily are now antigen tests, health officials say.

But India’s experience also highlights the inherent pitfalls of relying too heavily on antigen tests at the expense of more accurate tests. The tests may falsely clear many who are infected, contributing to the spread of the virus in hard-hit areas.

Rapid test results can be backstopped with more accurate laboratory tests, but these are slower and more expensive.

Experts also warn that since the two tests vary in accuracy, they need to be interpreted separately to properly assess the spread of infection – something India is not doing.

The US faces a similar need to strike a balance between speed and precision, with overburdened labs struggling to keep pace with the outbreak.

Researchers at Harvard and elsewhere are proposing developing a $1 saliva-based antigen test for all Americans to test themselves daily, something that has not yet been approved by the Food and Drug Administration.

Harvard’s Dr Michael Mina says antigen tests do not catch as many patients in the early stages of infection when virus levels are low. But these people are not considered the greatest threat to spreading the disease since it is only after virus levels surge that they become more infectious, and by then they will be identified by antigen tests, he told the Associated Press.

“If their symptoms change, you want to think about retesting those people.”

Indian health officials have asked those who test negative with antigen tests but have symptoms to be retested with the more accurate laboratory tests.

But India has largely been opaque about how many negatives were being retested, and what type of tests were being used.

Delhi state, which includes the Indian capital, New Delhi, and where the High Court is monitoring testing, was among the first to aggressively use free antigen tests to screen patients.

Centres were created in dispensaries, schools and government offices. But only 0.5 percent, or 1,365 of over 260,000 people, who tested negative from June 18 to July 29 were retested, court documents show. Delhi conducted more than 280,000 tests in this period.

“That is abysmally low,” said Dr SP Kalantri, a public health specialist in Maharashtra, India’s worst-hit state, adding that the decline in the use of more precise lab tests by nearly half, from 11,000 tests daily to just 5,400 tests per day, was a worrying trend.

Not a ‘perfect substitute’

Under guidelines set by the World Health Organization (WHO), India should be conducting approximately 140 daily tests per million people in order to safely relax coronavirus restrictions.

Rajesh Bhushan, India’s top health official, has repeatedly pointed to the country’s cumulative total of the two types of test to assert that India is testing more than the WHO standard.

Authorities also use this to calculate the percentage of samples testing positive, which is a key metric for judging testing performance.

But Jha said combined data from the two types of tests cannot be used to conclude that infections in India are going down, since using less accurate tests would automatically drive down the number of positive results.

Experts fear that over-reliance on antigen tests without retesting could impede efforts to contain the virus as it spreads to states with fragile healthcare systems, like Bihar and Uttar Pradesh, with a combined population of more than 300 million.

Jha said the antigen tests were a way to expand testing for people who do not have access to laboratory tests, but that that did not mean the use of more accurate tests should decrease.

“I want both,” he said. The rapid test “isn’t a perfect substitute.”