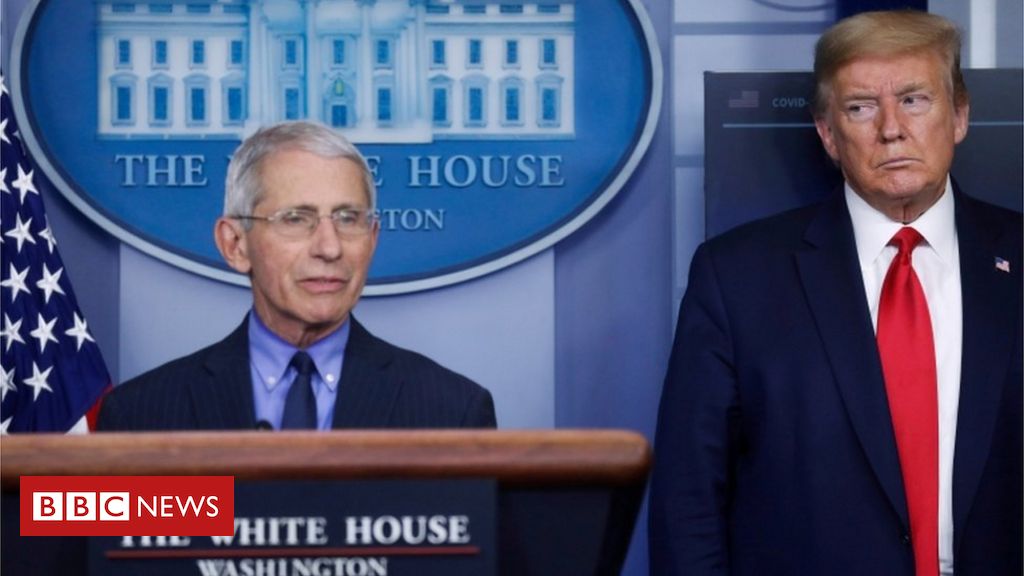 The president has publicly criticised Dr Fauci in the past

The top US virus expert has warned against rushing out a Covid-19 vaccine before it has been proven to be safe and effective.

Speaking to Reuters news agency, Dr Anthony Fauci also said doing so could hurt the development of other vaccines.

US President Donald Trump is reportedly considering plans to put out a vaccine before it has been fully tested.

Such a move could boost his chances of re-election in November’s presidential election.

Democrats accuse the US president of being prepared to endanger American lives for political gain.

On Saturday, President Trump tweeted that the US Food and Drug Administration (FDA) “is making it very difficult for drug companies to get people in order to test the vaccines”.

The Financial Times reported the Trump administration was exploring granting emergency use authorisation (EUA) to a vaccine currently under development by the University of Oxford and drug manufacturer AstraZeneca.

Some 10,000 people have volunteered for trials of the drug, but US agencies require trials involving 30,000 people for a vaccine to be authorised.

The week when everything changed for Trump
Does the US have the worst coronavirus death rate?

The US has suffered more confirmed cases and deaths from the coronavirus than any other country. According to Johns Hopkins University, it has recorded more than 5.7 million infections and over 177,000 deaths so far.

What did Dr Fauci say?

In an interview with Reuters, Dr Fauci – head of the National Institute of Allergy and Infectious Diseases – warned rushing out an untested vaccine could damage other trials.

“The one thing that you would not want to see with a vaccine is getting an EUA before you have a signal of efficacy,” he said.

“One of the potential dangers if you prematurely let a vaccine out is that it would make it difficult, if not impossible, for the other vaccines to enrol people in their trial.”

“To me, it’s absolutely paramount that you definitively show that a vaccine is safe and effective,” he added.

The Oxford vaccine is one of dozens currently under development around the world. Major pharmaceutical companies have launched huge trials to test the effectiveness of their drugs in recent weeks.

Previously the FDA issued an EUA for the drug hydroxychloroquine to treat the virus. But in July officials withdrew the EUA, saying clinical studies suggested the anti-malaria drug was ineffective in treating the deadly virus and failed to prevent infection among those exposed to it.

Mr Trump has touted the benefits of the medicine, directly contradicting the advice of his medical experts.

Don't Miss it Coronavirus latest: German outlook brightens while contraction less severe than first feared
Up Next COVID-19 Is Transmitted Through Aerosols. We Have Enough Evidence, Now It Is Time to Act