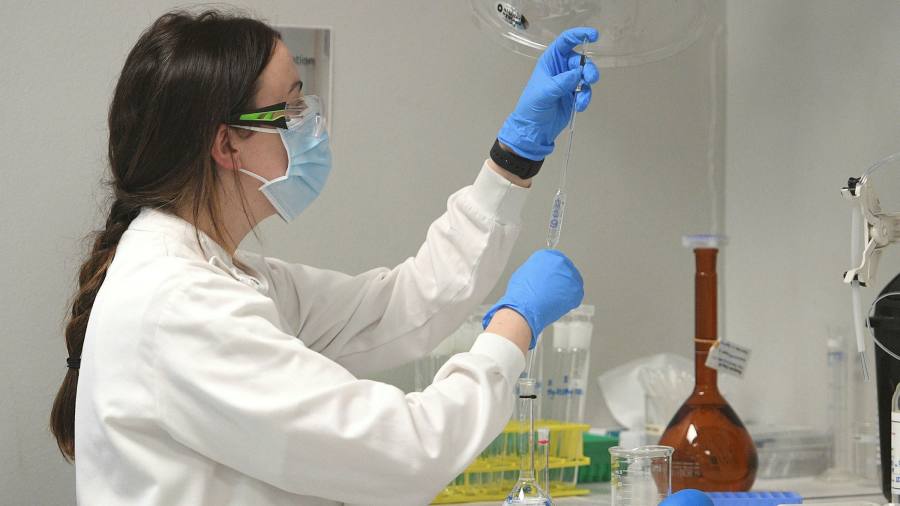 The Trump administration is considering bypassing normal US regulatory standards to fast-track an experimental coronavirus vaccine from the UK for use in America ahead of the presidential election, according to three people briefed on the plan.

One option being explored to speed up the availability of a vaccine would involve the US Food and Drug Administration awarding “emergency use authorisation” (EUA) in October to a vaccine being developed in a partnership between AstraZeneca and Oxford university, based on the results from a relatively small UK study if it is successful, the people said.

The AstraZeneca study has enrolled 10,000 volunteers, whereas the US government’s scientific agencies have said that a vaccine would need to be studied in 30,000 people to pass the threshold for authorisation. AstraZeneca is also conducting a larger study with 30,000 volunteers, although the results from that will come after the smaller trial.

Making a vaccine available before the election could allow US president Donald Trump to claim he has turned the tide on a virus that has killed more than 170,000 Americans following widespread criticism of his handling of the pandemic. In his convention speech on Thursday night, Joe Biden, Mr Trump’s Democratic opponent, said that the US response to the virus was the “worst performance of any nation”.

However, if the Trump administration does rush through emergency authorisation ahead of the election by skirting normal government guidelines, it could dent already shaky public confidence in the safety of vaccines ahead of one of the largest mass-immunisation programmes in US history.

Mark Meadows, White House chief of staff, and Steven Mnuchin, Treasury secretary, have told top Democrats that the administration was considering fast-tracking a vaccine, according to one person briefed on a July 30 meeting the pair held with Nancy Pelosi, the Democratic Speaker of the House of Representatives.

Mr Meadows said in the meeting that there could be emergency authorisation, possibly for the AstraZeneca vaccine, in September. Mr Mnuchin added that the administration expected an EUA for a vaccine before full approval, said the person, who added that Ms Pelosi warned that there should be “no cutting corners” in the vaccine approval process.

The meeting, which included top Senate Democrat Chuck Schumer, was one of many meetings that the group held about the next Covid-19 relief package.

A spokesperson for the Treasury secretary said: “Secretary Mnuchin did not make any comments regarding AstraZeneca, nor is he familiar with the specifics of the AstraZeneca vaccine candidate. He is also not aware of any plans the FDA may have regarding any emergency use authorisation for any potential vaccine, beyond what he has heard publicly stated.

“The secretary believes, and has always believed, that any decision on vaccine candidates and any possible EUA is up to the FDA.”

The FDA on Sunday separately issued an EUA for using convalescent plasma for the treatment of coronavirus in hospital patients, in what the White House said was a “major therapeutic breakthrough”.

“This is what I’ve been looking to do for a long time. This is a great thing,” Mr Trump said at a brief news conference announcing the development.

Mr Trump did not address the issue of a vaccine EUA. But he said he would be talking about vaccine developments in the near term, as he applauded the speed at which his team was acting to tackle Covid-19, which has now claimed the lives of more than 176,000 Americans.

“We’re years ahead of approvals than we would be if we went by the speed levels of past administrations. We would be two years, three years behind,” he said. “That includes vaccines that you’ll be hearing about very soon.”

If the FDA granted emergency approval to the AstraZeneca vaccine based on the Oxford study, it could provoke a string of resignations from the agency.

Earlier this week Peter Marks, director of the FDA’s Center for Biologics Evaluation and Research — which is responsible for assessing the vaccines — told Reuters that he would resign if the agency were to approve a jab before definitive data showing it was safe and effective.

“I could not stand by and see something that was unsafe or ineffective that was being put through,” Dr Marks said. “You have to decide where your red line is, and that’s my red line.

“I would feel obliged [to resign] because in doing so, I would indicate to the American public that there’s something wrong.”

Michael Caputo, a spokesperson for the US health and human services department — which contains the FDA — said any claim that the administration would issue an EUA before the election was “absolutely false”.

Mr Caputo said the administration was hopeful that a vaccine would be developed by the first quarter of 2021. “We have always been working towards that goal. I’ve never been told at any point in time that goal has changed,” he said. “Talk of an October surprise is a lurid resistance fantasy. Irresponsible talk of an unsafe or ineffective vaccine being approved for public use is designed to undermine the president’s coronavirus response.”

On Saturday, Mr Trump lashed out at the FDA in a tweet that appeared to accuse the agency of slowing down enrolment in coronavirus vaccine and drug trials to delay the results of studies until after the election.

“The deep state, or whoever, over at the FDA is making it very difficult for drug companies to get people in order to test the vaccines and therapeutics,” Mr Trump wrote in a tweet that tagged Dr Stephen Hahn, FDA commissioner. “Obviously, they are hoping to delay the answer until after November 3rd. Must focus on speed, and saving lives!”

Ms Pelosi hit back at Mr Trump in a press conference on Saturday.

“The FDA has a responsibility to approve drugs, judging on their safety and their efficacy, not by a declaration from the White House about speed and politicising the FDA,” she said.

Although we have talked about doing this at ‘warp speed’, it is not through any cuts in our efforts for vaccine safety or scientific integrity

“This was a very dangerous statement on the part of the president. Even for him, it went beyond the pale in terms of how he would jeopardise the health and wellbeing of the American people.”

Two of the people briefed on the plans said that the relatively small UK trial was not designed to produce sufficient data of the kind that would be required for emergency authorisation in the US. US drugmakers Moderna and Pfizer, which are also trialling vaccines, both plan to enrol 30,000 participants in Phase III studies they started in July. Moderna said it would complete enrolment by the end of September, while Pfizer has said it has already enrolled 11,000.

One of the people briefed on the plan said: “I don’t see a way forward for [AstraZeneca],” based on the 10,000-person trial. “They’re not going to get there. They won’t have the clinical end points.”

The person predicted that if Dr Marks were to quit, other scientists in his division of the FDA would follow suit.

A spokesperson for AstraZeneca said it had “not discussed emergency use authorisation with the US government” and that it “would be premature to speculate on that possibility”.

Dr Hahn faced criticism earlier this year after the FDA granted emergency approval for hydroxychloroquine — an unproven drug repeatedly touted by Mr Trump — before reversing its decision when multiple studies showed the drug was not an effective treatment for coronavirus.

Public health officials in the US have repeatedly stressed the importance of following normal processes when approving a Covid-19 vaccine.

In June Francis Collins, director of the National Institutes of Health, told CNN: “Each vaccine needs to be tested on about 30,000 volunteers. We don’t believe that we have enough power in the analysis, to be able to document the vaccine works unless you get to roughly that number.”

Robert Redfield, head of the Centers for Disease Control and Infection, told the FT on Friday: “Although we have talked about doing this at ‘warp speed’, it is not through any cuts in our efforts for vaccine safety or scientific integrity.”

One person working on the US effort to find a vaccine said the Trump administration’s exploration of ways to circumvent normal procedures had prompted infighting among the government’s top scientists.

Anthony Fauci, head of the National Institute of Allergy and Infectious Diseases, and Dr Collins are stressing the importance of scientific rigour whereas Moncef Slaoui, the White House’s vaccine tsar, wants to forge ahead, the person said.

In an interview conducted after publication of the FT’s original story, Dr Fauci said it was “not the case” that Dr Slaoui was taking a less scientifically rigorously approach. “I can tell you, dealing with him, he is straight with the science,” he said.

Dr Collins also said it was “absolutely not true” that there was a divergence of approach. “The three of us are completely in accord about all the steps that have to be conducted and how rigorous they need to be,” he said.

In a separate interview, Dr Slaoui said the three men were on the same page. He said there was “no misalignment on the science” and that any claim to the contrary “undermines the trust that the population can have in the vaccines”.

Asked if the UK study could be used to justify issuing an EUA in the US, Dr Fauci said it was impossible to say without seeing the data. “You have to see the data, the devil is in the details,” he said.

Dr Slaoui said it was possible that it could be used to make an EUA determination, but said he had also not seen the data.

“The UK study, which is run in the UK, Brazil and in South Africa is designed to accrue a number of cases. The exact statistics . . . I don’t know because it’s a study run by Oxford university. But as it generates data, it may, absolutely,” Dr Slaoui said.

Video: Coronavirus: the global race for a vaccine | FT Interview

Don't Miss it Maine coronavirus: Woman linked to wedding reception outbreak has died
Up Next Manitoba Hutterites encouraged to ‘respond with grace’ as concerns over coronavirus stigma continue – Winnipeg