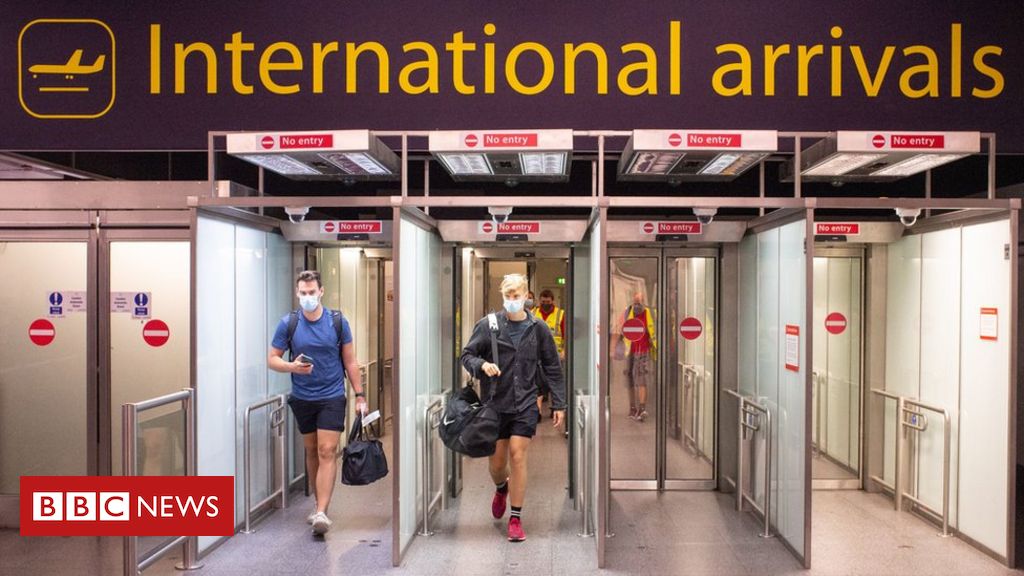 Passenger numbers have fallen by 80% this summer

Gatwick Airport has revealed plans to cut a quarter of its workforce due to the impact of coronavirus.

About 600 jobs could be lost following an 80% reduction in the number of passengers.

The airport is running at about 20% its usual capacity for August, with only the North Terminal open.

Chief Executive Stewart Wingate said the cuts were a result of the “devastating impacts” coronavirus had on the airline and travel industries.

In March, the airport announced 200 jobs would be lost and it later took out a £300m bank loan. With the collapse in passenger numbers, the company said it was looking to further reduce costs.

About 75% of staff are currently on the government’s furlough scheme, which is due to end in October.

Employees will be formally consulted on the restructuring plans before any jobs are lost.

Regional manager of the union Unite, Jamie Major, said 600 jobs amounted to roughly a quarter of the workforce directly employed at Gatwick.

He said: “This is a bitter blow for the workers and once again highlights the chronic failure of the government to support the aviation sector, despite promises way back in March that it would do so.

“Unite will be entering into formal negotiations with Gatwick Airport to ensure that redundancies are minimised and that all redundancy procedures are fair and fully transparent.”

He said the workforce had been left reeling and the scale of job losses was having a devastating effect on the local community and economy.

The airport is a major employer in Crawley

The company, which is owned by VINCI Airports and Global Infrastructure Partners, was talking to the government about support for the aviation industry and a new system to give passengers “greater certainty on where and when they can safely travel abroad,” Mr Wingate said.

Airport bosses said: “The proposed organisation redesign will reshape the company so it is best placed to respond quickly to future growth.”

Gatwick’s announcement follows the news that British Airways will make hundreds of job cuts at the airport in West Sussex.

Crawley council leader Peter Lamb said support was needed to stop the decline of the aviation industry – a major employer in the town.

He called on the government to continue the furlough scheme for industries which are affected by ongoing coronavirus restrictions.

Thousands of job losses had already been announced at the airport, with many more to come “unless the government provides us with the targeted deal for aviation we have repeatedly requested”.

A large number of redundancies at the airport would have a knock-on effect for any local business that “relies upon consumer spending,” he warned.

“We are talking about a generation of the town’s young people having their economic future devastated,” he added.

A Department for Transport spokesman said: “We understand this will be distressing news for Gatwick Airport’s employees and their families, and we will do everything we can to support them at this difficult time.

“If people need financial support quickly they may be able to claim Universal Credit and new style Jobseekers Allowance.

“The government recognises the impact that the coronavirus is having on the economy and workers, and we have put together an extensive package of financial support.”

The government also said it had supported the aerospace and aviation sectors with over £8.5 billion in grants, loans and export guarantees.

Don't Miss it Spain reports over 3,500 coronavirus cases in a day: Live news | News
Up Next Australia pushed for a WHO probe into coronavirus’ origins — here’s what the investigation is up to