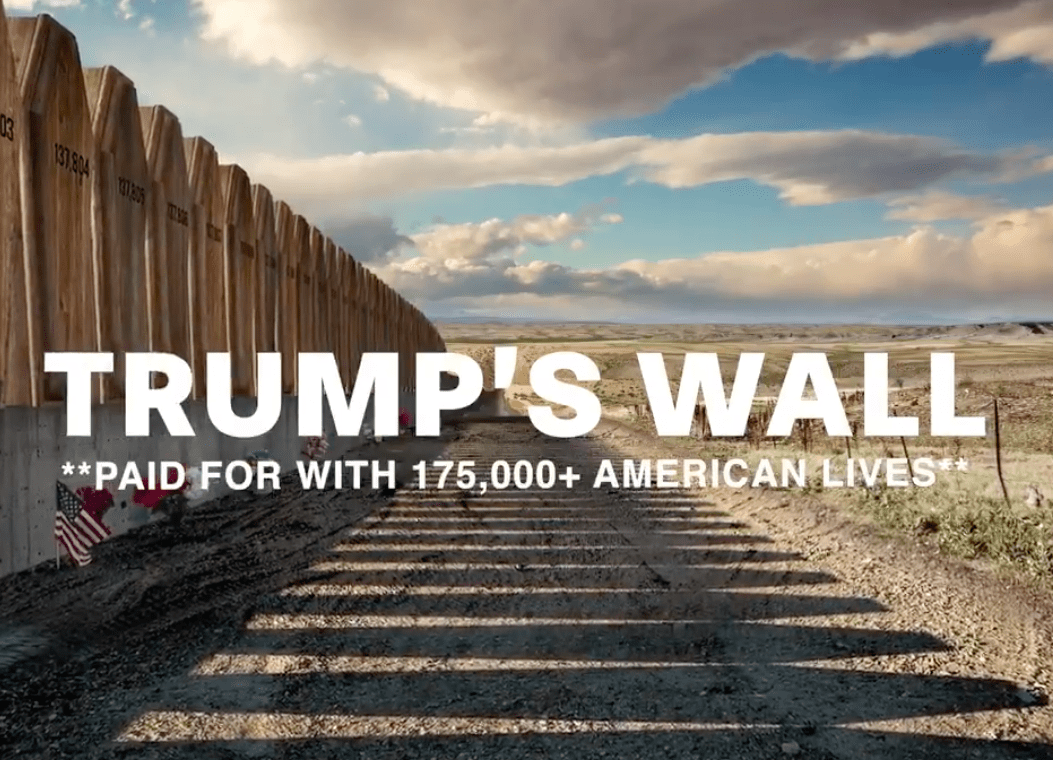 As the Republican Party gathered for the second night of this year’s convention, anti-Trump campaign group the Lincoln Project broadcast an ad calling the coronavirus death toll “Trump’s wall”.

Over drone footage of a fence in the south-western desert, the video states plainly that “More than 175,000 Americans are dead. Friends & colleagues. Sisters, brothers, mothers & fathers.”

Pointing out that their bodies laid end-to-end would span 2,673 football fields, the ad then cuts to ground level, with the words “Trump is building his wall” superimposed over a parade of side-by-side gravestones.

The video is an updated version of a spot that debuted earlier this summer under the title “Trump’s Wall of Death”. It was deployed as part of a multi-million dollar advertising blitz designed to undermine and troll the Republican convention, with digital and TV slots purchased to target voters in key swing states.

Already this week, the group has dropped a new minute-long ad calling the president’s son-in-law Jared Kushner “evil”. “Evil is real,” the ad’s voiceover intones. “We ignore it when it seems educated, police, superficially charming, even sophisticated.”

Claiming that Mr Trump and Mr Kushner deliberately funnelled pandemic response efforts away from blue states, the ad concludes: “Some people say Trump and Kushner were incompetent when it came to Covid, but let’s call it what it is: evil”.

In a statement describing the group’s convention strategy, the Lincoln Project’s Reed Galen said: “While Trump spends the week obsessing over RNC coverage, many Americans will be planning funerals, saying virtual ‘last goodbyes’ to sick loved ones, and worrying whether or not they’ll catch Covid at work. It’s reprehensible, and we won’t let him pretend this isn’t happening.”

The Republican convention has so far seen little acknowledgement of the coronavirus death toll. To the extent the pandemic has featured, the emphasis is squarely on rebuilding the country after the ensuing economic crash. An exception was Tuesday night’s speech by Melania Trump, who told the hundreds of thousands who have lost loved ones that “you’re not alone”.

Along with the “wall of death” ad, the organisation on Tuesday leaked the text of various of the night’s speeches before they were delivered using the hashtag #LincolnLeaks, sharing addresses by Tiffany Trump, senator Rand Paul and secretary of state Mike Pompeo, among others.

The group’s Twitter account, meanwhile, kept up a steady stream of caustic responses to the night’s business, before giving way to an online video discussion of what had unfolded.

“If you survived watching that,” it said, “join us LIVE for the Lincoln Project RNC postgame.”

Don't Miss it Coronavirus: Face coverings U-turn for England’s secondary schools
Up Next Melania Trump took a different approach to coronavirus in her speech, but cancel culture still got the spotlight on day two of the RNC