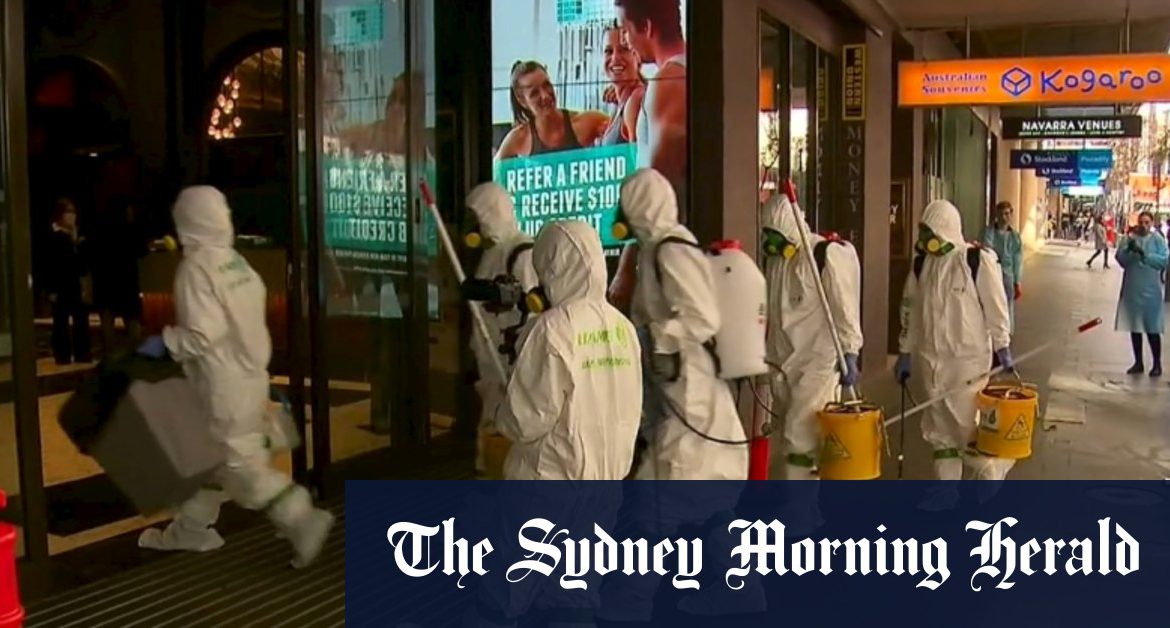 Other members of the club who were at the venue during those dates should get tested if they develop symptoms.

On Wednesday, Chief Health Officer Dr Kerry Chant urged anyone who was at 300 George Street on August 19, 20, 21 or 24 to be on high alert for symptoms after one of the cases worked there while infectious.

Workers go into the City Tattersalls gym to deep-clean it.Credit:Nine

NSW Health is also contacting everyone known to have attended the Hunters Hill Bowling Club indoor dining room on August 23 from midday to 2pm.

They are considered close contacts of cases and must immediately get tested, self-isolate for 14 days, even if the test is negative, and get retested if symptoms occur.

People who attended other areas of the club are considered casual contacts and must monitor for symptoms and get tested if any develop.

One of the cases detected this week is a parent of a student at Villa Maria Catholic Primary School in Hunters Hill.

Other members of the family have been tested and returned negative results, including the children enrolled at the school. The family are self-isolating for 14 days.

In an email to parents on Thursday, principal Kevin Turner said no students had tested positive and children who were isolating did so as a precautionary measure.

The children will be tested again and must return a negative result before returning to school.

David Jones food court in Elizabeth Street in the Sydney CBD was closed on Thursday after a staff member was identified as one of the new COVID-19 cases.

The staff member last worked at the food court on Tuesday, a David Jones spokesperson said in a statement.

“A deep clean of the store has been completed and contact tracing [was] undertaken in accordance with all health authority guidelines,” the statement read.

Confirmed cases attended a number of other venues, and anyone who visited the following locations during these times must also monitor for symptoms and get tested if any develop:

NSW Health is calling all close contacts at the gyms to direct them to self-isolate and get tested.

On Wednesday, a NSW Health spokesperson said one of the cases linked to the City Tattersalls club visited the Royal Hospital for Women in Randwick, including the hospital’s Windscreens Cafe on Tuesday morning.

The person developed symptoms later in the day and sought a COVID-19 test. The hospital screens all staff and visitors, and was working to identify all contacts of that person, the spokesperson said.

There is also an alert after a case went to the Active Dance Class at the Virgin gym in Zetland at 7.40pm on August 24.

Anyone who attended the class is being considered a close contact by NSW Health, and must get tested and isolate at home for 14 days regardless of symptoms or test results.

Others who were at that gym between 7.30pm and 10pm should get tested even if they have mild symptoms, the health spokeswoman said.

NSW Health is treating 74 COVID-19 cases, including six in intensive care, four of whom are on ventilators. Roughly 85 per cent of cases being treated by NSW Health are in non-acute, out-of-hospital care.

Victoria recorded 113 new cases on Thursday, the lowest total since July 5, alongside 23 deaths, a near-record daily death toll. The number of people who have died in Victoria from coronavirus has increased to 485.

Don't Miss it Over 75,000 COVID-19 Cases In Biggest One-Day Rise In India
Up Next Coronavirus pandemic hits renters and landlords amid mass job losses | ABC News