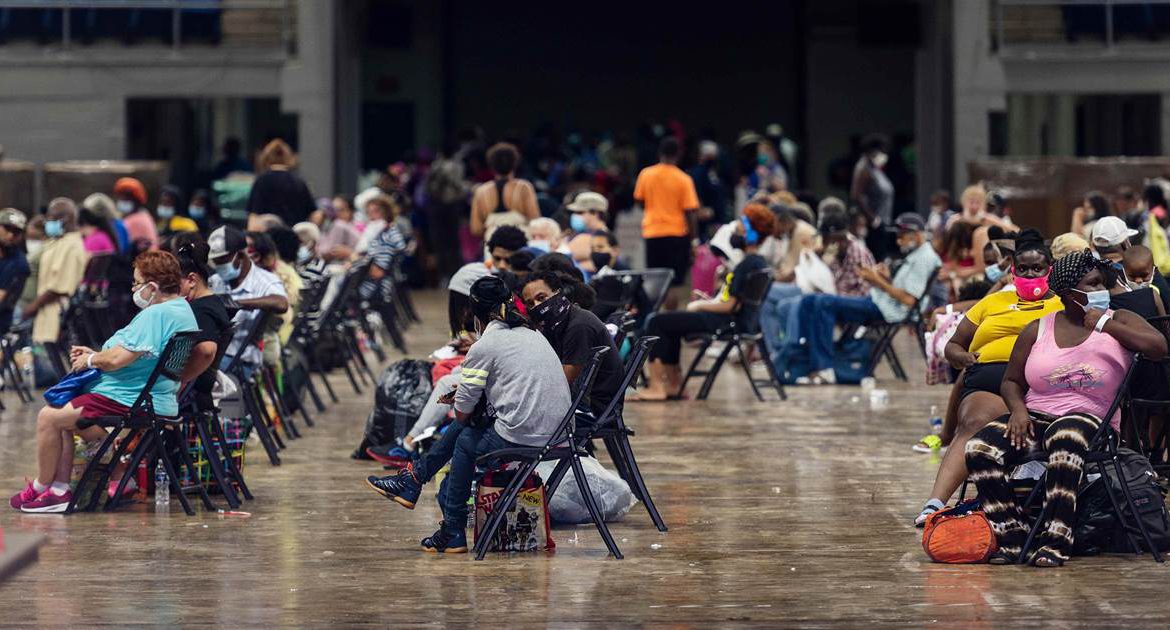 Texas and Louisiana were still struggling to contain the pandemic as Hurricane Laura bore down on them, and now officials fear a new wave of COVID-19 infections will come in the wake of the massive storm.

But it will take time before they know for sure.

“We’re basically going to be blind for this week because we’ll have to discontinue much of our community-based testing,” Louisiana Gov. John Bel Edwards said before the hurricane made landfall Thursday along the border of his state and Texas.

Edwards, who is a Democrat, said the state took pre-emptive measures to prevent the virus from spreading by placing storm refugees in hotels and motels rather than in crowded shelters.

“We’ve got fewer people in the hospital with COVID now then we’ve had in the last couple of months, but we’ve had the most cases per capita in the country,” Edwards told MSNBC’s Stephanie Ruhle on Thursday. “We have significant community spread, and we are very mindful that this storm is gonna complicate our efforts to get the virus under control.”

“Remember: Just because a hurricane is coming to Texas, does not mean COVID-19 either has or is going to leave Texas,” he said at a news conference Tuesday. “COVID-19 is going to be in Texas throughout the course of the hurricane.”

Laura made landfall not long after Vice President Mike Pence defended the much-criticized pandemic performance of the Trump administration at the Republican National Convention.

Darrell Pile, CEO of the Southeast Texas Regional Advisory Council, which coordinates emergency medical response in a 25-county region along the state’s coast, said it will be up to Texans to make sure the pandemic doesn’t spread.

“Social distancing will be much more difficult for people who are evacuating,” Pile told NBC News on Wednesday. “However, they can wear a mask. And they can do their best to minimize being too close to other people.”

Before Laura arrived, scientists at Columbia University and the Union of Concerned Scientists warned that a large-scale hurricane evacuation could increase the chances of spreading the pandemic.

“Many of the country’s most hurricane-prone states have recently experienced some of the highest COVID-19 growth rates in the nation,” Kristy Dahl, a senior climate scientist at the Union of Concerned Scientists and one of the co-authors of the study, warned. “In every scenario we analyzed, hurricane evacuations cause an increase in the number of COVID-19 cases.”

Southern and Sun Belt states like Texas, Florida and Arizona experienced an explosion of new cases and deaths after they began reopening in May at the urging of President Donald Trump, over the objection of many public health experts and just as the pandemic was picking up steam in those areas.

Louisiana was slower to reopen, but it too saw a spike in new cases and deaths and currently has the highest number of confirmed cases per capita in the country with more than 145,000, according to the latest NBC News figures. It has also recorded 4,851 deaths.

Still, the number of new cases in Louisiana had declined measurably in the last two weeks after Edward shut down bars and imposed measures like a statewide mask mandate that many in the mostly conservative state objected to.

Texas had recorded 91,734 new COVID-19 cases and 2,779 deaths in just the last two weeks, the NBC News numbers show. And while it appears the state’s cases have plateaued as well, Texas was fourth in the nation with nearly 12,000 deaths and second only to California in total number of cases with 612,632 as of Thursday morning.

As of Thursday, the death toll in the United States was over 180,000 and the number of confirmed cases was fast approaching 6 million, NBC News figures show. Both numbers lead the world.

In other coronavirus news:

Weekly initial jobless claims remained over a million for a second week in a row, the Department of Labor reported Thursday, providing fresh evidence that the economy was still struggling to recover from the worst downturn since the Great Depression. Coming on the final day of the RNC, it was more bad news for Trump to contend with. “Overall, the economy has lost almost 6 million jobs since Trump took office, compared to an over 11 million increase in jobs during the same period in President Barack Obama’s last term,” NBC News reported.The controversial decision to change the federal Centers for Disease Control and Prevention guidelines on COVID-19 testing was made last week while Dr. Anthony Fauci, the nation’s leading infectious disease expert, was undergoing surgery. “At the time he was not struck by the potential implications of this particular change in the version he reviewed,” a spokesperson for the National Institute of Allergy and Infectious Disease, which Fauci leads, said. Since then, though, the White House has been accused of deliberately trying to fudge the numbers. The CDC had been advising testing for all who showed COVID-19 symptoms or who had been in contact with infected people. But on Monday, the agency amended its guidelines to say that healthy people who had been exposed to COVID-19 “do not necessarily need a test” as long as they don’t have symptoms. After an outcry, CDC chief Dr. Robert Redfield appeared to backtrack Wednesday, declaring that “all close contacts of confirmed or probable COVID-19 patients” may consider testing. Trump has complained repeatedly that the only reason the U.S. leads the world in COVID-19 cases is because it does the most testing, a claim public health experts overwhelmingly reject.The Department of Justice was being accused of embarking on a politically motivated investigation after it sent letters to four states led by Democratic governors seeking data on whether they violated federal law by ordering public nursing homes to accept recovering COVID-19 patients from hospitals. The letters sent to New York, New Jersey, Pennsylvania and Michigan were aimed at determining whether the orders “may have resulted in the deaths of thousands of elderly nursing home residents,” the DOJ said. The recipients of those letters said the DOJ was trying to distract from the failures of the Trump administration to curtail the pandemic. “Americans would all be better served if the Trump administration stopped the partisan games and focused on delivering a real plan to defeat COVID-19,” Tiffany Brown, a spokeswoman for Michigan Gov. Gretchen Whitmer, said. The governors’ move came early on in the pandemic when there was widespread fear hospitals would run out of beds and conflicting information on how the virus is spread. Nursing home operators and relatives said they were putting the most vulnerable people at risk of infection. New York Gov. Andrew Cuomo, whose state has since flattened the coronavirus curve but still leads the country with 33,744 reported COVID-19 fatalities, and the other governors reversed course after the death toll started climbing.

A second “stay-at-home, work-from-home” order went into effect early Thursday in Hawaii as the number of COVID-19 cases in the state doubled in the last four weeks. The new shutdown is limited to Oahu, the most populous island. While the total numbers of cases (7,236) and deaths (51) are small compared to hard-hit states like Florida or California, Hawaii is uniquely vulnerable during a pandemic, Catherine Pirkle, a University of Hawaii at Manoa public health professor, told NBC News. “We are an extremely expensive place to live and salaries in no way keep pace with the cost of living,” Pirkle said. “This means that many households contain multiple generations because expenses must be shared. Crowding is not uncommon, especially for our poorest households. This makes social distancing impossible and can lead rapidly to clusters of infected individuals.” Also, said Pirkle, while Hawaii has top-notch hospitals “the distance between us and other states makes it harder for us to get reinforcements. It also makes it expensive for us to get supplies and equipment.” Gov. David Ige announced earlier this week that they are boosting testing with kits from the federal government and they have booked an entire hotel where people who live in crowded households and tested positive will be quarantined.

Joe Murphy is a data editor at NBC News Digital.