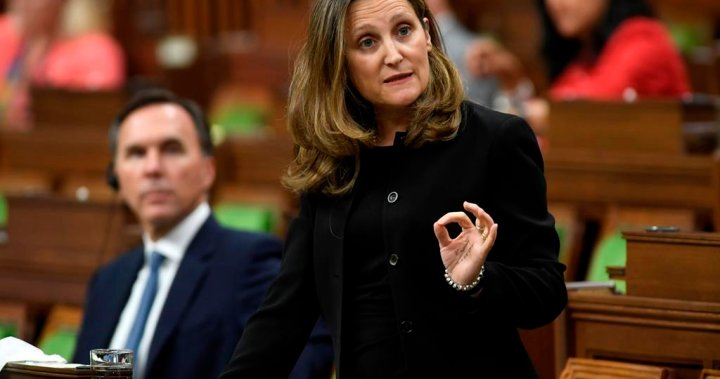 OTTAWA — A major global credit rating agency is issuing a new warning about federal debt that it says may become more difficult to tackle once the pandemic passes.

Fitch Ratings downgraded Canada’s triple-A credit rating in June, dropping the country to an “AA+” rating over what it called “the deterioration of Canada’s public finances” due to COVID-19.

The decision came out before the Liberals released an updated outlook in early July for federal spending, which projected a deficit of $343.2 billion and a debt of over $1.2 trillion.

Those figures were before the Liberals promised last week to spend $37 billion to revamp income support programs for hard-hit workers.

Fitch says in a note that gross government debt will be 120 per cent of economic output, which is “significantly higher” than the median for a double-A rating.

The ratings agency says it expects government spending to drop sharply starting in 2021, but the current growing deficit will make reining in spending and the debt more challenging over the medium-term.

But it is also sending a signal about the political dynamics on Parliament Hill, with a looming speech from the throne that will outline a recovery plan that will require the Liberals to gain support from enough opposition MPs to win a confidence vote, or plunge the party into a federal campaign.

“Regardless of which party is in power after 2020, the government faces deep fiscal and economic policy challenges and risks,” the Fitch note says.

The government has had to sharply ramp up spending since March when the pandemic swept into Canada, forcing the closure of businesses and workers ordered to stay home to slow the spread of COVID-19.

Those restrictions have since been rolled back, and economic output grew in May as a result.

On Friday, Statistics Canada will release gross domestic product readings for June and the second quarter of 2020. The average economist estimate is for a drop of nearly 40 per cent in GDP for the second quarter compared to the same three-month stretch in 2019, according to financial data firm Refinitiv.

Fitch expects the economy to remain subdued and unemployment to remain high for the rest of the year, just as the federal government projected in its July economic snapshot.

Since then, some of the key political players have changed. Bill Morneau resigned as finance minister and was replaced by Chrystia Freeland, “who quickly announced the new spending measures,” Fitch wrote.

The Liberals are proposing three new benefits for workers costing $22 billion, to help those who don’t qualify for employment insurance, and easing access to EI at a cost of $7 billion.

The Canada Emergency Response Benefit, previously budgeted at around $80 billion, will be extended by four weeks at a cost of $8 billion. The latest federal figures show spending on the CERB surpassed $70 billion by the middle of this month.

New spending measures are expected this fall when the government updates spending plans. The Liberals have yet to introduce a budget for the fiscal year.

“Failure to place consolidated gross general government debt/GDP on a downward path over the medium-term could lead to negative rating action.”