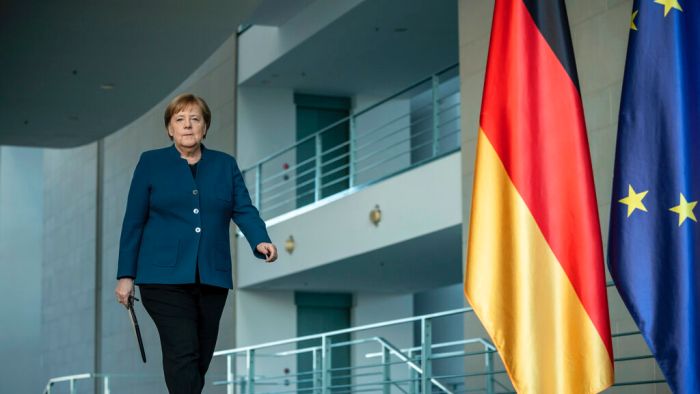 German Chancellor Angela Merkel has warned that the coronavirus pandemic could worsen in coming months, and that life will not return to normal until a vaccine against it had been developed.

Meanwhile, Britain’s Government has urged people to return to their offices and workplaces to help the economy recover from the pandemic.

German Chancellor Angela Merkel has warned the coronavirus pandemic could worsen in coming months, and that life will not return to normal until a vaccine has been developed.

Western Europe’s longest serving leader also called on the world to accelerate the fight against global warming, and for Germany and Europe to maintain dialogue with other major powers through difficult times while beating the drum for democracy.

But as Ms Merkel makes preparations to step down before the next national election in October 2021, she made clear that she expects the pandemic to define her last year in office.

Urging citizens not to drop their guard against the virus as Germany’s daily infection rate rises, she told a news conference: “This is a serious matter, as serious as it’s ever been, and you need to carry on taking it seriously.”

Ms Merkel says further contracts for COVID-19 vaccines were “in the works” between drug companies and the EU.(Reuters: Andreas Gebert)

Even though Germany would not fully repay debt incurred to fund relief measures offsetting the impact of COVID-19 until 2058, such stimulus was essential as the economy could not be allowed to grind to a halt, she said.

Her Government would also work to foster social cohesion in the face of the pandemic, focusing on protecting children and other vulnerable groups, such as the elderly and low-income families, from its effects.

Meanwhile, she said further contracts for COVID-19 vaccines were “in the works” between drug companies and the European Union, whose rotating presidency Germany holds until December.

Spain cracks down on pandemic-denier for inciting hatred

Spanish police arrested a man near the north-eastern city of Zaragoza, who believed the coronavirus pandemic to be a hoax, for inciting hatred and violence by using several anonymous social-media profiles.

The 38-year-old, who claimed that health professionals and the media were behind what he called the “COVID farce”, urged his followers to attack politicians and journalists, police said.

“All this would be solved with a shot to the back of [Spanish Prime Minister] Pedro Sanchez’s head,” he wrote on one of his social media accounts.

In other posts he said the headquarters of Spain’s doctors’ union should be burned down and described those who believed in the virus as bad and ignorant people who deserved to die, according to the police.

Passing himself off as a government official, police said the suspect allegedly made calls to nursing homes, hospitals and football clubs to spread false information about the pandemic.

Police were able to trace the man, described as a “grave danger” to public health, to a location just outside Zaragoza, the regional capital of Aragon.

On Thursday, Spain reported, 3,781 new cases, bringing the cumulative total to 429,507 — the highest in western Europe.

During the epidemic’s peak, Spain imposed one of Europe’s strictest lockdowns and introduced stringent mask-wearing rules when it was lifted at the end of June.

Britain’s Government has urged people to return to their offices and workplaces to help the economy recover from the COVID-19 pandemic, transport minister Grant Shapps has said.

“Our central message is pretty straightforward: we are saying to people it is now safe to return to work,” he told LBC radio.

Prime Minister Boris Johnson will launch a campaign extolling the virtues of returning to the office while a new online tool will help people avoid the most crowded trains and buses, a report in The Telegraph newspaper said.

It is expected that UK Prime Minister Boris Johnson’s Government will give a thumbs up to reopening the economy.(AP: Dominic Lipinski)

According to the Centre for Cities think tank, only 17 per cent of workers in British cities had returned to their workplaces by early August.

Last month Mr Johnson encouraged people working from home to get back to their workplaces to help the economy recover from its 20 per cent contraction in the April-June period, the largest fall among big developed economies.

But many other business leaders and economists think the move is premature, and that it would be counterproductive to resist much of the shift towards working from home.

The South Korean Government has ramped up efforts to end a strike by thousands of the country’s doctors, as Seoul took the unprecedented step of restricting eateries in the capital in a bid to blunt a surge in coronavirus cases.

The Health Ministry extended a back-to-work order for doctors to the entire country and filed a complaint with police against at least ten doctors it said have not abided by an order that has been in place in Seoul since Wednesday (local time).

But the Korea Medical Association said it plans to organise a nationwide strike starting September 7, for an indefinite period, unless the Government drops its reforms.

The escalation in the dispute comes as South Korean officials tackle a fresh wave of COVID-19 infections.

Officials reported 371 new infections as of midnight Thursday, bringing the total to 19,077, including 316 deaths.