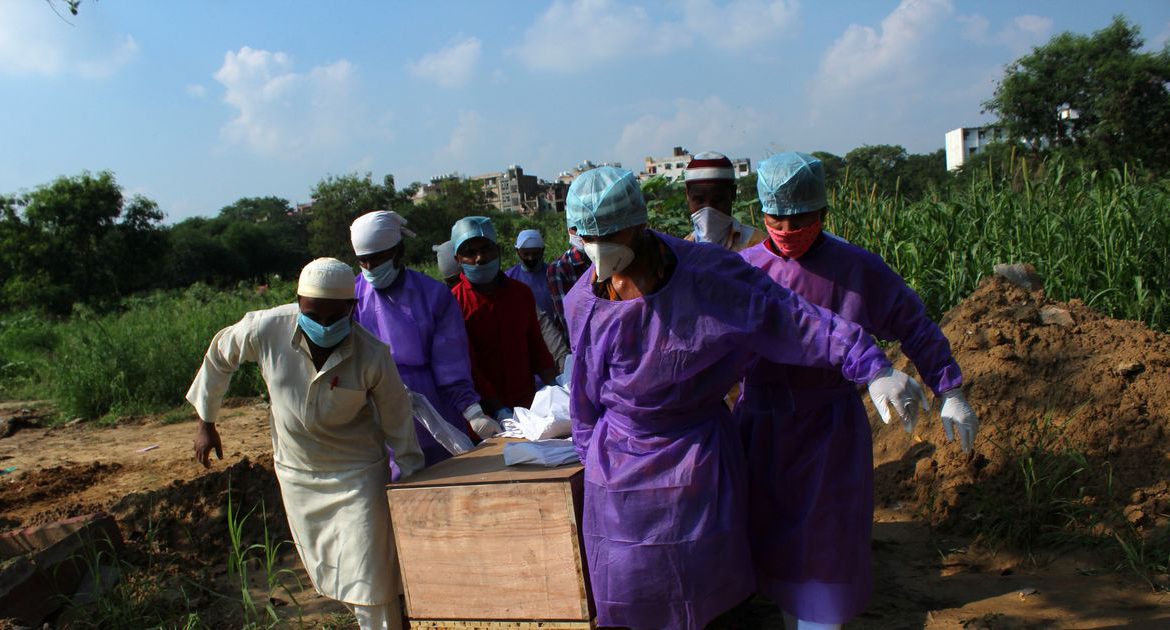 The number of coronavirus cases worldwide has surged past 25 million amid fears a second wave has hit Europe.

The latest figures come as India marked a worldwide record for daily new cases in the Covid-19 pandemic.

India’s single-day tally of 78,761 new coronavirus infections on Sunday exceeded the one-day increase of 77,299 reported by the United States in mid-July.

Family members bury a person who died of coronavirus in India, which has seen a huge surge in cases
(Image: NurPhoto/PA Images)

Around the world, there have been more than 840,000 deaths, considered a lagging indicator given the two-week incubation period of the virus.

India, the world’s second-most populous country, is third behind, the United States and Brazil, in total caseload, but has consistently outpaced both in new daily cases since August 7, according to a Reuters tally.

More than 840,000 have died from coronavirus
(Image: Anadolu Agency via Getty Images)

Despite the surging case numbers, Prime Minister Narendra Modi has been pushing for a return to normalcy to lessen the economic pain of the pandemic, having imposed a strict early lockdown of the country’s 1.3 billion people in March.

The government announced on Saturday that it will reopen underground train networks – a lifeline for millions in the capital city of New Delhi – and allow sports and religious events in a limited manner from next month.

Latin America is the region with the most infections in the world, although some countries in the region are beginning to show a slight decline in infections.

There are fears a second wave has hit Europe
(Image: AFP via Getty Images)

In the United States, metrics on new cases, deaths, hospitalizations and test positivity rates are all declining, but there are emerging hotspots in the Midwest.

The latest figures come amid fears that a second wave of coronavirus has hit Europe.

Some countries are reporting a spike in infections as many reopen to tourists to get the economy going again.

According to the head of Germany’s doctors’ union, the country is already experiencing a second wave of the deadly pandemic as people fail to follow social distancing rules.

Destinations such as  Spain, Greece and Italy, who opened their borders to tourists, are also fearing a second wave.

Saturday saw another 12 coronavirus deaths in the UK reported, taking the total to 41,498. A further 1,108 people also tested positive for Covid-19.

The latest figures were announced after Health Secretary Matt Hancock warned that a second wave of coronavirus in England this winter could lead to nationwide lockdown restrictions.

Mr Hancock said restrictions may not be eased over Christmas to avoid an increased in the number of infections, and the reopening of schools next week presents new challenges in stopping the spread of the virus.

A recent report by the government’s scientific advisers has warned there could be up to 81,000 excess deaths directly attributed to Covid-19 between July and next March in a worst-case scenario.

Mr Hancock said a second wave could be “avoidable but it’s not easy”, with schools reopening next week presenting new challenges in stopping the spread of the virus.

BBC’s  Newsnight  reported that a “reasonable worst-case planning assumption” presented to the Government warned there could be up to 81,000 excess deaths directly attributed to Covid-19 between July and next March.

The broadcaster said the scenario was laid out in a document signed off by the Scientific Advisory Group for Emergencies (Sage) for the Cabinet Office at the end of July.