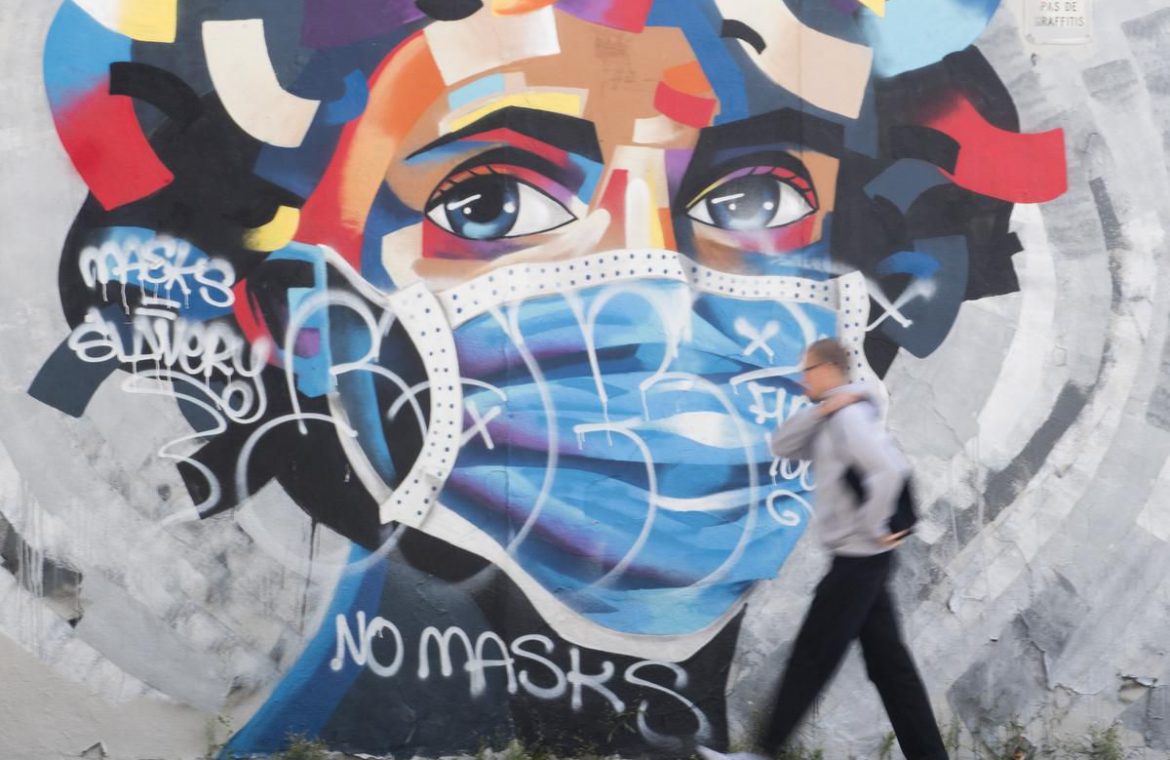 7:42 a.m. Australia recorded its deadliest day of the pandemic Monday

4 a.m. The federal Conservatives are calling on WE Charity to release a series of documents they promised to hand over

9:37 a.m. Henrietta’s Pine Bakery in Muskoka has confirmed one of its staff members has tested positive for COVID-19.

The bakery alerted its community via Facebook, posting that both locations would be closed until further notice, “as we implement precautionary steps due to a case of COVID-19.”

The company has also posted an alert on its website.

Henrietta’s Bakery operates two Muskoka locations, one in Dwight and one in Huntsville. It is unclear which location the staff member worked at.

Owner Geoffrey Harriss posted on Facebook: “A staff member has tested positive for COVID-19 from elsewhere,” adding the exposure occurred over “the last two days.” All precautions were in place, he wrote.

“We are working with the health unit at the moment for more advice. We will update as we learn more,” Harriss wrote.

The Simcoe Muskoka District Health Unit confirmed in an email that it is investigating a COVID-19 case “associated with a food establishment in Muskoka,” but would not confirm the specific location, “as this could compromise confidentiality.”

The health unit said it was in the initial stages of the investigation and as a result has not required the establishment to close.

“The case in question in self-isolating while awaiting further direction,” the statement read.

8:40 a.m. India’s economy contracted by the most on record last quarter as the world’s biggest lockdown to stem the coronavirus pandemic brought key industries to a halt and rendered millions of people jobless.

Gross domestic product shrank 23.9 per cent in the three months to June from a year earlier, the Statistics Ministry said in a report Monday. That’s the sharpest decline since the nation started publishing quarterly figures in 1996, and was worse than any of the main Asian economies tracked by Bloomberg. The median estimate in a survey of economists was for an 18 per cent contraction.

Financial services — the biggest component of India’s dominant services sector — shrank 5.3 per cent from a year ago. Data also showed: Trade, hotels, transport and communication declined 47 per cent, manufacturing shrank 39.3 per cent, while construction contracted 50.3 per cent. Mining output fell 23.3 per cent , and electricity and gas dropped 7 per cent. Agriculture was the lone bright spot, growing at 3.4 per cent.

8:37 a.m. As two million students across Ontario get ready to return to school, day camps, which have been running for much of the summer with almost no cases of COVID-19, could provide some insight into how to create an environment where kids can learn and play safely.

Some lessons learned from almost two months of summer camp include the importance of creating cohorts, strictly controlling the environment, increased hand-washing, and “being prepared for everything.”

In June, when much of the province was in lockdown, day camps and daycares across the GTA were planning programs that could accommodate large groups of children in relatively close proximity, with stringent new health and safety rules in place.

Read the full story from the Star’s Noor Javed

8:04 a.m. What if COVID-19 antibodies could be retrained to attack cancer cells? A Dalhousie University scientist is leading an international team of researchers in exploring such a possibility.

Read the full story from the Star’s Steve McKinley

7:42 a.m. Australia recorded its deadliest day of the pandemic Monday as the government urged hot spot Victoria state to announce its plans to lift a lockdown on the country’s second-largest city.

Victoria’s health department reported 41 deaths from COVID-19 and 73 new infections in the latest 24-hour period. While the deaths were a state and national high, the tally of new infections was Victoria’s lowest since 67 new cases were recorded on June 30 in the early weeks of the second wave of the pandemic, which has primarily been concentrated in the state capital, Melbourne.

A six-week lockdown in the city is due to be relaxed on Sept. 13. But the state government has not said how it will be relaxed or given any assurances that it won’t be extended.

7:35 a.m. Orchard Villa, the Pickering long-term-care home with the most COVID-19 deaths in the province, continued to fail to comply with provincial legislation designed to protect residents – even after more than 70 residents died and military personnel were sent in to assist.

As the pandemic raged on in May and June of this year, inspectors from the Ministry of Long-Term Care acting on a complaint found more than a dozen instances in which the home failed to comply with regulations, including not ensuring staff received infection control training within one week of hire, failing to ensure a resident who had fallen received a proper skin assessment, and failing to stop staff from administering a drug to a resident that was not prescribed.

These findings are in addition to more than 120 citations of failure to comply with the Long-Term Care Homes Act and its regulations between July 2015 and December 2019 recently detailed by the Star.

Read the full story from the Star’s Kenyon Wallace

5:35 a.m.: Quebec’s largest English language public school board is holding its first day of classes this morning amid the ongoing COVID-19 pandemic.

The English Montreal School Board says it will closely follow COVID-19 guidelines set by the provincial government.

Students will still be able to take the bus to school, but health and safety guidelines only permit 44 students per school bus instead of the typical 72.

5 a.m.: An overwhelming majority of Ontarians are afraid that a second wave of COVID-19 is near, with levels of anxiety remaining unchanged since the pandemic first erupted in the province in March.

Around 83 per cent of Ontarians surveyed say they’re worried that social distancing and lockdown measures are being relaxed too quickly, as schools and businesses open again. And 73 per cent say they’re becoming more wary of people’s abilities to properly follow protocols that curb the spread of illness.

These findings come from a Canadian Mental Health Association (CMHA) poll of 1,002 Ontarians, conducted with the help of Pollara Strategic Insights in late July. The association said the survey was commissioned to better understand how people’s mental health is changing as the pandemic progresses.

4:38 a.m.: The Olympic flame is going on display in Tokyo, just a short walk from the new National Stadium where it was supposed to be burning a month ago.

The flame arrived in Japan from Greece in March and has been largely hidden away in Tokyo since the Olympics were postponed until next year because of the COVID-19 pandemic.

“In this situation during COVID-19, I think athletes aiming for the Olympic and Paralympic Games are training hard each day — with great anxiety,” said Yamashita, a former Olympic judo gold medallist , speaking in Japanese. “I am convinced that the torch displayed today will support the hearts of those athletes.”

4 a.m. The federal Conservatives are calling on WE Charity to release a series of documents the Toronto-based youth organization promised to hand over to a House of Commons committee before Prime Minister Justin Trudeau prorogued Parliament.

But WE is pushing back against the Tories’ request, with the organization’s legal counsel saying it amounts to “politics, not proper process.”

The Tories’ request is contained in a letter sent Sunday from Conservative finance critic Pierre Poilievre and ethics critic Michael Barrett to Craig and Marc Kielburger, the brothers who co-founded WE more than 20 years ago.

It represents the official Opposition’s latest effort to continue digging into the decision to have WE run a multimillion-dollar student-volunteer program, after Trudeau temporarily shuttered several Commons committee investigations by proroguing Parliament on Aug. 18.

In their letter, Poilievre and Barrett note the Kielburgers and other WE officials committed to provide members of Parliament with answers to several questions they were unable to answer while appearing before the finance committee.

Those unanswered questions are outlined in two annexes prepared by the Library of Parliament and attached to the Conservatives’ letter, and include details on WE’s discussions with the Liberal government about the Canada Student Services Grant.

The finance committee also asked the charity to provide more information about two trips that WE hosted for then-finance minister Bill Morneau and his family to Kenya and Ecuador.

This report by The Canadian Press was first published Aug. 31, 2020.

Previously: Back in April, an on-schedule U.S. Open simply did not seem possible.

The coronavirus was at its peak in New York; a building on the tournament grounds housing indoor tennis courts was converted to a field hospital.

The pandemic was locking down much of society, including sports. Wimbledon was cancelled for the first time in 75 years, the French Open was postponed, and the U.S. Tennis Association said it was considering “the possibility” of changing its dates, too.

On Monday, the last day of August, the 2020 U.S. Open will, indeed, begin — as scheduled, albeit without any spectators, and with one player dropped from the field because he tested positive for COVID-19.

Benoit Paire, a Frenchman who was seeded 17th, was replaced in the draw Sunday, a striking reminder of the circumstances surrounding this attempt to ensure that the Grand Slam show goes on.