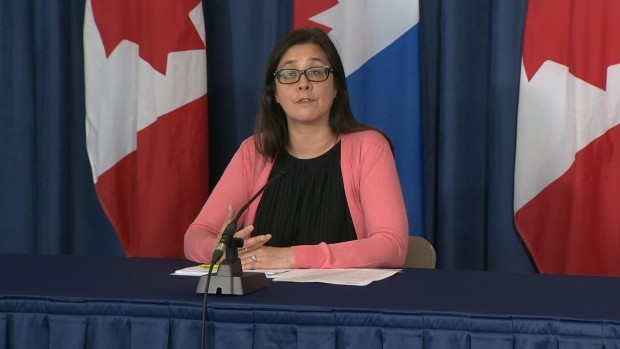 Toronto’s top public health official says that there is “no question” that there will be a resurgence of COVID-19 in the fall and that everything, including another lockdown, will be on the table when it comes to limiting the spread of the virus.

Dr. Eileen de Villa made the comment at city hall on Monday afternoon as she detailed the efforts being undertaken by Toronto Public Health to prepare for a second wave.

She said that while “there is no way to know what will happen exactly” in the months ahead the experiences of other jurisdictions does suggest that some “resurgence in Toronto is inevitable.”

In fact cases may already be creeping upwards. Earlier this month Toronto’s seven-day rolling average of new cases hit a recent low of 15.9 but since then it has ticked steadily back up and now stands at 35.

“We have to find a way to live with COVID-19 in our city. It isn’t a question of if we will see more virus; in Toronto, it is a matter of when,” de Villa warned on Monday.

De Villa said that as part of the plans to limit any second wave, Toronto Public Health will be deploying “community outreach rapid response teams” in the parts of the city where higher levels of infections have been observed. She said that staff are also working with provincial government officials to support more pop-up testing sites in those neighbourhoods.

Toronto Pubic Health will also continue to have more than 700 staff working on COVID-19 contract tracing and case managements.

De Villa said that discussions with the federal government to create an isolation facility for COVID-19 patients who are unable to safely isolate at home are also ongoing.

“I think we have to consider whatever is necessary in order to best protect the residents of Toronto,” de Villa said in response to a question about whether businesses could again be shuttered should cases spike this fall. “We are certainly hoping it doesn’t come to that but I think we have to follow the best available evidence and that includes what we have learned from our own experience and we know that it does take a series of public health measures to actually bring virus spread under control.”

City prepared to suspend some services again if needed

City manager Chris Murray told reporters at Monday’s briefing that the city has already conducted a review of its response to the first wave of COVID-19 in order to identify what worked well and what didn’t.

He said that there are now several administrative bodies “designed specifically to centralize decision making,” including a strategic command table that meets weekly and a Personal Protective Equipment (PPE) task force.

Looking ahead, Murray said that the city will continue to deliver essential and critical services “in any scenario” but retains the ability to reduce or temporarily suspend other services should the challenges posed by COVID-19 merit it.

“The city is ready to be nimble and act quickly,” he said.

Murray said that Toronto civic centres, city hall and Metro Hall will remain closed to the public for now with the occupancy in city buildings capped at 30 per cent in order to reduce the risk of virus spread.