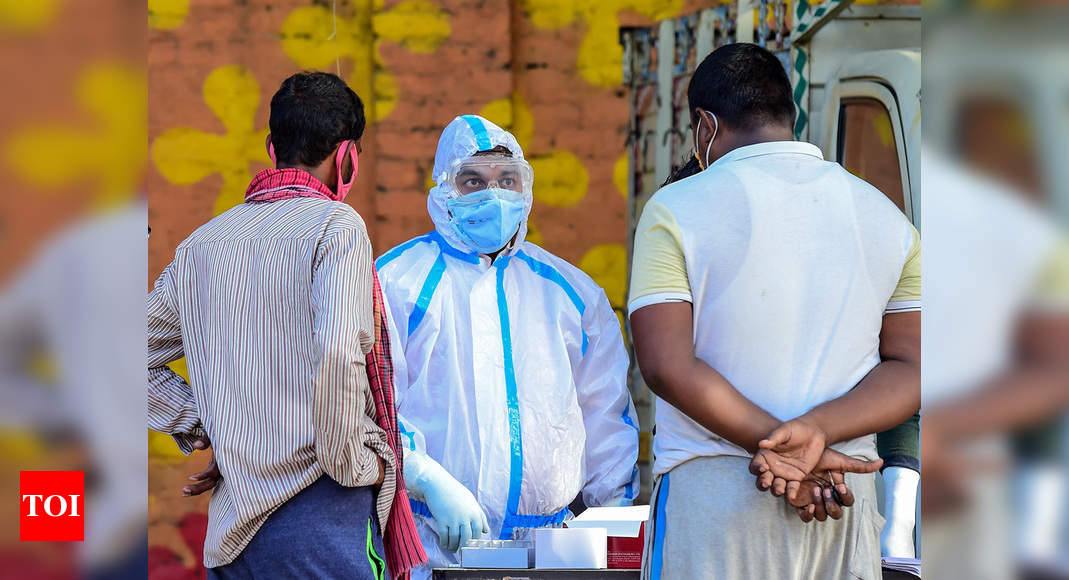 NEW DELHI: Indian scientists have observed a higher association between asymptomatic Covid-19 cases and viral load, or the amount of virus in an infected person’s bodily fluid, in a study of over 200 patients with SARS-CoV-2 virus in Telangana, a “surprise” finding that may better inform the policymakers about the spread of the novel coronavirus infection.
The researchers, including those from the Centre for DNA Fingerprinting and Diagnostics (CDFD) in Hyderabad, advise testing asymptomatic primary and secondary contacts followed by surveillance.
“It is important to consider the possibility of infection from asymptomatic patients — presumably harbouring good immunity — spreading into individuals possessing not so robust immunity leading to increased morbidity and mortality,” Murali Dharan Bashyam, from CDFD’s Laboratory of Molecular Oncology, told PTI.
Reacting to the findings of the study, immunologist Satyajit Rath said he is quite surprised by the finding of higher viral loads in asymptomatic individuals.
“Other studies, as the authors note, report an association the other way round, if at all,” Rath, from the National Institute of Immunology (NII) in New Delhi, told PTI.
More on Covid-19

The main goal of the yet-to-be peer reviewed study, published in the medRxiv preprint repository, was to identify dominant viral lineages circulating among the population of Telangana, especially in Hyderabad.
The researchers noted that Telangana has seen an unusually high rate of infection with a sharp spike observed in the number of cases beginning from the second half of April, with 2,734 new cases and nine fatalities reported just on Tuesday, taking the caseload in the state to 1.27 lakh.
The study analysed whole genome sequence data of virus samples from 210 patients in and around Hyderabad, and determined the highly frequent mutations in the viral genome.
“We observed that a majority of the population under study (over 95 per cent) was infected with the 20B clade (or strain), while a few samples belonged to other clades and subclades,” Bashyam told PTI.
Live updates: Coronavirus pandemic
“More importantly, 100 per cent of the virus from period May to July belongs to the 20B clade,” he said.
The scientist noted that while initial entry of the virus in the state came from 2-3 different viral clades, 20B was able to establish itself as the majority strain starting from May.
“We also observed a very high predominance of D614G spike protein mutation, which now has been shown to be associated with higher infection rates of the virus,” Bashyam noted.
The researchers were also able to identify a few unique mutations not identified from other studies in India, in a functionally critical region of the non-structural protein 3 (nsp3) of the virus, which is responsible for replication of the viral genome.
According to the scientists, the samples collected from late May till July represented a higher proportion of asymptomatic cases when compared to samples collected earlier.
A majority of the samples belonged to the age group between 15-62 years, with males (61 per cent) dominating the profile distribution over females (39 per cent), they said.
The scientists compared the distribution of cases with respect to cycle threshold (Ct) values, which is a proxy for viral load.
Symptomatic cases appeared to be associated with higher Ct values, thus lower viral load, compared to asymptomatic ones, which was unexpected, the study found.
In a real time PCR test, a positive reaction is detected by accumulation of a fluorescent signal, and the Ct value is the number of cycles required for the fluorescent signal to cross the threshold or exceed the background level.
There was a reduction in the Ct values in samples analysed near the end of June, implying that more recent samples seemed to carry a higher viral load than earlier samples, according to the scientists.
“We have observed a relatively higher association between asymptomatic cases and viral load. However, this association is greatly dependent on multiple factors including the sample demography as well as overall immune health of the patient during sample collection,” Bashyam said.
He noted that the data pertains to samples collected up to July first week, adding that it will be interesting to check whether the trend continued in August-September.
“Viral transmission is based on several factors but based on our results, it is now important to initiate studies on possible transmission of virus from asymptomatic patients,” Bashyam noted.
He said another interesting finding of the study was that most samples belonged to the age group of 20-50 years, and one would expect this age group to have robust immunity.
Bashyam noted scientists and clinicians all over the world are learning continuously and advising respective governments based on which they can take informed public health decisions.
“In this context, it is important to continue work similar to the one we have performed so that the state government can be better informed about the spread of the infection,” said Bashyam.
“We will definitely advise testing asymptomatic primary and secondary contacts followed by surveillance,” he said.
Given the wide range of genetic heterogeneity in the Indian population, the scientists said it is difficult to extrapolate the findings to other Indian states.
“All it tells us for public policy regarding Covid-19, I think, is what we already should know, namely, that all infections have some potential for transmission,” Rath added.
In Video:Higher viral load in asymptomatic Covid-19 patients, Indian scientists find

Don't Miss it This Florida School Is What a COVID-19 Fiasco in the Making Looks Like
Up Next New China virus: Cases triple as infection spreads to Beijing and Shanghai – BBC News