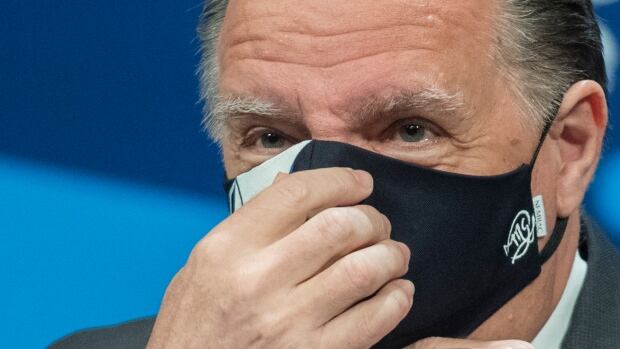 Premier François Legault sounded the alarm Monday about the increasing number of COVID-19 cases in the province and warned Quebecers that he will be forced to re-impose lockdown measures if they don’t start obeying public-health rules more diligently.

“There’s been a general slacking on the rules in Quebec,” said Legault at a press conference Monday.

“People are returning to work, and with the temperature, we will gradually spend more time indoors. … There is a challenge ahead of us, and it is important for us to be more disciplined.”

The number of new cases has been rising for two weeks in Quebec. According to Legault, public-health officials have not been able to identify a single cause.

But he also said that too many Quebecers have been taking a lax approach to maintaining health and safety guidelines in recent weeks.

He pointed to several potential contributing factors for the spike, including the resumption of sports and the reopening of bars and indoor private gatherings.

Legault raised the prospect of closing schools if the number of new cases continues to rise. Most schools are just reopening now for the first time since March.

“Above all, I do not want to close the schools,” Legault said. “We owe this to our children. In order for our children to stay in school, we have to be careful.”

There have been a few outbreaks in schools since classes started last week. By the second day of back to school for thousands of students, 20 teachers were in quarantine in the Laurentians, one school was temporarily shut down and students in several schools were sent home.

Legault said Friday that though the situation is not ideal, only a “very small number” of students were affected, out of hundreds of thousands who returned to classrooms.

Starting Sept. 14, students will also be able to resume extracurricular activities, such as sports and music, outside of their bubbles.

Quebec Health Minister Christian Dubé said he is not ruling out putting in place punitive measures against people who flout health and safety guidelines.

Dubé said those who are gathering in large numbers may not realize how dangerous their actions can be to the public, with some acting in what he called unacceptable ways.

One example of such irresponsible behaviour, he said, was a karaoke night in which a microphone was passed around among friends. That gathering caused at least 10 cases of coronavirus, with more expected to be confirmed later today.

While the number of cases have increased, the number of hospitalizations and deaths have not gone up accordingly, possibly because more young people are getting infected.

“Young people are less at risk of serious consequences,” Legault said. “But we must not rule out the possibility that they will then infect others who are more vulnerable.”

Legault called on Quebecers to avoid indoor private gatherings, even among family members or friends, in the coming weeks.