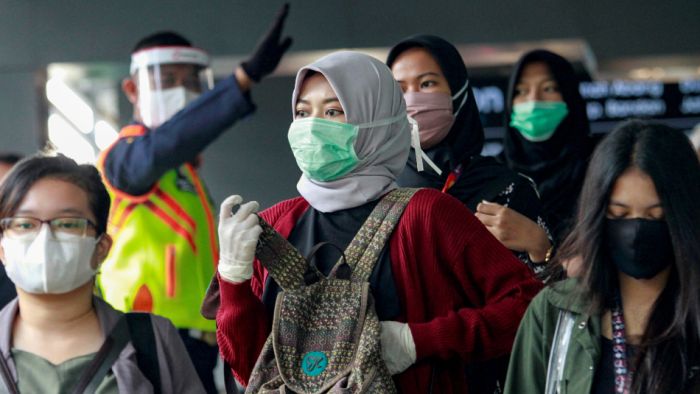 Indonesian doctor Disa Edralyn tested positive for coronavirus in July and believes she likely caught it while working at a Jakarta hospital.

Key points:More than 100 doctors have died from the virus in the past six monthsIndonesia registered a record of 3,000 cases for two consecutive days last weekExperts believe Indonesia is still experiencing its first wave and is yet to see a peak

Dr Edralyn, who has now recovered, said she knew the risks associated with her job, and her bigger concern was that people were not taking COVID-19 seriously.

She said health workers in Indonesia have had to work longer hours and jeopardise their immune systems as more patients were admitted to hospitals.

“I’m not complaining, I know that being a doctor has big risks, but who wants to keep standing this close to death?

“What if many health workers are sick? Who will take care of you?” she told the ABC.

More than 100 doctors have died from the virus in the six months since the Indonesian Government announced the country’s first case.

And with Indonesia registering a record 3,000 daily cases for two consecutive days last week, scientists say the nation appears to be still going through the first wave of transmission, with little sign of slowing down.

“To date, there are 155,000 positive cases in Indonesia, but we should be grateful that 111,000 people have recovered — that’s 70 per cent,” Mr Widodo told the media last Tuesday in the city of Banda Aceh.

Mr Widodo’s optimistic assessment has been echoed by his ministers, with the Government’s Cabinet Secretary, Pramono Anung, saying the nation is finally “on the right track” with its handling of the virus.

Cases could be ‘five to 10 times’ higher than official figures The WHO says Indonesia’s national testing regimes are uneven across populations.(AP: Kusumadirezza)

Indonesia now has about 177,600 confirmed cases, according to the latest figures by Johns Hopkins University.

The country has also fallen short on the World Health Organisation’s recommended number of coronavirus swab tests, which suggests at least one person per 1,000 population every week.

For a population of around 268 million people in Indonesia, this equates to 40,000 tests per day.

But according to WHO data, the country has only tested an average of 24,000 people since July — which also falls short of the 30,000 daily target Mr Widodo set for that period.

National testing regimes are also uneven, with 48 per cent of daily tests over-represented by results from greater Jakarta, the latest Indonesian WHO situational report said.

There remain grave concerns about the high rate of children dying from COVID-19 in Indonesia, even as the country transitions to relaxed social-distancing restrictions.

The rates of tracking and contact tracing have been criticised by Kawal COVID-19, an independent website that collates reliable data on Indonesia’s epidemic.

Of the country’s 514 cities and regencies, only 58 can adequately conduct contract tracing, it states.

“If we still don’t have the testing capacity, at the very least we should be able to track and quarantine a minimum of 30 people for every positive case,” Ronald Bessie of Kawal COVID-19 said.

Epidemiologist Pandu Riono from University of Indonesia told the ABC active cases in Indonesia would likely keep rising until the start of 2021.

“Because testing is limited, the number of cases in the population must be greater,” he said.

“It could be five to 10 times the official number of cases.”

Figures ‘open to debate’: Indonesian Embassy Local experts say there are no policies that support restrictions on movement.(AP: Dita Alangkara)

The Government has openly criticised what it perceives as negative foreign media coverage of its handling of the virus.

In a statement released by the Indonesian Embassy in Australia last month, the Government said it was “working hard to mitigate the effects of the virus while maintaining the livelihood of [its] people”.

“In the case of Indonesia, it is evidently important to maintain economic and social welfare while promoting health protocols. Each country will have its own response or approach,” the statement said.

“Ultimately, the only common benchmark of a comparison point between countries is the number of deaths from this virus as a percentage of the population.

“However, even these figures are open to debate as the deaths attributable to COVID-19 are overshadowed by other underlying health complications.”

What happens to Bali when tourists leave?

The dramatic 95 per cent drop in international tourists arriving in Bali affects millions of its residents who have relied on the industry for generations.

An epidemiologist from Indonesia’s Airlangga University, Windhu Purnomo, told the ABC a common perception among society and government was that the disease presented a low health risk.

“Many policies and actions are contradictory to the principles of breaking the chain of transmission of COVID-19 itself,” Dr Purnomo said.

“The [National COVID-19] Task Force has even allowed the opening of cinemas, given permission for music concerts, schools are about to open, and people are free to enter and exit hotspots.”

Dr Purnomo said there were no policies that supported restrictions on movement, such as financial assistance for those who must work from home.

“Therefore, I think the current consideration [behind the policies] is not epidemiological or based on public health anymore,” he said.

“It is free and normal, as if there is nothing happening in Indonesia.”

Dr Riono and Dr Purnomo agreed the basic principles of testing, tracing, and isolation were key to controlling the pandemic.

They believe the prolonged first wave and the yet unseen peak of the pandemic in Indonesia reflect the lack of efforts in these areas.

The ABC has contacted the Indonesian Embassy for comment.