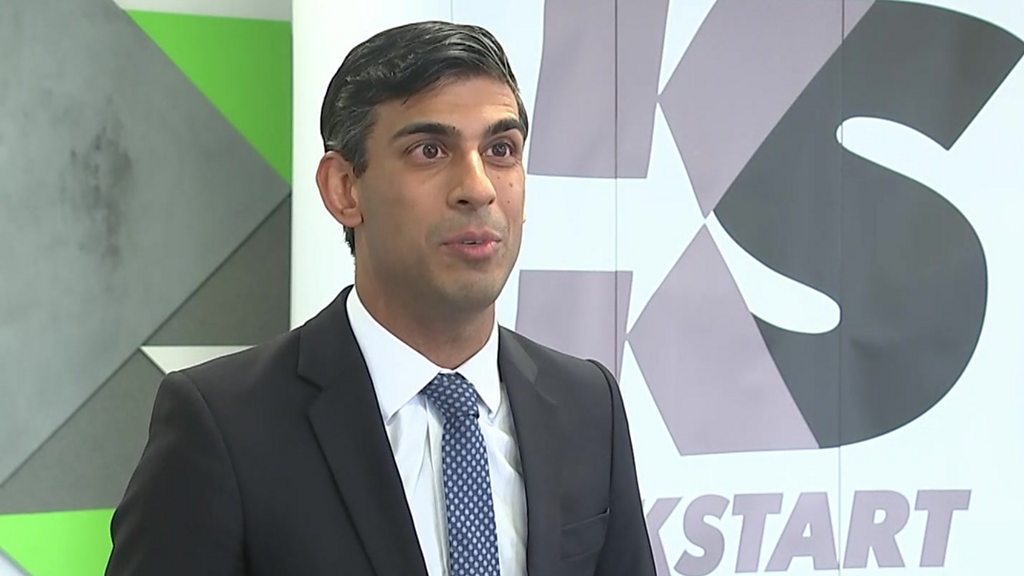 Media captionThe government “cannot carry on doing exactly what we did this year forever”, says the chancellor

Chancellor Rishi Sunak has reassured recently-elected Tory MPs there will not be a “horror show of tax rises with no end in sight”, as the government deals with the costs of coronavirus.

He urged the 2019 Conservative intake to show trust to overcome the “short-term challenges” the party faces.

Some MPs have expressed fears U-turns are hurting the government’s standing.

Mr Sunak accidentally revealed the wording of his statement while holding his notes outside 11 Downing Street.

The Conservative Party, which won an 80-seat majority at December’s general election, has seen its opinion poll lead over Labour cut in recent weeks.

This has led to concerns among some MPs who won seats in traditional Labour heartlands in the Midlands and northern England, known previously as its “red wall”.

An unnamed “red wall” Conservative told the Press Association MPs in these areas, and others in marginal seats, were “jittery” following a series of U-turns on subjects including exam results, the wearing of face coverings and school meal funding. They described the situation as a “megadisaster”.

And Sir Geoffrey Clifton-Brown, treasurer of the 1922 Committee of Tory MPs, warned against “own goals”, saying: “We may have a big majority but that still doesn’t mean to say that we shouldn’t be as competent as possible as a government.”

A photographer picked up the words in Rishi Sunak’s statement

It was reported at the weekend that substantial corporation tax rises and capital gains tax changes are being considered by the Treasury to deal with the enormous costs of coronavirus. But the government dismissed this as “speculation”.

The wording of Mr Sunak’s statement, read out during a meeting in Parliament on Wednesday with Tory MPs first elected in 2019, which the prime minister also attended, was revealed when a photographer noticed the chancellor holding a script sheet while leaving 11 Downing Street.

It read: “We will need to do some difficult things, but I promise you, if we trust one another we will be able to overcome the short-term challenges.”

Referring to the reports that there could be tax increases to pay for costs incurred during the pandemic, including the furlough scheme, it added: “Now this doesn’t mean a horror show of tax rises with no end in sight.”

It continued: “But it does mean treating the British people with respect, being honest with them about the challenges we face and showing them how we plan to correct our public finances and give our country the dynamic, low-tax economy we all want to see.”

With more MPs back at Westminster, the prime minister and his chancellor took the opportunity to reassure restless Tory backbenchers about the government’s strategy.

How to pay for the huge package of interventions to deal with the pandemic and its effects is at the forefront of Rishi Sunak’s mind ahead of the Budget later this autumn.

Borrowing has ballooned and the prime minister has already promised there will be no return to austerity.

But there is nervousness among Tory MPs about rumours of tax rises and about the government’s decision-making and messaging more broadly.

Mr Sunak told his Conservative colleagues that ministers needed to show people the plan for correcting public finances. He faces difficult choices while devising it.

Government sources denied the revelation of the chancellor’s words in this way was “embarrassing”, adding that they would have become a matter of public record anyway.

Discussing the coronavirus crisis, Boris Johnson told the MPs: “I know it’s been tough. I’ve got to warn you, it’s about to get tougher. The waters are about to get choppier. But we are going to deal with it.”

The prime minister later addressed a meeting of all backbench Conservative MPs, with the 1922 Committee getting together for the first time since Parliament’s summer recess.

One MP present said he had been “full of beans”, while a minister added that both the day’s meetings had been about “calming the troops”.

Don't Miss it USA surpasses Italy and China with the most confirmed COVID-19 cases in the world | ABC News
Up Next Today’s coronavirus news: Resurgence of COVID-19 in Toronto has begun, de Villa says; Ontario reporting 133 new cases, no additional deaths