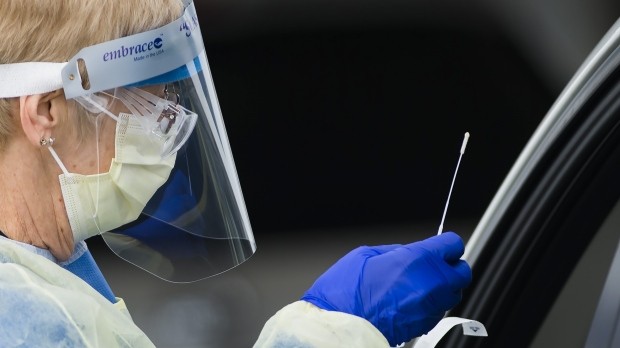 Over the weekend the province reported 122 and 148 new cases, an increase which Chief Medical Officer of Health Dr. David Williams conceded was “concerning.”

The numbers dipped back down earlier this week with the province reporting 114 new cases and 112 new cases over a two-day period.

The 133 new cases reported on Wednesday do suggest a return to the higher levels of infection seen over the weekend, however.

It also comes as Toronto’s medical officer of health warns of an “inevitable” increase in cases as students return to the classroom in the coming weeks.

“It isn’t a question of if we will see more virus in Toronto, it is a matter of when,” Dr. Eileen de Villa said at a briefing on Monday.

In early August, Ontario went an entire week with the daily count of new cases in the double digits.

Since then the number of confirmed cases has slowly trended upwards and the province has now recorded more than 100 new infections for an entire week and on 13 of the last 14 days.

The seven-day rolling average of new cases has also risen steadily and now stands at 122.7. It was at 103.2 at this point last week and had dipped as low as 85 earlier in August.

Of the 133 new cases confirmed on Wednesday, more than half of them are in either Toronto (43 cases) or Peel Region (34 cases) while another 23 cases are spread across the rest of the GTA, including 15 in York Region.

Meanwhile, 21 of Ontario’s 34 public health units reported no new cases at all over the last 24 hours and 29 of them reported five or fewer cases.

If there is good news to be found in the latest data it is the fact that active cases actually declined slightly to 1,236 province-wide after 137 existing infections were moved over to “recovered” in the database.

The province also continues to conduct more tests than any Canadian province, even when adjusted for population. On Wednesday its labs turned around 24,004 tests, surpassing the three million mark overall since the beginning of the pandemic in March.

Speaking with CP24 earlier on Wednesday, infectious diseases specialist Dr. Isaac Bogoch said the unfortunate reality is that the virus is probably going to be here for a while and that “there is nothing that is 100 per cent safe” when it comes from protecting yourself.

“The more you are around other people the more you might put yourself at risk for getting this infection and everyone has to look at their individual circumstances, whether you are a teacher or if you are going back to work in another workplace,” he said. “How is your workplace designed? What are the safeguards in place to keep people apart? What safeguards are in place to keep people safe? It is really important to have a critical look at how those fundamental public health principals are going to be applied to your setting. Is there good ventilation? Are people wearing masks and wearing them consistently? Are there hand sanitation stations? Can you really adhere to physical distancing measures?”

The latest data suggest that there are 60 people hospitalized with COVID-19 province-wide, including 13 individuals who are receiving treatment in intensive care units.

Those numbers remain well off the peak seen in April when more than 1,000 people were hospitalized, including 264 in ICU units.

Other highlights from the data:

There was one more death over the last 24 hours. The total death toll since March is now 2,812.

Younger people continue to make up the greatest share of new cases. On Wednesday 57 of the 133 new cases involved people between the ages of 20 and 39. That is compared to zero new cases in the oldest demographic (ages 80 and up).

There were three new outbreaks reported in long-term care homes on Wednesday. The total number of active outbreaks in that setting is now 18.

There have been 42,554 lab-confirmed cases since the start of the pandemic. Nearly 5,000 of those have resulted in hospitalization (11.5 per cent).

The hot spot for infection outside the GTA continues to be Ottawa, where a dozen new cases were reported on Wednesday.