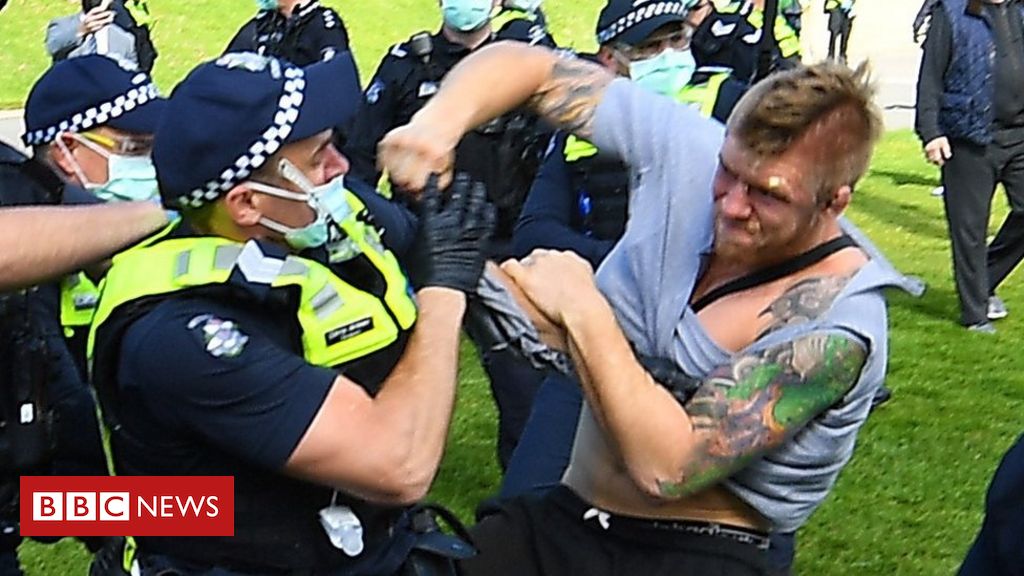 Australian police have made dozens of arrests amid anti-lockdown protests attended by hundreds nationwide.

In Melbourne, the centre of Australia’s outbreak, about 300 people marched in defiance of tough measures that have been in place for a month.

Other protests took place in Sydney, Brisbane, Adelaide and Perth.

On Friday PM Scott Morrison said seven of the country’s eight states and territories had agreed to open their internal borders by December.

He suggested an eventual travel bubble with New Zealand could boost tourism and help revive the economy.

“In the absence of a vaccine, we may have to live this way for years,” he warned.

Confirmed virus cases in Australia have more than tripled to over 26,000 over the past two months, with deaths rising to 748 from 104 over the same period.

What happened at the protests?

Victoria Premier Daniel Andrews was also singled out – “We are in a city where the cure from Daniel Andrews is actually worse than what’s happening,” protester Fiona Kat told AFP.

Police said they had made 15 arrests – 14 for breaching lockdown rules and one for assaulting a police officer who received lacerations to the head. They also issued more than 150 fines for lockdown breaches.

image copyrightEPAimage captionThere were scuffles between police and protesters in Melbourne

Mr Andrews condemned the event – “It is not safe, it is not smart, it is not lawful. In fact, it is absolutely selfish for people to be out there protesting,” he told reporters.

There were smaller rallies elsewhere, including two in Sydney and one in Byron Bay that turned violent, according to local media. Police made 14 arrests, including three people suspected of assaulting police officers.

Police had earlier drawn criticism for the arrest of a pregnant woman for promoting the protest online. On Friday officers broke into the home of a former bodybuilder and conspiracy theorist who had also been calling for people to join the event.

Why does Melbourne have such a strict lockdown?

Victoria has been in a six-week lockdown since July to curb a coronavirus outbreak that has fuelled Australia’s second wave. Authorities have imposed stay-at-home rules and a curfew in Melbourne, the state capital. The lockdown has closed many businesses and banned gatherings around the state.

Victoria accounts for 75% of Australia’s total infections and 90% of all deaths. The state reported 11 deaths on Saturday and more than 70 new infections – down from the peak of 725 new infections on 5 August but more than health officials had hoped for five weeks after the restrictions came in.

On Sunday Mr Andrews is due to announce some easing of restrictions. It follows calls by Australia’s federal government and businesses to that end. The state accounts for about a quarter of the country’s economy.

However he has urged caution. “Until you fix the health problem, there can be no economic repair,” he said.

What about the rest of Australia?

On Saturday there were five new coronavirus infections in New South Wales, one in Queensland and one in South Australia.

Mr Morrison said plans to reopen state borders by December would involve coming up with a way of managing virus hotspots.

However the geographically largest state, Western Australia, has rejected the plan until the other states have the virus under control. It has not had a local transmission for 129 days and there are no restrictions in place there.

Speaking after a national cabinet meeting on Friday, Mr Morrison said Australia could apply the hotspot approach to New Zealand as well.

Meanwhile a former prime minister of the Cook Islands, Joseph Williams, has been confirmed to have died of coronavirus in New Zealand. It is the second death there in two days and brings the country’s total to 24.