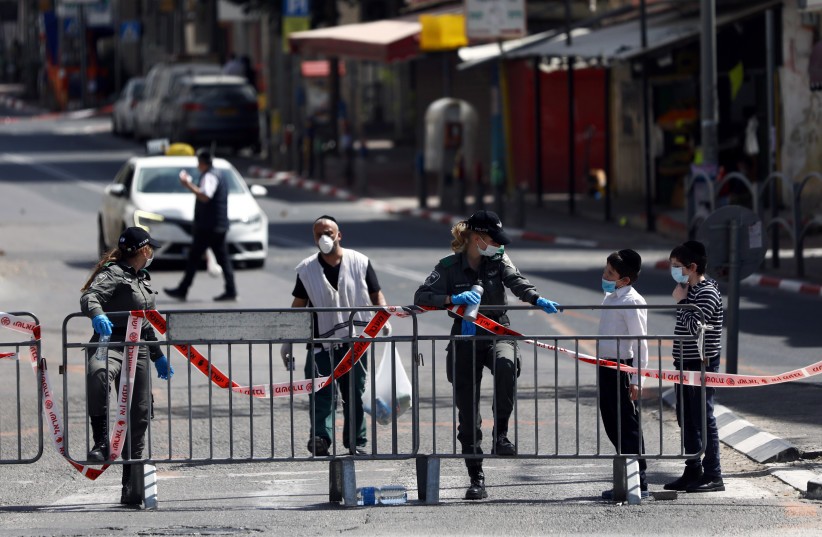 Prof. Ronni Gamzu arrived Sunday morning at the Constitution, Law and Justice Committee Sunday morning to defend his traffic light program and discuss what it will look like in those “red cities” that are expected to be locked down.

Barring any dramatic changes after the hearings that are taking place now, the final list of red cities that will be submitted to the ministers to consider for lockdown are neighborhoods in Beit Shemesh, Bnei Brak, Elad, Immanuel, neighborhoods in east Jerusalem, Kafr Qassem, neighborhoods in Lakia, Tira and Umm el-Fahm.

The final list will only be published in late afternoon and the lockdowns would begin on Monday. Gamzu explained last week that residents of the reddest cities would be restricted from traveling more than 500 meters from their homes. In addition, schools – except special education – would be closed, entry and exit would be limited to only essential workers, and nonessential businesses would be banned from operating.

Cities that won’t be fully locked down will be subject to other restrictions, such as night Fahmi closures, which would likely run from 7 p.m. to 5 a.m. each day.

Gamzu said that “there is a phenomenon in the country of people avoiding being tested for coronavirus,” which leads to a higher rate of infection because the disease spreads and ultimately leads to the people being tested already having symptoms, meaning a higher percentage of those screened testing positive.

“When you go to get tested and don’t wait or hide, the positive test rate will not be 25%,” Gamzu said in a statement directed at Arab and haredi communities, where some residents seem to delay screening.

The percentage of people who are testing positive for the novel coronavirus is spiking unprecedentedly. Over Shabbat, some 1,493 people were diagnosed with coronavirus – 9.4% of those screened. Until recent days, only around 8% of people tested positive.

The numbers, which were released by the Health Ministry ahead of today’s meeting to discuss which restrictions will be placed on which red zone, continued to reflect a high number of dead: 1,110, with three more people dying since midnight on Sunday.

Israeli media reported on an outbreak in a Haifa geriatric center – 80 people are infected and two have already died.

There were 445 people in serious condition, including 119 who were intubated.

Gamzu stressed that the task of cutting off the chains of infection has been transferred to the IDF and that by November 1 this protocol should be “fully functional.”

“It is clear that when there is an outbreak that exists in different populations, we are still not fully effective and cutting off the infection chains. It exists, but there is still an increase in infections.”

Since announcing that the coronavirus cabinet agreed to lock down red cities last week, most of which are haredi (ultra-Orthodox) or Arab, there has been strong backlash from both sectors against the move.

At the Knesset meeting, the mayor of Elad said that his “residents are not counted” and that many of the people who are being considered sick do not live in Elad outside the town at yeshivas or other institutions.

He begged Gamzu not to shut down the town.

Gamzu replied that “the decision to close [down Elad] is not easy for me, but you are currently not able to completely reduce the morbidity. There has been a decrease, but there is currently an increase – we need to help you.”

He added that “the problem of many ultra-Orthodox neighborhoods and cities is not behavior, but infrastructure and overcrowding. The infection passes from one family to the next. This is not an expression of distrust of the residents. I was there – they really put on masks and are really disciplined.”

MK Yitzhak Pindrus (United Torah Judaism) on Sunday told KAN news that, “I am a resident of the Jewish Quarter. There are 15 registered patients here – some of them don’t even live here and the neighborhood is considered red. Nobody understands why.”

Also, the chair of the Constitution and Law Committee, MK Yakov Asher, appealed to Prime Minister Benjamin Netanyahu not to allow for complete closures immediately. He presented an alternative to closure: restrictions and partial or flexible closures overseen by local authorities. He said this will be “much more effective than a full closure in a few individual cities.”

At the meeting he stressed that “by no means does it make sense to rush and impose a total closure on a few individual cities. I am sorry to say this, but the proposal to impose a full closure on a number of individual cities is not a plan of action. It is the wrong decision that comes from pressure and helplessness, without any professional judgment.”

Housing and Construction Minister Ya’acov Litzman (UTJ) said last weekend that he would consider leaving the coalition if a lockdown was enforced over the High Holy Days, however those threats were seen to be largely just that – threats.

Regarding Arab communities, MK Ahmed Tibi said at the meeting that “there are no tools to lead this war.

“Weddings and gatherings are the focus of the outbreak,” he said. “We said this right at the beginning: To prevent what is happening now, we need to open the halls with restrictions. This is not done, so uncontrolled weddings are seen in the streets. It is serious.”

He added that the police to not properly enforce restrictions in Arab society, making it harder to manage.

Late Saturday, MK Mtanes Shehadeh, chairman of the Balad Party, which is part of the Joint List, criticized Gamzu for his handling of the pandemic.

“The Gamzu program is doomed to failure. It does not address the unique characteristics of Arab society: the critical lack of epidemiological tests and investigations, the lack of tools for enforcement in local authorities and the need for dedicated information in Arabic. There is also no adjustment to the density of construction and schools, and the outline of events is not applicable. Without dialogue and adjustments, it will not work,” he tweeted on Saturday.

“Instead of blaming Arab citizens for the rise in morbidity, Gamzu should take responsibility,” he said, adding more work should be done to increase responsibility before lockdown.

He said the Home Front Command is operating in more than 60 cities in collaboration with local authorities.

At the beginning of the meeting, the committee voted to extend coronavirus emergency regulations for two months at its start.