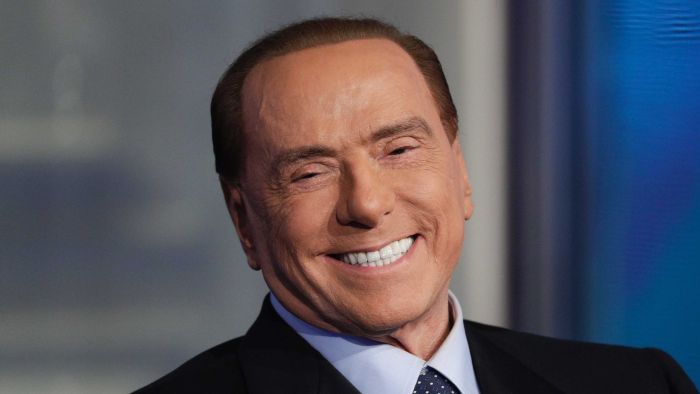 Former Italian prime minister Silvio Berlusconi, 83, is responding “optimally” to COVID-19 treatment but is the most vulnerable type of patient and is in “the most delicate phase” of the virus, his personal doctor says.

Meanwhile, India has recorded another 90,000 cases in the last 24 hours as it closes on Brazil for the world’s second-most cases.

This story will be regularly updated throughout Monday.

Former Italian prime minister Silvio Berlusconi, 83, is responding “optimally” to COVID-19 treatment but is the most vulnerable type of patient and is in “the most delicate phase” of the virus, his personal doctor said.

The three-time leader turns 84 in a few weeks and has had a history of heart problems that required being fitted with a pacemaker several years ago.

He checked into the San Raffaele hospital in Milan early on Friday after testing positive for the virus earlier in the week, at the time he had the early stages of a lung infection.

“The patient is responding optimally to treatment,” Dr Zangrillo told reporters outside the hospital.

“This doesn’t mean we can claim victory because, as you know, he belongs to the most fragile category,” given his age.

Data from Italy’s Superior Institute of Health indicates that men aged 80-87 have the highest COVID-19 death rate among all cases in Italy, at 47 per cent.

With the help of a local fishing boat, hundreds of migrants have been transferred from the tiny Italian island of Lampedusa to relieve severe overcrowding during the pandemic at a residence for asylum-seekers.

After their transfer on Saturday, they must spend 14 days in precautionary quarantine on the ferry.

The vessel was one of several chartered by the Italian Government, after Lampedusa’s mayor and Sicily’s Governor complained about the risk of spreading COVID-19.

After so many migrants arrived this summer, some of them rescued at sea, others reaching the island’s shores without help, Lampedusa’s migrant centre held 2,000 people despite a capacity of less than 200.

Fear of COVID-19 contagion has sparked protests in some of these overcrowded facilities.

Lampedusa Mayor Salvatore Martello said 752 migrants were transferred and the Red Cross said none of them are positive for COVID-19.

The migrants will receive COVID-19 tests once they settle aboard and again at the end of their stay.

After quarantine, the migrants will be taken to a residence on Sicily or the Italian mainland while their asylum applications are processed.

Another chartered ferry is due to take more migrants from the centre, which after Saturday was holding 400 people.

India closer to surpassing Brazil’s numbers amid second wave More than one million cases have been detected in India in less than a fortnight.(Reuters: Francis Mascarenhas)

India saw another record surge of 90,632 cases in the past 24 hours, as infections spread to smaller cities and parts of rural India.

The ministry on Sunday also reported 1,065 deaths for a total of 70,626. More than 1 million cases have been detected in India in less than two weeks.

Dr Randeep Guleria, a Government health expert, said India is seeing a resurgence with over 70 per cent of its nearly 1.4 billion people still susceptible to infections.

“We could say that we are seeing some sort of a second wave in certain parts of the country,” Dr Guleria said.

India’s recovery rate was 77.23 per cent, leading to a decline in fatality rate to around 1.73 per cent , the ministry said. Six of India’s 28 states — Maharashtra, Andhra Pradesh, Tamil Nadu, Karnataka, Uttar Pradesh and Delhi — remain the worst-hit, accounting for 75 per cent of fatalities and nearly 65 per cent of total cases.

The Korea Centre for Disease Control and Prevention (KCDC) reported 167 new cases of the virus in the 24 hours until midnight on Saturday, down from 168 the previous day.

South Korea’s success in crushing early outbreaks of the coronavirus was partially reversed by a wave of infections in mid-August that began at a church.

Cases peaked at 441 in late August but since then tougher social distancing curbs have taken effect.

“With stricter social distancing rules, new coronavirus cases have continued to drift down and we expect to see drops in new cases,” Sohn Young-rae, a spokesman for the South Korean Ministry of Health and Welfare, said in a briefing.

On Friday the Government extended the measures until September 13, saying more time is needed to induce sharper drops in new infections.

The measures have included unprecedented restrictions on eateries in the Seoul area, where the spread is concentrated, banning onsite dining after 9:00pm and limiting coffee and bakery franchises to takeout and delivery all day.

The death toll from coronavirus in Israel has surpassed 1,000, as the Government on Sunday mulled over steps for imposing new restrictions to quell a resurgence in infections.

Israel had earned praise for its early handling of the virus crisis and imposing tight movement restrictions.

Since reopening the economy in May, however, new cases have spiked to record levels and the Government has been blamed for mismanaging the resurgence.

Weekly protests against Prime Minister Benjamin Netanyahu over his corruption trial have expanded to include demonstrations against his handling of the health crisis and the resulting economic pain.

More than 3,000 new cases a day have been confirmed in the most recent spike, raising the spectre of a renewed nationwide lockdown.

Dr Gamzu has issued recommendations for restrictions on numerous so-called “red” cities that have seen the most widespread outbreaks.

Several Arab towns and ultra-Orthodox Jewish neighbourhoods have been hit especially hard and are expected to be included in the list.

Don't Miss it As cases mount, India studying Russian proposal for Covid-19 vaccine | India News
Up Next US coronavirus: The Labor Day gatherings health experts warned against are popping up all over the US