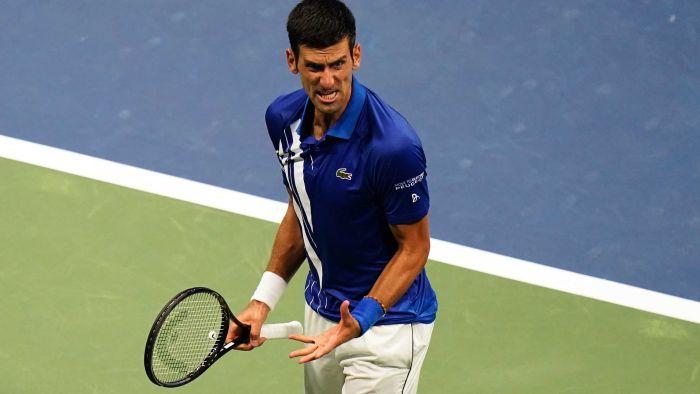 2020 has been a tough one for all of us, but among professional athletes few had a more challenging, controversial and contentious year than Novak Djokovic.

On the court, the world number has been as imperious as ever. In fact, given his US Open exit has come by way of a default, he still technically hasn’t lost a match all year.

But trouble has followed Djokovic this year, even while the success has continued to come. Here’s a quick snapshot of everything the superstar Serbian has been up to.

A ‘friendly touch’ at the Australian Open

Djokovic’s year started well in Melbourne, as he romped to the final before beating Dominic Thiem in a hard-fought five-setter to claim the title.

Despite facing a $30,000 fine for “physical abuse”, Djokovic escaped punishment.

Coronavirus stops his momentum, but Djokovic lends a hand

Victory at the Dubai Tennis Championships in February was his last action before COVID-19 brought the season to an abrupt halt.

Like many athletes around the world, Djokovic’s first move was to offer assistance, pledging 1 million euros ($1.6 million) to help buy ventilators and other medical equipment in Serbia.

With sport starting to look ahead to a post-COVID-19 future, talk had begun of mandatory coronavirus vaccinations for all players on tour — an idea Djokovic rankled against.

“Personally, I am opposed to vaccination, and I wouldn’t want to be forced by someone to take a vaccine in order to be able to travel,” he said.

Novak Djokovic says he is opposed to vaccination and is “keeping an open mind”.(AP: Seth Wenig)

Djokovic later released a statement to add to his comments, saying he expressed his views because he had the right to and felt “responsible to highlight certain essential topics that are concerning the tennis world”.

“I am no expert, but I do want to have an option to choose what’s best for my body,” he said.

“I am keeping an open mind, and I’ll continue to research this topic because it is important and it will affect all of us.”

In the middle of the pandemic, with almost all other professional sport around the world on hold, Djokovic organised a tennis tournament in the Balkans.

He invited a number of the world’s best players, held matches in different locations in front of full crowds and hosted some pretty serious parties at the same time.

Unsurprisingly, lots of people got COVID-19, including Djokovic.

The tournament was cancelled early and amid a sea of criticism and Djokovic was forced to apologise and admit the tournament “was too soon”.

A couple of weeks later, though, Djokovic said that the “malicious” criticism he had faced was unfair, claiming he had been the victim of a “witch hunt”.

On the eve of the US Open, Djokovic joined a group of male players including Canadian Vasek Pospisil and American John Isner in resigning from the ATP Player Council to form the Professional Tennis Players Association.

This new group, they said, would not operate as a union or in conflict with the ATP, but would help players “have our voices heard and have an impact on decisions being made that [affect] our lives and livelihoods”, according to Pospisil.

Roger Federer is not a fan of the breakaway players’ association Djokovic is involved in creating.(AP: Andy Brownbill)

But the ATP was not happy with the move, saying that “now is a time for unity, rather than internal division”.

Both Roger Federer and Rafael Nadal agreed, while Andy Murray said the breakaway group could have become something valuable had it included female players.

Defaulted from the US Open

In the first grand slam since coronavirus put tennis on pause, Djokovic had cruised to the fourth round and in a weakened field was the clear favourite to win the title.

But trailing Pablo Carreno Busta 5-6 in the first set, a frustrated Djokovic took an angry swing at a ball at the conclusion of a point, sending it flying into the throat of a nearby line judge.

Space to play or pause, M to mute, left and right arrows to seek, up and down arrows for volume.WatchDuration: 1 minute 2 seconds1m 2s Djokovic inadvertently hits a line judge, resulting in disqualification (Image: AFP).

The official collapsed to the ground in distress and, despite his apologies, Djokovic was disqualified from the match and the tournament.

After the match, Djokovic said the “whole situation has left me really sad and empty” and again apologised to the line judge, saying the incident was “so unintended”.

Don't Miss it Malaika Arora confirms she has tested positive for COVID-19
Up Next India didn’t prioritize mental health before Covid-19. Now it’s paying the price