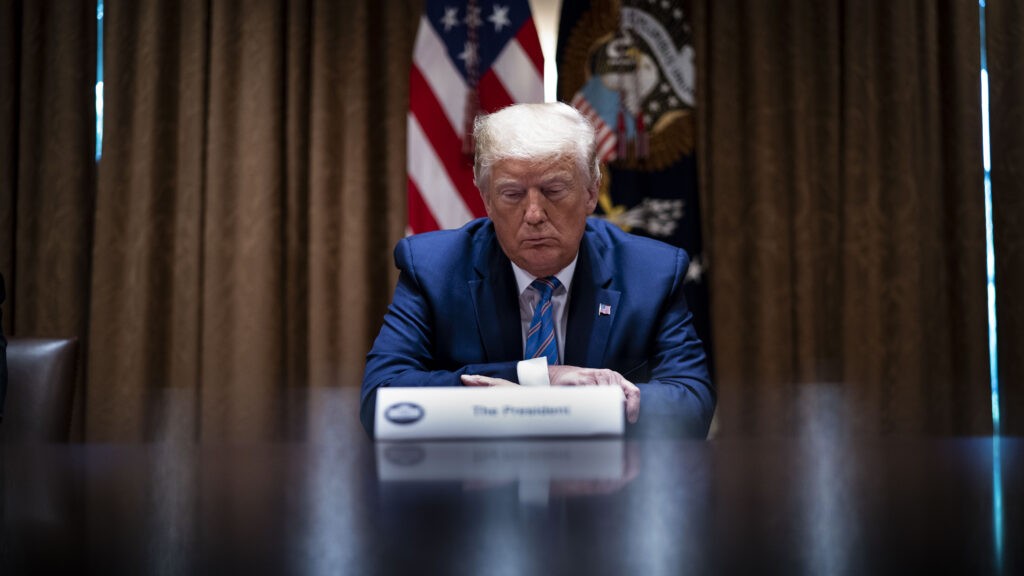 Talk about a rebuke.

President Trump may want a Covid-19 vaccine to ship in time to boost his re-election chances, but the pharmaceutical industry doesn’t appear ready to cooperate — at least, not on his terms.

In a highly unusual turn of events, nine vaccine makers — including some of the world’s biggest companies — plan to issue their own public pledge not to seek government approval without extensive safety and effectiveness data on Tuesday. This follows a fairly similar open letter the BIO trade group released last week warning any vaccine or therapy should only become available with the same sort of “rigorously considered” data.

These are only words, but right now, these are the words that Trump needs to hear.

After Trump has brazenly and transparently bullied members of his own team — most notably, Food and Drug Administration commissioner Stephen Hahn — someone has to draw a line in the sand and push back against him.

There’s good reason. As we move closer to Nov. 3, vaccine makers are still testing their shots. Yet at a Friday press conference, Trump said a vaccine might be ready “maybe even before Nov. 1” or “sometime in the month of October.”

Wouldn’t that be convenient?

The vaccine makers that are signing this pledge — Pfizer, Merck, AstraZeneca, Sanofi, GlaxoSmithKline, BioNTech, Johnson & Johnson, Moderna, and Novavax — are rushing to complete clinical trials. But only Pfizer has indicated it may have late-stage results in October, and that’s not a given.

Yet any move by the FDA to green light a Covid-19 vaccine without late-stage results will be interpreted as an effort to boost Trump — and rightly so.

Consider Trump’s erratic and selfish remarks. He recently accused the FDA of slowing the vaccine approval process and being part of a “deep state.” No wonder there is concern he may lean on Hahn to authorize emergency use prematurely. For his part, Hahn has insisted he won’t buckle to political pressure, but he also said emergency use may be authorized based on preliminary data.

“It’s unprecedented in my experience that industry would do something like this,” said Ira Loss of Washington Analysis, who tracks pharmaceutical regulatory and legislative matters for investors. “But we’ve experienced unprecedented events since the beginning of Covid-19, starting with the FDA, where the commissioner has proven to be malleable, to be kind, at the foot of the president.”

Remember, we’ve seen this movie before.

Amid criticism of his handling of the pandemic, Trump touted hydroxychloroquine, a decades-old malaria tablet, as a salve and the FDA authorized emergency use. Two weeks ago, he touted convalescent blood plasma as a medical breakthrough, but evidence of its effectiveness against the coronavirus is inconclusive. And Hahn initially overstated study results.

Most Americans seem to be catching on. A STAT-Harris poll released last week found that 78% of the public believes the vaccine approval process is driven by politics, not science. This goes for a majority of Democrats and Republicans.

The pharmaceutical industry has to be vocal, though.

Why? The FDA has long been seen as the global gold standard among regulators. No government agency is perfect, but Trump is sadly undermining its credibility. If he keeps this up, it will only make it harder for companies to later point to the FDA as validation for the safety and effectiveness of their products.

This explains why the biotech executives used such pointed phrases as “FDA should maintain its historic independence” and “political considerations should be put aside.” The vaccine makers, however, avoided using any language that might appear confrontational and further provoke Trump. Instead, they underscored a need to “adhere to high scientific and ethical standards.”

Let’s be clear, though. These public pronunciations are not simply altruistic attempts to take the moral high ground. With each tweet and off-the-cuff remark about the vaccine timeline, Trump is eroding whatever confidence the public may have in vaccine makers, which is already questionable as far as some people are concerned.

“The companies are aware that, on a good day, they have trouble selling vaccines to 25% of the country that is suspicious about safety. So the last thing they need is to have Trump pull a stunt and push through a vaccine ahead of its time,” Loss said. “In many ways, the industry is doing a defensive move to ensure they’re not going to have to defend any approval because the president is doing a dance.”

The pharmaceutical industry is keenly aware that its reputation is also at stake as the pandemic becomes more and more politicized.

And simply put, that’s not good for business.

Don't Miss it What you need to know about COVID-19 in Ottawa on Monday, Sept. 7
Up Next Europe divided over Huawei's 5G network | DW News